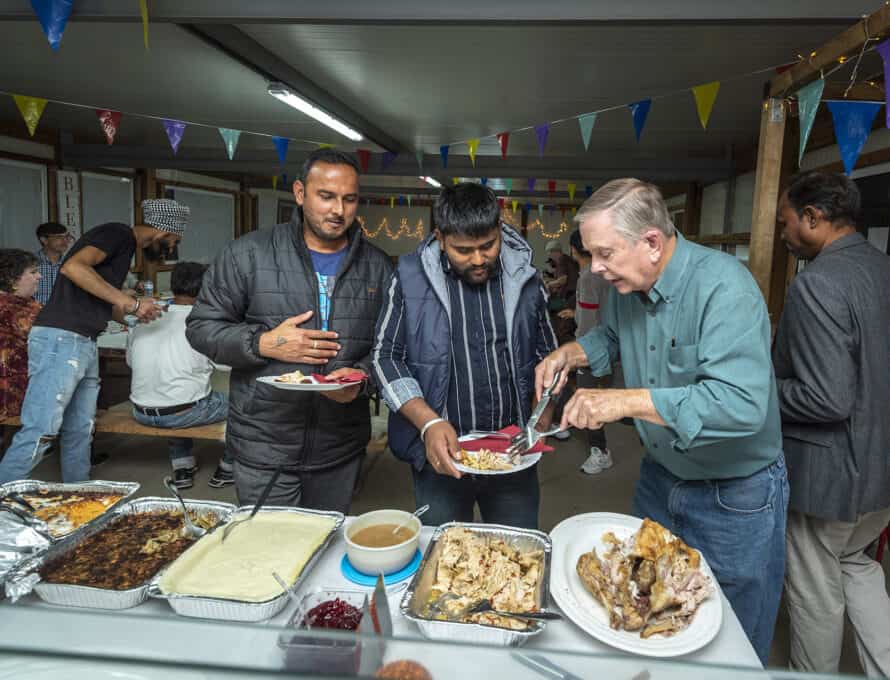 LISBON, Portugal – Bill Falkner serves turkey to some guests at a traditional Thanksgiving meal in Portugal. Travis Avenue Baptist Church partnered with IMB missionaries and Portuguese churches to host the dinners. The team introduced the gospel through explaining what they were thankful for. (IMB Photo)

LISBON, Portugal – Everyone excitedly crowded around the Thanksgiving feast. The tables overflowed with sweet potato casseroles, cranberry sauce, green bean casseroles, pumpkin and pecan pies. The turkey was roasted to a perfect, mouthwatering golden hue. Juice rolled down the sides of the meat dish as someone carved.

It was picture perfect. Phones immediately came out of pockets to document this not-so-traditional feast in Lisbon, Portugal. For most, it was their first time experiencing an American Thanksgiving outside of watching a movie. It was also the first time for some to hear what the hosts of the feast were most thankful for — Jesus’ saving grace. 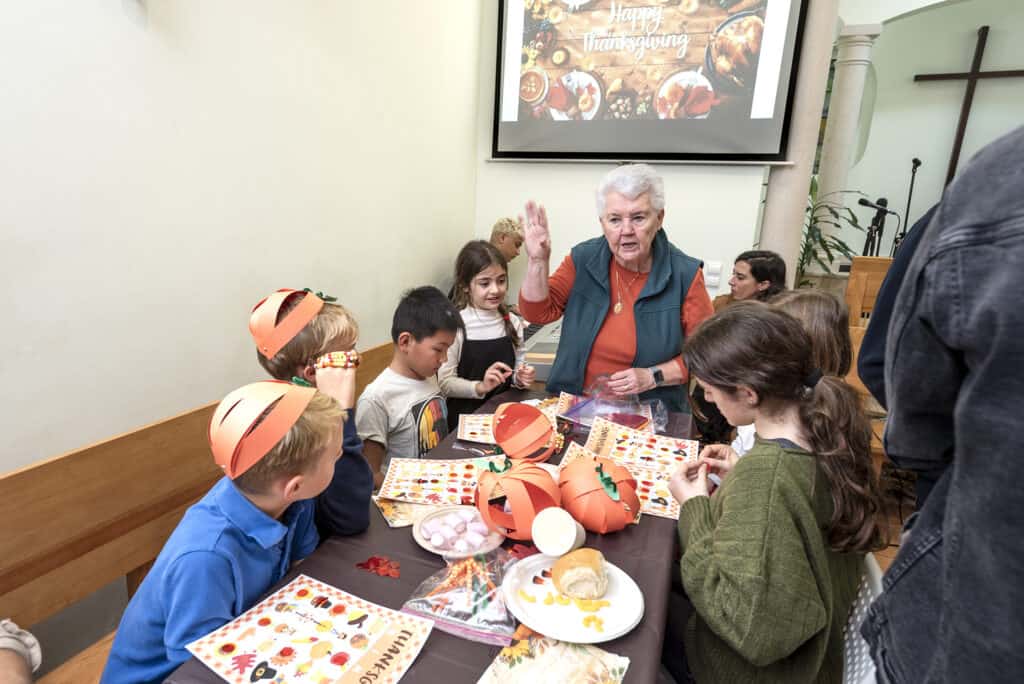 LISBON, Portugal – Frankie Falkner explains how to create a Thanksgiving craft to a group of children in Lisbon, Portugal. The volunteer from Travis Avenue Baptist Church, Fort Worth, Texas, used craft time as a way to share Bible stories. (IMB Photo)

A volunteer mission team from Travis Avenue Baptist Church, Fort Worth, Texas, prepared 13 Thanksgiving meals in one week to help IMB missionaries Jonathan and Bethany Sharp and local Portuguese believers gain gospel access within their community. Cans of pumpkin and cranberry sauce stuffed in the Texans’ luggage turned into opportunities to share the good news of Jesus Christ and be invited back.

The Sharps hosted their first Thanksgiving in Portugal nine years ago when they were in language school. They used it to meet their neighbors and practice Portuguese. With each passing year, the event grew larger with teams from churches in the U.S. coming to help. It became a way to share the gospel in a non-threatening way and mentor local believers.

This year, the team from Travis Avenue made it possible to take the festivities outside of their home and church, Igreja Baptista Vida Nova. They partnered with small groups and four church plants to host the cultural exchange in different locations.

Europe is considered the least reached continent in the world with less than 1% evangelical Christians. Together, a praying church back in Fort Worth, their short-term missions team, IMB missionaries and local believers addressed a very real problem in Portugal — lostness.

“In one week, we can get more contacts of those open to gospel conversations than we can going out every day for a year on our own,” Bethany said. The team fed close to 370 people, with more than half being unchurched people invited by their friends. “This is an opportunity to be hospitable and be [Christ’s] hands. Talking about culture and food is a great way to connect.”

Randy Roberts used a historical presentation about the American holiday to teach culture and entertain. The volunteer from Travis Avenue explained his family often tells what they are “most thankful for” when gathered for Thanksgiving meals. Roberts shared he was thankful for Jesus and explained why by giving his testimony.

Attendees sat enthralled by the stories. Bethany said one reason there was an easy bridge to the gospel was because the Portuguese instinctively understood the Texans spent a lot of hours preparing food just for them to experience an American-style Thanksgiving. The team began cooking early each day, sometimes making two feasts to send in different directions.

“The responses to something as simple as a Thanksgiving meal was so exciting,” volunteer Melody Freeman said during a short break from cooking.

The Texans received hugs, handshakes and a lot of “thanks yous,” but their favorite response was when they found someone open to hearing the gospel. Bill Falkner was able to share one-on-one with many people without being “in your face aggressive, he explained. He, however, was most excited about working alongside local believers the entire week.

“We’ve been able to give a shot of encouragement to fellow believers and local pastors,” Falkner said, of his team from Travis Avenue.

“God is raising them up. We just came to help.”

Each Portuguese church has plans to follow up with guests after the feasts. Working alongside the Texans gave them a boost in confidence. They saw they could make a spiritual impact on their community.

“This is what these Thanksgiving dinners do. It allows us to meet people we’ve never met, share the gospel and have a connection to invite them to Bible discovery groups,” Bethany said. “All heard the gospel.”