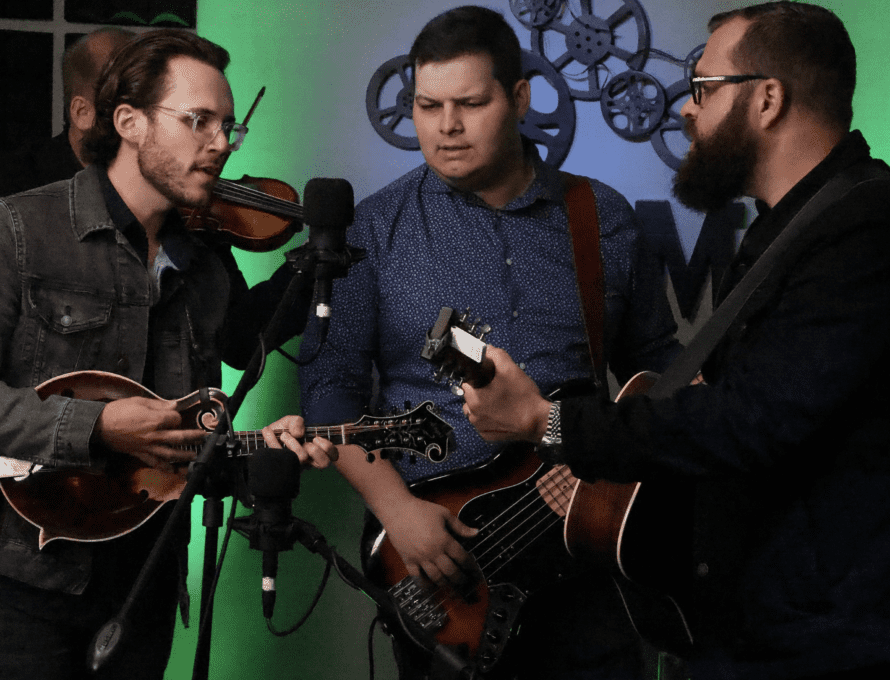 Hailing from West Virginia, Chosen Road is known for their Appalachian-bluegrass musical style, which they use to “reimagine” classic Christian worship songs.

The band’s most recent albums, “Appalachian Worship” and “Appalachian Hymns,” both reached the top 5 on Billboard’s Top Bluegrass Albums chart.

The band has been touring together for 13 years, and for the last seven, their most in-demand dates have come from their annual Christmas tour.

Founding member Jonathan Buckner said the band has always wanted to record a Christmas album, but wanted to do it a Christ-honoring way.

“When we started the tour seven years ago, we really tried to pick songs with substance, meaning they were about the Gospel message and the true story of Christmas,” Buckner said.

“We could sing a bunch of more fun Christmas songs that people love, but once the audience leaves that’s really it. If we can give them fun paired with the Gospel message, then that’s something that hopefully they will take home and have the rest of their lives.”

It is also features several notable collaborations with artists including Guy Penrod, Point of Grace, Jimmy Fortune and Allan Hall of Selah.

Zachary Alvis, Chosen Road’s other founding member, said the group is thankful for all of the collaborations and for the hard work that was put into the record.

“For a musician, Christmas is fun but also daunting,” Alvis said. “I really love the songs that we picked out, and I think it’s a really unique approach that hopefully brings something fresh to the music and blesses people.”

Buckner said the Christmas season is exciting because of the ministry opportunities it provides.

“It’s a time that we can kind of interject the Gospel into popular culture,” Buckner said. “In addition to churches, we can get into a lot of doors with audiences of people that may not be believers, and we can truly share the Gospel, the true meaning of Christmas.”

Using their music as a form of outreach and encouragement has always been a passion for Chosen Road, specifically with smaller local churches that are in a revitalizing season.

The group is extremely close with Mark Clifton, senior director of Replanting for the North American Mission Board.

“Watching God working through us in that way has just been amazing, and it doesn’t have anything to do with music,” Buckner said.

Most recently, the band was asked by Clifton and the Replant team if they would produce a song to serve as the theme music for the Rural Pastor Podcast, which tackles issues revitalizing churches often deal with.

The title-less song has not been officially released by Chosen Road, but is available for free download through on the podcast’s website.

Buckner said they have already heard stories showing the impact of the song.

“The response has been amazing,” Buckner said. “There has not been a week that has gone by since that song went live on that podcast that we don’t get an email from a pastor. One guy messaged us saying he was in tears because it was so raw and hit him in such a real way.

“To be able to write a song that means something to those guys that are out there in the trenches barely hanging on trying to turn things around for the glory of God; to have the opportunity to encourage them specifically through song is really special.”

Chosen Road’s passion for helping replanting churches extends to their upcoming Christmas tour, where they will play songs from their album in churches across the country.

As a part of the tour, the band will be gifting three different churches a free Chosen Road concert to use as an opportunity to reach out to the churches’ surrounding communities.

Buckner said helping minister to these churches has reminded the group about the redeeming power of God.

“We can tell stories of churches that went through heartbreaking tragedy where sin came in and totally wrecked the local church, but we’ve seen God restore and reconcile,” Buckner said.

“We are able to see these things first hand that prove that God is faithful and He can do it, if we die to ourselves. He is willing, ready and able to work through His Church, we just have to get out of the way.”