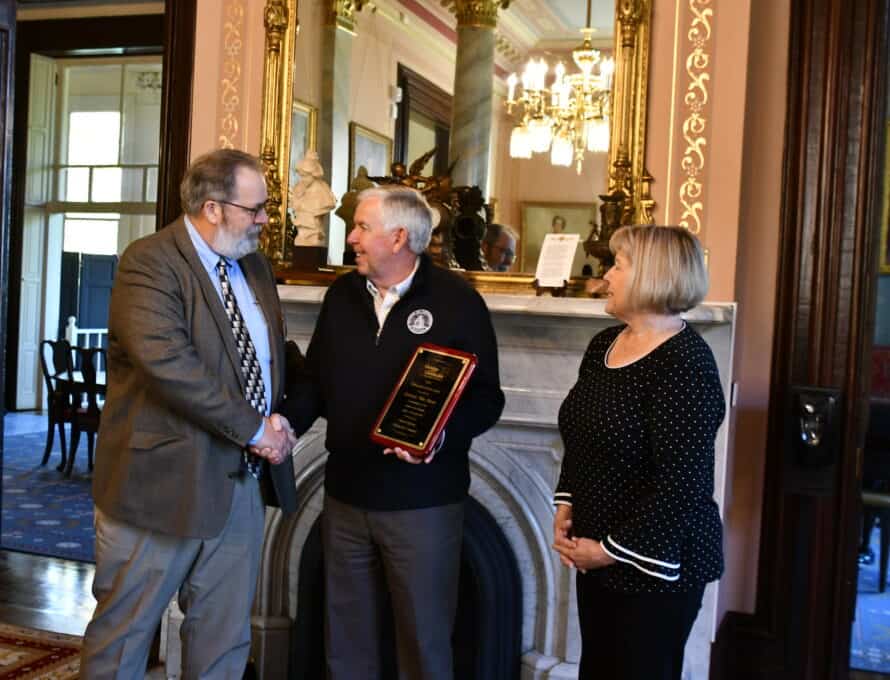 JEFFERSON CITY – The Missouri Baptist Convention’s (MBC) Christian Life Commission (CLC) awarded its 2022 Distinguished Service Award to Missouri Governor Mike Parson – in recognition, especially, of his efforts to uphold the sanctity of life within the state.

Parson and his wife, Teresa, are members of First Baptist Church, Bolivar.

The Parsons hosted members of the CLC for a luncheon at the Governor’s mansion in Jefferson City, Oct. 26, after which the commission presented the award.

“Your legacy as Governor of Missouri is marked by a very clear and consistent support for life,” CLC chairman Timothy Faber, director of missions for the Lake of the Ozarks Baptist Association, told the Governor and First Lady.

After listing several pro-life initiatives the governor supported, Faber added, “Your legacy was cemented by HB126. This legislation placed the toughest restrictions on abortion yet, and also included certain ‘triggers’ that would go into effect if the U.S. Supreme Court (SCOTUS) were to ever overturn Roe v. Wade.

“So, on June 24 of this year, within minutes of when SCOTUS handed down their decision in the Dobbs case, actually overturning Roe, you signed a proclamation giving legal effect to those triggers in HB 126, making Missouri the first state in the nation to end abortion on demand.”

Receiving the award with gratitude, Gov. Parson told CLC members, “One of the bigger honors you have every day (as governor) is to go up there to do your part and make sure that somebody has a chance and somebody has a hope, and nobody takes it away from them.

“All life is important,” he added. “It’s precious, and it’s given to us by a Creator. And we should never second-guess that. … Thank you very much for giving this to me, and I can tell you we are going to continue to find ways to work and help with this going forward.”