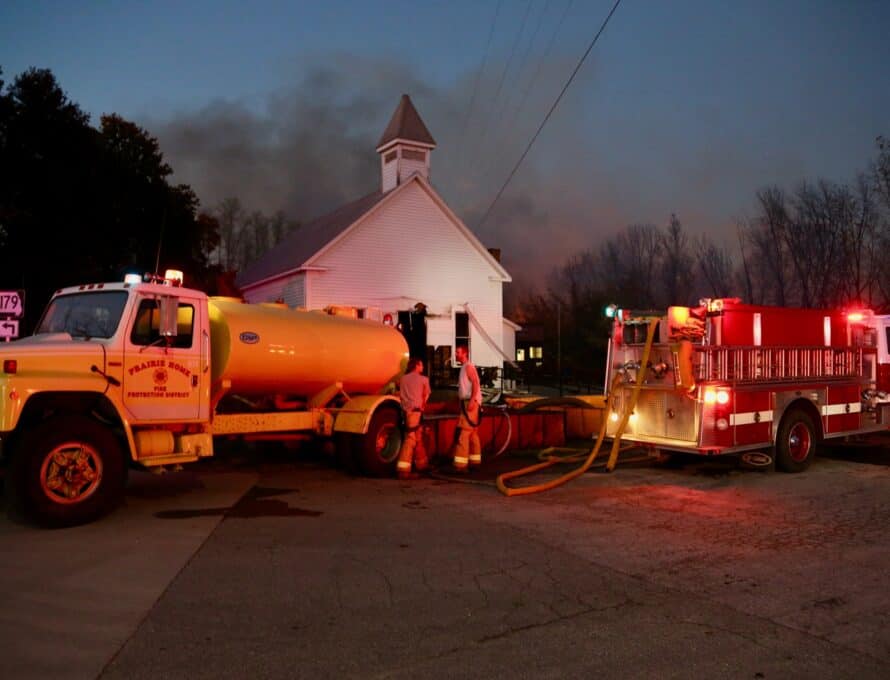 WOOLDRIDGE — The town of Wooldridge was almost destroyed by a raging wild fire on Saturday, Oct. 22. Here, the Wooldridge Baptist Church is shown behind the fire trucks. The church suffered damage to its floors and extensive water damage. Officials believe the building structure was saved and can be rebuilt. Fifteen families were displaced in the town and are sheltering in a Baptist church in a nearby town. (Photo courtesy of Cooper County Fire Protection District. https://www.facebook.com/CCFPDMO/photos/pcb.5698208583581882/5698206493582091.)

WOOLDRIDGE – A raging wildfire on Saturday, Oct. 22, swept into this Cooper County village, nearly destroying the community and severely damaging the Baptist church building. Wooldridge is a community of approximately 40 residents. The fire started in a nearby grain field, which was ignited by a malfunctioning combine.

Fifteen to 20 buildings were destroyed or damaged by the fire, according to the Columbia Missourian newspaper. The Wooldridge Baptist Church was damaged, but officials report the fire was mostly confined to the floor. The building had extensive water damage to walls and ceilings.

Firefighters were able to quickly remove the stained glass windows in the church building in order to protect them.

Pastor J. Wayne Merrill said the church was being protected by the fire department. The town’s Post Office sits beside the church and it was spared along with a school building.  He said much of the rest of the lower portion of the town burned except for a few buildings.  The lower portion of the town had been badly damaged by the 1993 flood, and most of the commercial buildings there were unoccupied.

There is an upper portion of the town (built above the flood plain) that was largely unaffected by this fire.

Merrill said the church was being spared from the flames that were taking out buildings all around them, but then the floor started smoldering and had to be extinguished. That caused water damage to the walls and ceilings.  He believes the general structure of the building is still intact and can be repaired.  He was hopeful it will not be a total loss.

The church is still determining where they will meet for services next Sunday. They have options with several nearby churches, and possibly they could meet in a church member’s home in the town. Merrill said, generally, about 15 people attend worship there.

According to Concord Baptist Association Director of Missions Alan Earls, the church is a historic building.  Associational historian Roy Dameron reported the church was established in 1900 and built the building in 1905.

Earls said, “They are a resilient church that loves the Lord. Though they are small in number they love Jesus, and I believe they will see the light of Christ (continuing to) shine in Wooldridge.”

The church has property insurance, and they hope that will cover the damage.  Earls added there are volunteers in the association who can offer help to repair the damage.

Pastor Merrill was still feeling a sense of grief and pain for the people in the community who had their homes burned down and were displaced by the fire.  He thought that about 15 family homes were destroyed by the fast moving fire.  As of Sunday, Oct. 23, officials said seven families were in shelter set up in a Baptist church building in rural Booneville. The authorities said 20-25 buildings were burned or destroyed.