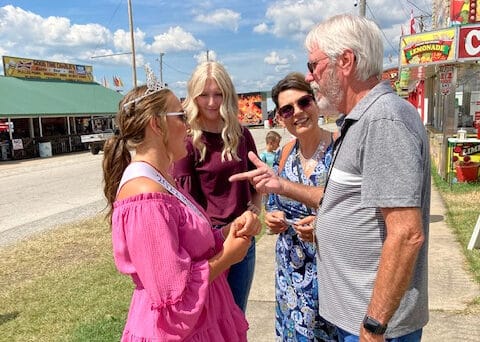 SEDALIA – Missouri Baptist pastor Russ Slocum gives a gospel bead bracelet to Elsie Kigar, the State Fair queen for 2022. Kigar is from Memphis, Mo. Slocum, pastor of First Baptist Church, Otterville and he is president of Lamine Baptist Association. He was co-coordinator of the fair ministry this year. (Pathway photo by Richard Nations)

SEDALIA – Seventy-eight people prayed to receive Jesus at the Baptist Tent during the Missouri State Fair.

The mid-August fair runs for ten days and Baptist volunteers were there every day asking people if they wanted to sign up for a gift card.  The people agreed to listen to the volunteers for three minutes while they shared their story of how they met Jesus.  And an average of almost eight people per day agreed to pray and trust Christ with their lives.

Fourteen made a recommitment to the Lord and two more inquired where they could find a Baptist church in their community.

Russ Slocum, the co-chairman of the state fair ministry committee of the Missouri Director of Missions Fellowship, said they gave out 3,000 gospel bead bracelets this year.  He said there were 190 volunteers from 18 Baptist associations and ten local churches who shared Christ at the tent this year.

The number of salvation decisions is a little more than double the totals last year, which were 35.  Slocum said the gospel was shared 1,043 times this year.

Three people were selected to receive the $1,000, $500 and $250 gift cards to one of eight different retailers. The winners could select the retailer of their choice.

Slocum, who is also pastor of First Baptist Church, Otterville, and is the president of the Lamine Baptist Association, said two words really encompass the state fair ministry to him:  “follow me.”  He said it is more than the gospel being shared.  “I saw something happen to the volunteers, …many of whom were sharing their faith for the first time.”

He said some were telling him they “did not believe they could do it (share their faith) but they did and the gospel went out.”

When a person makes a decision to follow Christ in the tent, their information is relayed to a church in their community with a request that the pastor follow up and lead them to be baptized and discipled.

Slocum added that people were coming into the tent from all walks of life, and they were looking for “a little bit of hope, peace and the love of God.”

He and the other members of the state fair ministry team expressed appreciation for the many volunteers from across the state who helped the ministry function well.  Slocum said he hopes Missouri Baptists will be thinking about coming back to serve next year.”

The tent ministry is funded by Baptist associations, the Missouri Mission Offering funds and some private donations.