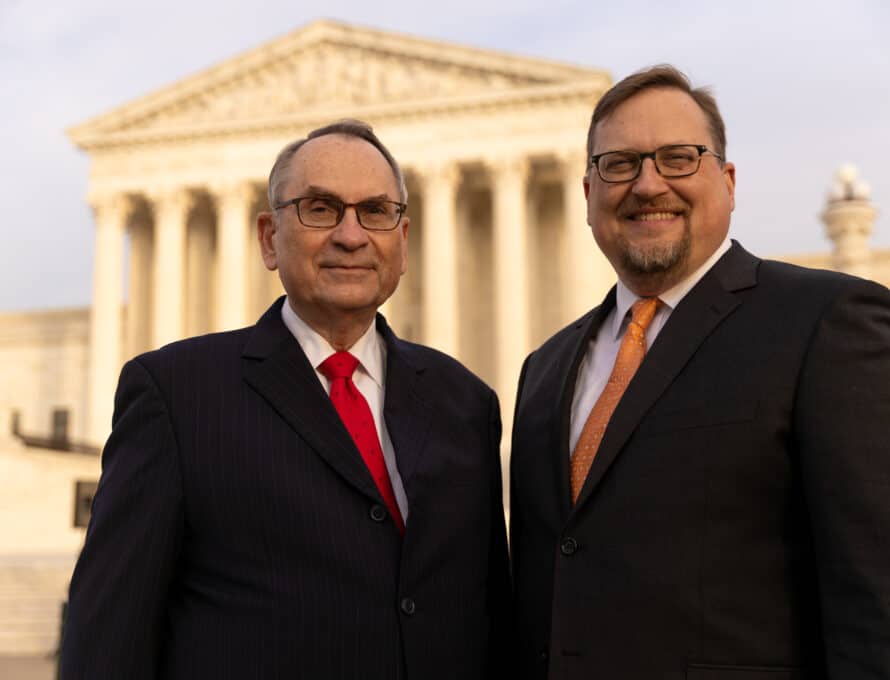 Missouri Baptist attorneys Mike and Jonathan Whitehead, from Kansas City, helped to defend parents in Maine who were denied access to Maine's state tuition aid program because they wanted to send their children to a private religious school. The United States Supreme Court said, June 21, that Maine's actions toward these religious families were unconstitutional.

In doing so, the Court extended the principle of “equal access” to parents seeking school choice, a ruling which may encourage tuition aid programs across the country and may open the door to thousands of low- and middle-income families to have the ability to direct their children’s education as they see fit.

In Carson v. Makin, two Christian families in rural Maine sought equal access to a state tuition aid program that provides funding to parents in rural counties where there are no public high schools, to choose private schools anywhere in the world.  Maine calls the program “town tuitioning” and had, for over 100 years, treated religious schools the same as other private schools.  However, in 1980, a state attorney general wrote a memo saying the state must exclude robustly religious schools that actually teach religious values desired by parents.  The legislature eventually amended the “town tuitioning” law to add a “sectarian exclusion,” limiting parental access to the funds if the school would actually use the funds to provide a religious education.

Attorneys Michael and Jonathan Whitehead are part of a legal team that represented the parents from the trial court to the Supreme Court.  The father-son legal team are Southern Baptists from suburban Kansas City, Mo. They joined with attorneys from Institute for Justice and First Liberty Institute in filing and trying the lawsuit in Maine federal court in 2018, then appealing to the First Circuit U.S. Court of Appeals in Boston, and then appealing to the U.S. Supreme Court.

Jonathan Whitehead commented, “The ruling released today is a breakthrough precedent for equal access for parental choice in education, and we hope it will benefit parents across the nation with other programs for school choice.”

“We congratulate Dave and Amy Carson of Glenburn, Maine,  and Troy and Angela Nelson of Palermo, for their courage and commitment in standing up for liberty. Alan and Judith Gillis, of Orrington, Maine, were also parties at the trial level, but were removed from the case when their daughter graduated from Bangor Christian Schools.  We are grateful to each family and pray God’s blessing on them and their children.”

“The State allowed parents to choose religiously affiliated schools, where chapel was used for student assemblies, but not for spiritual formation. But if a regulator in Augusta, Maine, decided a school was ‘inculcating faith’ or teaching every subject through the lens of faith, then that is ‘too religious’ and was excluded as ‘sectarian.’

“Justice Breyer argues the religion clauses are there to prevent religious wars,” Jonathan Whitehead continued.   “But that would come as a surprise to many Americans, who think the religion clauses are there to protect free exercise of religion as a positive value, to prohibit government interference or discrimination as a negative force. Further, the Augusta regulator is clearly entangled in religious line-drawing, leading to controversies like this lawsuit.”

Jon Whitehead quipped, “He apparently has never met the Baptist women I have met.”

The Carson case takes a major “next step” in the developing precedents involving “equal access” to public benefit programs. The elder Whitehead was co-counsel in 1981 in the case of Widmar v. Vincent, 454 US 263, which established the principle of “equal access,” the right of a religious student group to meet in the student union on a public university campus alongside secular student groups, without discrimination based on their religion. Widmar was decided on Dec. 8, 1981, 40 years to the day from the oral argument date in Carson.

Thirty-six years after Widmar, the younger Whitehead was also at counsel table with the ADF legal team in the case of Trinity Lutheran Church of Columbia, MO, v. Comer 137 S. Ct. 2012 (2017) in which the state had denied equal access to a public grant program to re-surface private playgrounds. Any non-profit group with a playground could apply for a grant– except for religious groups like Trinity Lutheran. In 2017, SCOTUS ruled, 7-2, in favor of the church, saying the discriminatory denial of equal access to a general public benefit because of the applicant’s religious status was unconstitutional.

Following the Trinity Lutheran win, the Whiteheads were contacted by Maine resident Danny Dalton, a Baptist grandparent who had read Baptist Press reports of the church playground case.  He asked the Whiteheads to consider a challenge to the Maine law based on the equal access precedents. The Whiteheads joined forces with the other public interest law firms to bring this action, which could become the capstone third case in their “equal access” trilogy.

Jon Whitehead summarized, “Trinity Lutheran and Espinoza said the State cannot discriminate against the religious ‘status’ of being a church or religious school.”

“The Court’s elimination of the “status-use distinction” means that the infamous Blaine Amendments that exist in around 37 states have been effectively neutered – at least as applied to religious schools.”

Of the 260 school districts in Maine, 143 operate no public high school. Students either travel to a neighboring town with a public school, or they can attend private schools anywhere in the world and use Maine tuition aid. Except for private schools which teach religion.