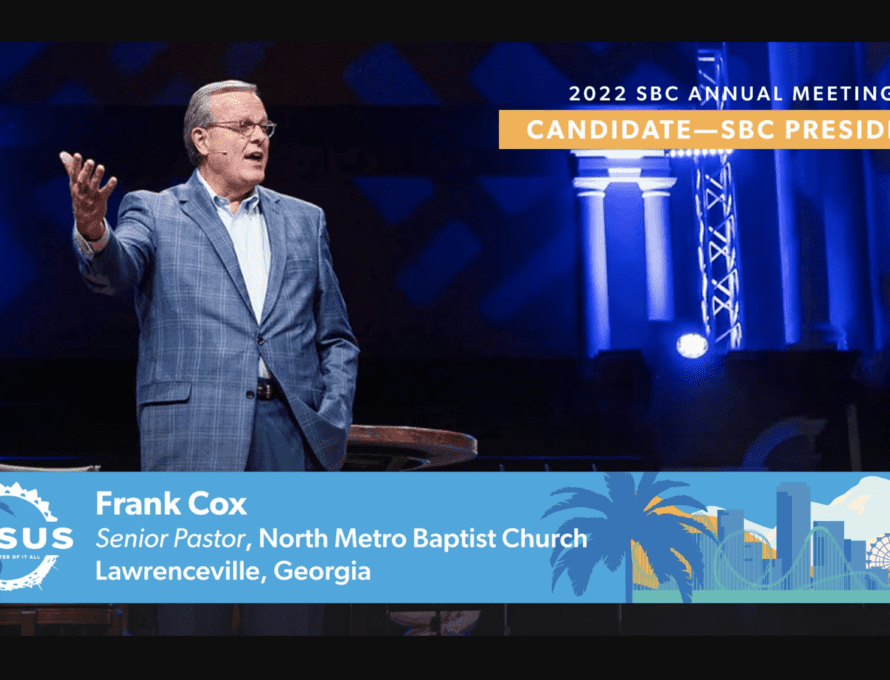 Cox joins Tom Ascol, Bart Barber and Robin Hadaway as announced candidates for the position with the election scheduled to be held in the Tuesday afternoon session of the 2022 SBC Annual Meeting.

Pastor of North Metro Baptist Church in Lawrenceville, Ga., since 1980, Cox is no stranger to Southern Baptist life and leadership in the Convention. He most recently served as a trustee for New Orleans Baptist Theological Seminary from 2011 through 2019, chairing the board from 2017-2019. He also chaired the search team that brought current president Jamie Dew to the school in June 2019.

In addition to his service on the board of NOBTS, Cox served as a member of the SBC Executive Committee from 1997-2006. He was elected SBC first vice president from 1999-2000 and also has served as president of the Georgia Baptist Convention (1997-1998). Cox also was a candidate for the SBC presidency in 2008 when Johnny Hunt was elected without a runoff. Cox finished second with about 22 percent of the vote.

According to Annual Church Profile information, North Metro reported 26 baptisms in 2021 and averaged 597 in weekly worship. The church collected $3,526,548.90 total undesignated receipts and gave $229,167 (6.5%) through the Cooperative Program. The church also gave $30,200 to the 2021 Lottie Moon Christmas Offering and an additional $10,100 to the Annie Armstrong Easter Offering.

Cox, a native of Tallahassee, Fla., is a graduate of Mercer University and has an M.Div. from NOBTS and a D.Min. from Luther Rice Seminary. He and his wife, Mary, have three children and five grandchildren.