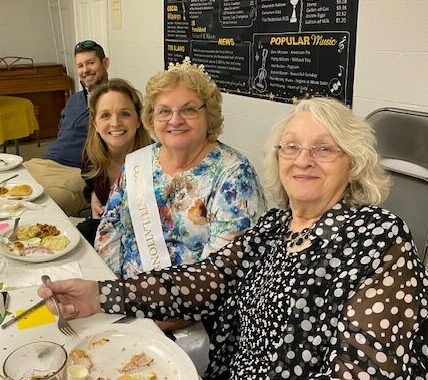 POPLAR BLUFF – Saralie Morgan, second from the right, was honored this spring for serving as church secretary at Second Baptist Church here for the past 50 years. She is sitting here with (from left to right) her son-in-law Jon Mabry; her daughter Laura Mabry; and her sister, Marilyn Johnson. (Submitted photo)

POPLAR BLUFF – Celebrating the Golden 50th Anniversary of Saralie Morgan as the church secretary at Second Baptist Church of Poplar Bluff, Missouri is a fitting tribute. Morgan has woven the golden thread of her life through the history of the church.

“She truly loves her church,” Terry Glidewell, best friend, and office manager at First Baptist Poplar Bluff, said. “She will do anything servant-wise to meet the needs of the church.”

Glidewell continued by listing just a few of Morgan’s ministries. “She plays the piano for worship; she takes on many of the decorating tasks for the church and she always makes events like the hanging of the green a churchwide event. She always makes sure everyone is included. She is also highly active with the children,” Morgan continued. “She always teaches Bible class, directs children’s camp and make Vacation Bible School fun for the children.”

Pastor Curtis Crowley agreed with Glidewell on Morgan’s service. “Saralie is a special person and I have the utmost confidence in her,” he said. “She is a kindred spirit and the person that I can talk to about anything. She is constantly on the ‘fire patrol’ in that she anticipates issues and keeps people from getting hurt.”

“She’s a big part of the church,” he continued, “she has been here since she was a kid, and she is always smiling. She is happy even if I drink a root beer of hers from the refrigerator,” he confessed.

“I served with Saralie on the board of the Missouri Baptist Secretary Association,” she said, “when we attended the National Secretaries Conference at Ridgecrest, I was her roomie. She is a vibrant individual and a jewel at her job. We had so much fun as roommates and she and Terry Glidewell did skits together; it was wonderful. They brought lots of laughter to us, but it always had a biblical sense to it. It was fun because of the love of Jesus in us.”

The church recognized Morgan with a special surprise reception. One of the planners, Nelson Wallis, deacon at 2nd Baptist Church, admitted that keeping it secret was the most difficult part.

“We had meetings to plan,” he said, “but, most of the planning involved the surprise. Saralie prides herself on knowing what is going on, so a week before the reception, we presented her with a small plaque, and she was pleased. The decorating and getting ready the day of the reception was the most difficult, we told her that we were getting ready for a young adult event.”

Wallis was keeping track of Morgan’s anniversary. “I knew at her 25th anniversary that we would need to remember her anniversary,” he said, “so, I wrote the date down on a piece of paper and put it into my glove compartment. Saralie is the one who remembers everyone, so we didn’t want her anniversary to get by us.”

“I count my anniversary as March 1,” Morgan said, “because I actually started on February 29, 1972, which was leap year.”

“Things were much different back then,” she said. “We used old-style typewriters, mimeograph machines with all the messy ink pads, and certainly did not have computers!”

Although Morgan learned to use computers, Wallis says she is still skeptical of technology. “She was forced to adjust to the recent technology not because the software makes her job easier, but because repair parts for the old machines were no longer available. But, if you go down to church on Friday, she is still folding the bulletins by hand.”

Karen Wallis, Nelson’s wife, and member of Second, described her caring personality. “Everyone respects, Saralie,” she said, “she has a caring heart and always lends a tender ear. She wants to help them in their walk and to be strong.”

Crowley described a testimony of a young woman at the reception. “People came from years ago,” he said. “This young lady stood up and said, ‘I was on drugs and Saralie prayed for me. I remember her praying for my safety. She believed in me and prayed that I would stop and get on the right path. I am happy that I did.’”

Morgan loves her job. “A lot of things have changed in the last fifty years,” she said, “But one thing has not changed, the love of our church family. The people of Second Baptist have such loving hearts and have made my job easy.”

She does not plan to retire. “I don’t have plans to retire any time soon,” she said. “I have always felt that God put me here. He will let us all know when it’s time for me to let go.”