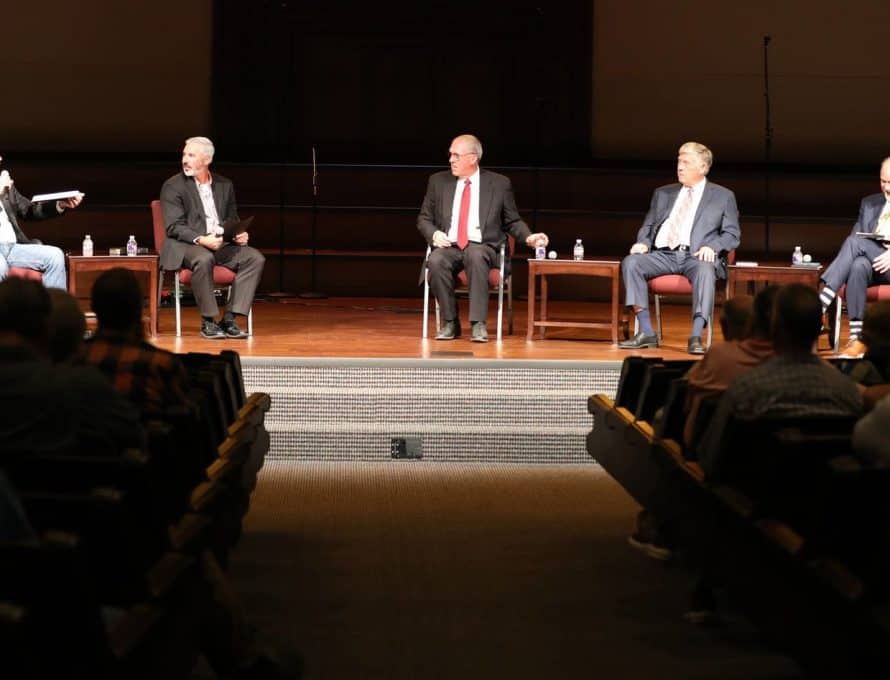 KELLER, Texas (BP) – Critical Race Theory and financial transparency were among topics addressed by the three known candidates to be nominated at the 2022 SBC Annual Meeting in Anaheim. The candidates participated in a forum hosted by FBC Keller on May 4 and moderated by Joe Wooddell, a member of FBC Keller, and Tony Richmond, FBC Keller associate pastor.

What is Critical Race Theory (CRT)? Is it manifesting in churches and the SBC? What should the SBC president do about it?

“So, all you have to know about CRT to be ready to walk away from it is that it proposes some ideas of what justice is that are at odds with the Judeo-Christian idea of justice that’s been passed down into American jurisprudence.” Barber said, adding that he believes many Southern Baptists struggle to understand what it is.

“I don’t think we have to espouse secular ideologies just to be kind and welcoming to churches that are on the fringe in the Southern Baptist Convention,” he said. “I think we ought to work to try to build our fellowship stronger and stronger and to invite more and more people to come to be a part of this great family of churches. I think that’s the president’s role in helping to show the difference between CRT and just not being a jerk or just not caring about people who on the fringe, but trying to bring people in.”

In a follow up question, Ascol asked Barber if he thinks “that it’s possible that those folks who are saying, ‘No, we don’t believe in CRT,’ really don’t think they are, but could have well imbibed the ideas of CRT just as being a part of this culture where it is so preeminent?”

Barber pointed back to the need for a clear definition of CRT. “I think we ought to talk to each other in such a way that we’re only ready to start debating something when we can say what the other person’s viewpoint is so well that they say, ‘Yes, that’s exactly what I believe.’ Then we’re ready to have those conversations. So it’s best, I think, to talk about the issues, issue by issue, before we’re just tossing labels around.”

Ascol spoke next and offered a definition of CRT.

“CRT is an offshoot of neo-Marxism, postmodernism and a theory that came out of a critical legal theory. And it basically says that all racial relationships should be viewed in terms of power dynamics and that some are inevitably oppressed and others are inevitably the oppressors.”

He said it is in opposition to biblical theology, “And so it takes the idea of sin partiality from the Bible and redefines it in ways that are completely unbiblical.”

Ascol also blamed the 2019 SBC Resolutions Committee for the discussion in current SBC life. “… [T]his wouldn’t even have been a conversation among us if the Resolutions Committee in 2019 rewritten a resolution that was submitted to renounce critical race theory and intersectionality. They rewrote it to affirm critical race theory and intersectionality and then we were told, ‘No, they’re just good analytical tools.’ And that was a disaster for the SBC and it was tragic that it happened.”

Ascol alluded to three examples of SBC seminary professors who had spoken or written about CRT or LGBTQ issues in ways that he alleged were in violation of biblical doctrine.

“We have boundaries and the Baptist Faith and Message certainly points out our doctoral boundaries, but I do believe just like we saw in the Conservative Resurgence, there are a lot of people were saying, ‘Oh, we believe the Bible. We believe the Bible.’ They’re not thinking as rigorously as they need to be thinking about exactly what does the Bible say? And so that’s part of my concern with this. I’m grieved over what I see happening. I don’t, it’s not a matter of partisanship with me, it’s a matter of deep conviction that we must change the direction right now.”

Barber asked Ascol, “Haven’t all of those people come back and said, ‘Hey, that’s not really accurately representing what I think and what I believe’? “What are we supposed to do when other people ask for that right [to clarify their statements]?”

Ascol responded, “Well, and I would be delighted for that, but the clarifications have not clarified.”

Hadaway said, “Critical Race Theory does view everything by race. … CRT is the cultural problem of the day, but we have to be careful that we aren’t seen as unsympathetic to the problem of racism in the United States and everywhere in the world.”

Ascol claimed to have submitted several churches to the Credentials Committee and said he never heard back. “I don’t know if they investigated them or what they did or what the disposition is,” he said. “That’s one thing that needs to change because if there’s something that is risen to the level of actually making a report and asking for an investigation, I think that the church that makes that request deserves the courtesy of a reply to let them know the disposition of that request.”

He said he feels sorry for the members of the committee because “they have a task that is unmanageable given our structure.”

He believes repairing the system will require some of the SBC’s top thinkers.

“I think what we’re going to need is some of our best theological minds to come together and to think through, ‘OK, here’s, here’s what we can do, given our polity, that we are fully convinced is biblical and here’s some history examples, from like the Philadelphia Association, how they did things very much like this. How can we now structure in our day a task force or a committee that will be able to do these things and give them the tools to do these things that need to be done in a convention of churches of 47,000-plus,” he said.

In 2019, Messengers voted to amend the SBC’s bylaws to repurpose the SBC’s Credentials Committee into a standing committee to make inquiries and recommendations for action regarding instances of sexual abuse, racism or other issues that call a church’s relationship with the SBC into question. The work handled by the previous Credentials Committee, on which Hadaway served in 2000, is now handled by the Registration Committee.

“It will work so much better if you go to your local association saying, ‘We need our Credentials Committee to be vibrant and active and doing the right thing there,” he said. “Your state convention will rise up and call you blessed if you do that. And the national convention will be so much healthier.”

Barber said associational credentials committees began to wane during the Conservative Resurgence. “The backbone of the local association needs to be restored so that we’re not trying to do this at the national level.”

Is there work to do related to the financial disclosures of SBC entities?

Ascol was the first to answer saying he believes there is much to do in this area. He called for forensic audits to be performed by the entities because trust has been broken and alleged crimes may have been committed.

“This would be an audit that is designed to look at the laws, the SEC, the state laws, local laws, federal laws, making sure those practices financially have been in accordance with the laws,” he said. “If there’s any discrepancies and what’s reported or what’s on the books and what is discovered, those discrepancies are investigated. And so, a forensic audit could well discover that crimes have been committed. And if so, they can be rectified. I mean, that doesn’t mean that somebody has to go to jail. Maybe there just needs to be some money paid back or something, but it is an audit that is done with very serious potential consequences if there’s been shady things going on.”

Barber said he said he does not believe trust is broken to the degree Ascol says.

“I want to affirm the idea that our trustees need to be trained better than they are,” Barber said, adding that while trustees receive an orientation by the entity they serve, “I think there needs to be independent instruction about baseline standards of what’s best to do as a trustee in order to hold these institutions to account.”

Pointing to increased giving to the Cooperative Program, the Lottie Moon Christmas Offering, and Annie Armstrong Easter Offering, he said, “I really don’t know how much trust has been broken.”

Barber said the ultimate power to call for accountability is in the hands of the messengers.

Hadaway agreed that an entity’s trustees are the primary source of accountability, saying “you can trust what they do.”

“Most, if not all of the entities” have an annual audit of their finances, he said.

Based on his work at Midwestern Seminary, Hadaway said the most expensive audit an organization can have is a forensic audit. He doesn’t believe they are needed by any of the entities.

“I will respectfully disagree with Bro. Tom,” Hadaway said. “I don’t think we need that [a forensic audit]. When there is an egregious case that comes out … I think that can be handled by letters to the trustees.”

Candidates were given time to make opening and closing statements. They were asked about work of the Sexual Abuse Task Force and how churches can cooperate together.

The candidates were not asked about their views of women in leadership positions in the local church or in the SBC. ν