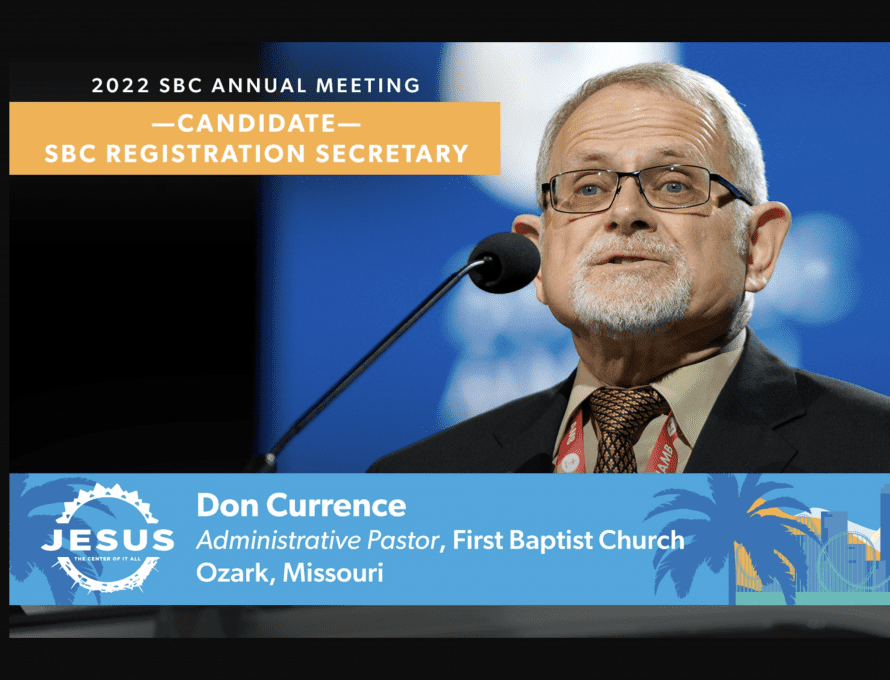 NASHVILLE (BP) – Don Currence, administrative pastor at First Baptist Church in Ozark, Mo., will be nominated for a one-year term as Southern Baptist Convention registration secretary during the SBC’s June 14-15 annual meeting in Anaheim, Amy Whitfield has announced. Whitfield is the executive director of communications at The Summit Church in Durham, N.C.

“It is my honor to nominate Don Currence for registration secretary at the 2022 SBC Annual Meeting,” Whitfield said in a Monday (May 9) announcement. “I have watched him fulfill this role over the last several years and have tremendous respect for his humility and tireless work ethic.”

“Don’s intense preparation and commitment to integrity ensures a smooth process that Southern Baptists can trust. He always puts the messengers first and leads his team of volunteers to do the same. He serves cheerfully and makes everyone he encounters feel at ease.”

In 2021, First Baptist Ozark gave 7 percent of its undesignated receipts through the Cooperative Program, according to information provided by the Missouri Baptist Convention. The church’s giving was confirmed by data from the SBC’s Annual Church Profile (ACP) database.

“Don is one of the most selfless people I have ever met,” Whitfield said. “He does his work with joy and is an example to all who participate in the annual meeting.”

Currence has served as a trustee for New Orleans Baptist Theological Seminary (NOBTS) as well as in numerous state and local Baptist association leadership roles in both Missouri and Louisiana.

He received a bachelor’s degree from Southwest Baptist University in Bolivar, Mo., and a master’s from the NOBTS in 1981.

He and his wife Cheta have two daughters, Hannah and Leah.