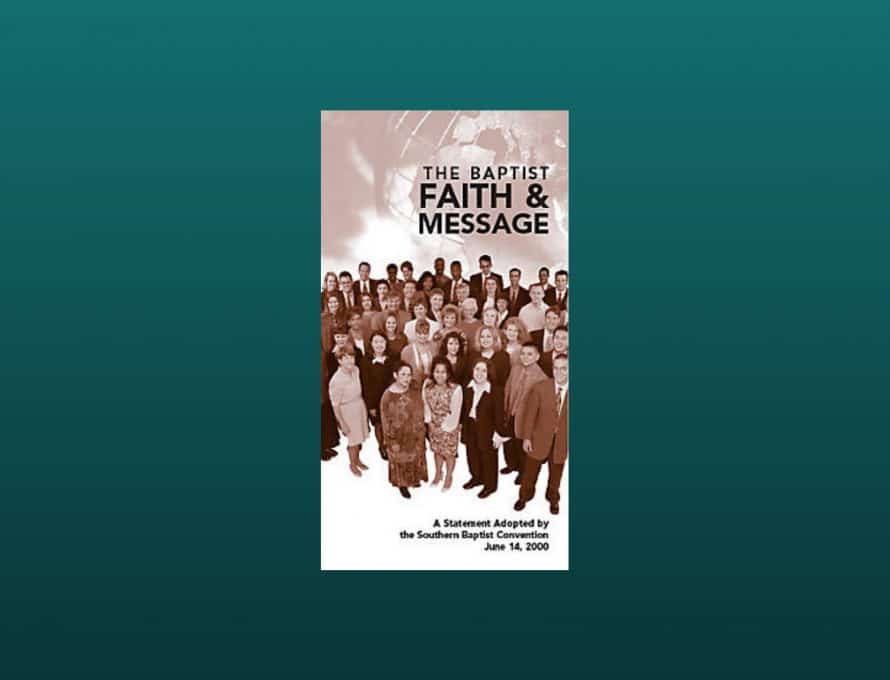 During the 2021 MBC Annual Meeting in Branson, messengers affirmed a resolution encouraging all Missouri Baptist pastors “to consistently provide instruction to their congregations on the content of the Baptist Faith and Message 2000.”

The resolution cited general unfamiliarity with The Baptist Faith & Message (BF&M). It also said agreement on the gospel and the core doctrines of our faith are essential for unity and effective Great Commission work. Finally, it noted that the BF&M 2000 is “the accepted guiding statement of faith for the Southern Baptist Convention.”

We are releasing a series of articles and preparing a book-length resource in support of this resolution. We believe the confessional statements in the BF&M are vital, not only to Missouri Baptists, but to all Southern Baptists and to our cooperative work of obeying the Great Commission. Our goal is to help pastors and other church leaders equip their members to understand the biblical truths that unite us as Southern Baptists.

Simply put, The Baptist Faith & Message 2000 is a statement of beliefs that Southern Baptists hold in common. These beliefs are expressed in 18 articles of faith, ranging from the Scriptures (Article I) to the family (Article XVIII). Copies of the BF&M are available for viewing and downloading online at sbc.net and in booklet form from Lifeway.com.

The BF&M is best described as a confession – a statement of how we as Southern Baptists understand Scripture and all it reveals about life and godliness. We don’t consider it a creed because we don’t want to leave the impression it is somehow binding on Southern Baptists, or that it stands alongside, or above, Scripture.

As the introduction to the BF&M 2000 states, “Baptists are a people of deep beliefs and cherished doctrines. Throughout our history we have been a confessional people, adopting statements of faith as a witness to our beliefs and a pledge of our faithfulness to the doctrines revealed in Holy Scripture.”

The introduction continues: “Our confessions of faith are rooted in historical precedent, as the church in every age has been called upon to define and defend its beliefs. Each generation of Christians bears the responsibility of guarding the treasury of truth that has been entrusted to us [2 Timothy 1:14] …”

Southern Baptists introduced the BF&M in 1925 in response to a growing trend of anti-supernaturalism, as well as the fundamentalist/modernist controversy that began in the Northern Presbyterian Church and spread to other denominations. The statement was a revised edition of the New Hampshire Confession of Faith, which Baptists nationwide commonly employed.

In 1963, Southern Baptists replied to attacks on the authority and truthfulness of Scripture by adopting revisions to the BF&M. In 1969, Southern Baptists adopted a motion encouraging the agencies, boards, and institutions of the convention to use the BF&M as a guideline in employment, editorial content, and policy.

In 1998, the convention added an article on the family, thus answering cultural confusion with the clear teachings of God’s Word.

In 1999, the SBC president appointed a blue-ribbon task force to review the 1963 BF&M. Adrian Rogers served as chairman. The task force embraced the 1925 and 1963 editions, and recommended some revisions, resulting in the BF&M 2000.

It may prove helpful to note the following observations, drawn from the 1925 report to the Southern Baptist Convention:

1. The doctrinal statements in the BF&M constitute a consensus of opinion among Southern Baptists for the general instruction and guidance of our people. They are not intended to add anything to the simple conditions of salvation revealed in the New Testament.

2. The BF&M is not a complete statement of our faith. It does not claim finality or infallibility.

3. Any other groups of Baptists, large or small, have the inherent right to draw up statements of faith for themselves and publish them to the world.

4. The BF&M does not in any way challenge the sole authority of Scripture for faith and practice among Baptists. Confessions like the BF&M are only guides in interpretation, having no authority over the conscience.

5. Statements in the BF&M communicate certain religious convictions, drawn from Scripture. They are not to be used to hamper freedom of thought or investigation in other realms of life.

The introduction to the 1963 edition of the BF&M states: “Baptists emphasize the soul’s competency before God, freedom in religion, and the priesthood of the believer. However, this emphasis should not be interpreted to mean that there is an absence of certain definite doctrines that Baptists believe, cherish, and with which they have been and are now closely identified.”

Baptist churches, associations, state conventions, and other networks have adopted similar statements of faith as a witness to the world and as instruments of doctrinal accountability.

As the BF&M 2000 committee expressed, “We are not embarrassed to state before the world that these are doctrines we hold precious and as essential to the Baptist tradition of faith and practice.”

Next: Article I: The Scriptures