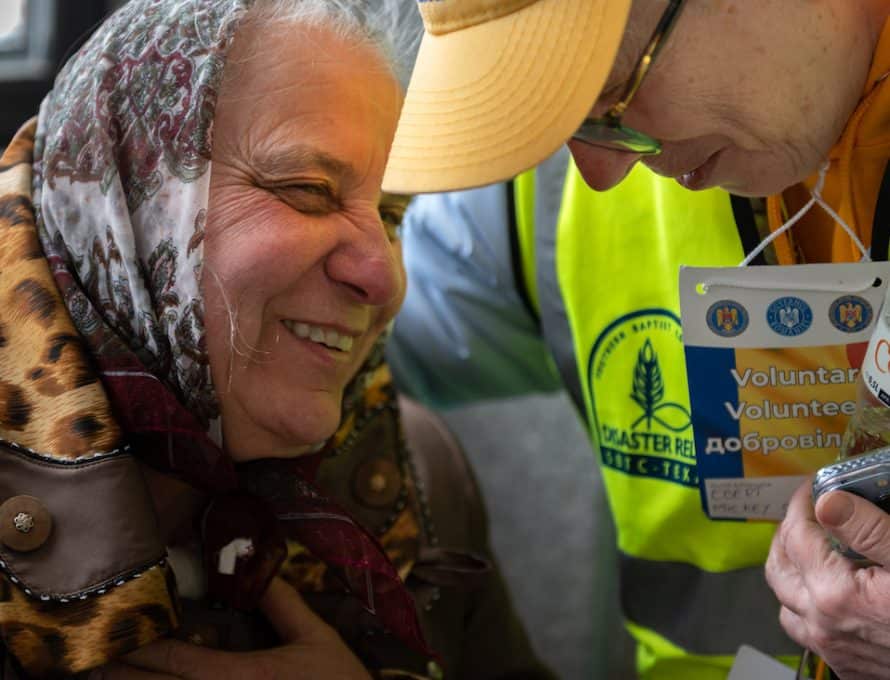 SUCEAVA, Romania – Mickey Ebert leans in to pray for a Ukrainian woman. Ebert always asks if she can pray for those she interacts with. Ebert is the leader of a team of Southern Baptist Disaster Relief volunteers who represent the Baptist state conventions of Missouri, California and the Southern Baptists of Texas Convention. (IMB photo)

SUCEAVA, Romania (SEND Relief International) – “You are safe.” These were the words a Ukrainian woman, her daughter and an elderly woman needed to hear while waiting for their train. “Breathe in. Breathe out.”

Mickey Ebert first spoke these words to a woman and her daughter at a train station in Suceava, Romania. The mother tried to put on a brave face as she walked into the station. Ebert welcomed her and handed her a piece of paper with a QR code on it that read, “Hope for Ukraine.” When the mother turned to sit down, tears filled her eyes.

Ebert is the leader of a team of Southern Baptist Disaster Relief (SBDR) volunteers who represent the Southern Baptists from Missouri, California and Texas. She’s a member of Blue Springs Baptist Church in Independence, Mo. 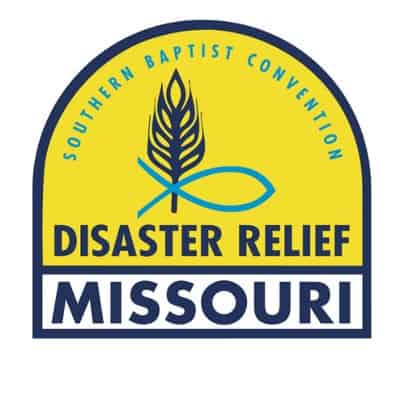 “Were you scared?” Ebert asked the daughter tenderly. She nodded, and Ebert later said it was evident the daughter, age 10, was also striving to be strong for her mother.

“You are brave. You are full of courage. You are here in a safe place,” Ebert said.

Ebert’s voice is soft and gentle, with the tenor of someone who often works with children–at age 71, she has 40 years of teaching experience. In addition to teaching, Ebert also worked for the National Archives and was a chaplain for a disaster relief chainsaw team. Ebert got her start in SBDR in 2017 during Hurricane Harvey in Houston, Texas.

“Let them take care of you; they are safe,” Ebert told the girl and her mother, gesturing to the help station in the center of the waiting hall.

Ebert and her team are one of 12 Southern Baptist volunteer teams that have traveled from the United States to Eastern Europe to serve Ukrainian refugees. To date, more than $8 million has been donated to Send Relief and the International Mission Board (IMB) to go toward Ukrainian relief efforts. 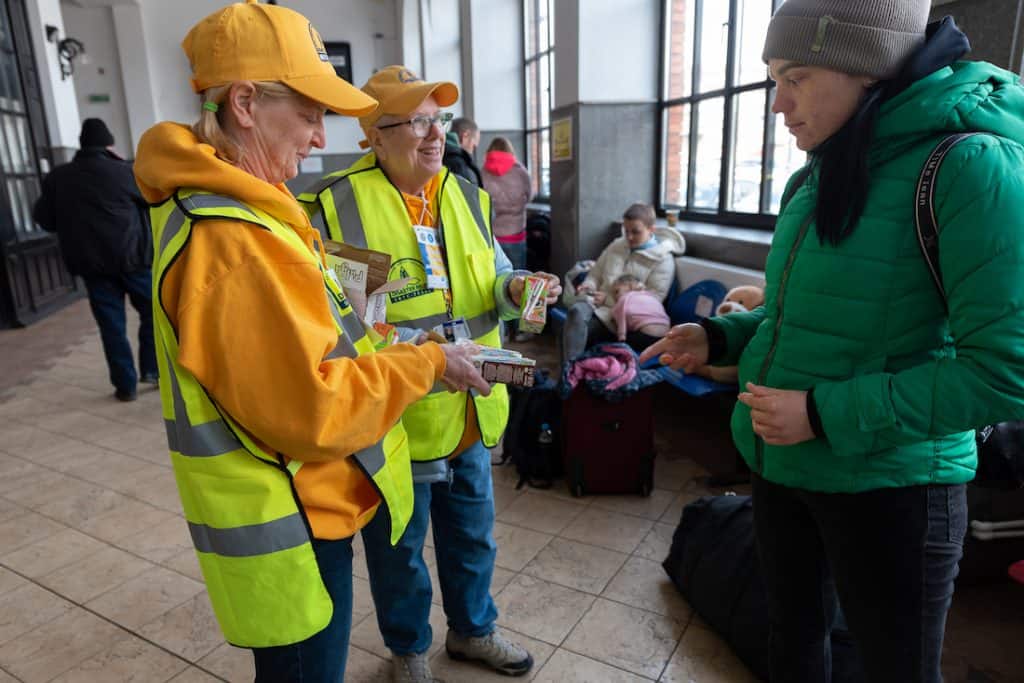 SUCEAVA, Romania – Diana Scoggin, left, and Mickey Ebert, hand chocolate milk and juice boxes to a Ukrainian mother in a train station in Suceava, Romania. Scoggin and Ebert arrived as part of a Southern Baptist Disaster Relief (SBDR) team and are SBDR volunteers with the Missouri Baptist Convention. (IMB photo)

Romanian volunteers are at the station around the clock. Train tickets are free for Ukrainians.

One volunteer, Klara, said at the beginning of the crisis, she worked 20-hour shifts as the fire station’s red buses ferried weary Ukrainian refugees from the border of Romania and Ukraine. Most of the volunteers went to the border, Klara said. Not many thought to come and assist Ukrainians who were boarding trains to take them to cities across Europe.

Donning their yellow hats, vests and volunteer badges, Ebert, and her SBDR teammates Diana Scoggin from First Baptist Camdenton, Mo., and Terry James from King’s Trail Cowboy Church in Whitewright, Texas, visited the train station with Marcela, a Romanian Baptist, to pass out juice boxes and pray for refugees waiting for trains.

For 18 years, Ebert taught fifth grade. After learning that the girl was 10 years old and that she was in fifth grade, Ebert shared how she treasured those years teaching fifth graders.

“Leaving, at 10 years old, you may have had to leave your pet. At 10 years old, all your safety is with your school, your home, your parents,” said Ebert. “If she has a father, he’s there fighting. There’s no adventure. There’s just grief and sadness and that feeling of leaving all that you knew.”

Ebert asked the mother and daughter if she could pray for them.  Before leaving, Ebert told the 10-year-old she was beautiful.

“No, you are beautiful,” the girl told her.

Ebert noticed an older refugee woman sitting a few seats down from the mother and daughter. She sniffled and wiped away tears.

The night before, four rockets landed near this woman’s home. One of them exploded, but she didn’t know what happened to those who were near the blast. She was worried about the people who remain in her town.

Though there are no alarms or bombs on this side of the border in Suceava, she said she still hears ringing in her ears. The sirens are not abating in her memory.

“Tell her she is safe now,” Ebert told a translator.

“She even prays for the Russians to be healthy because you have to pray even for the enemy,” Klara translated. “It doesn’t matter. No one should die.”

Jesus said you should love your enemy, the woman explained, and she was raised to believe that.

Ebert then asked to pray for her.

“Earlier we prayed for health; now we pray for peace,” the woman said.

Ebert and the older woman bowed their heads. Ebert voiced a prayer asking for peace for the woman and for a silencing of the sirens in the woman’s mind.