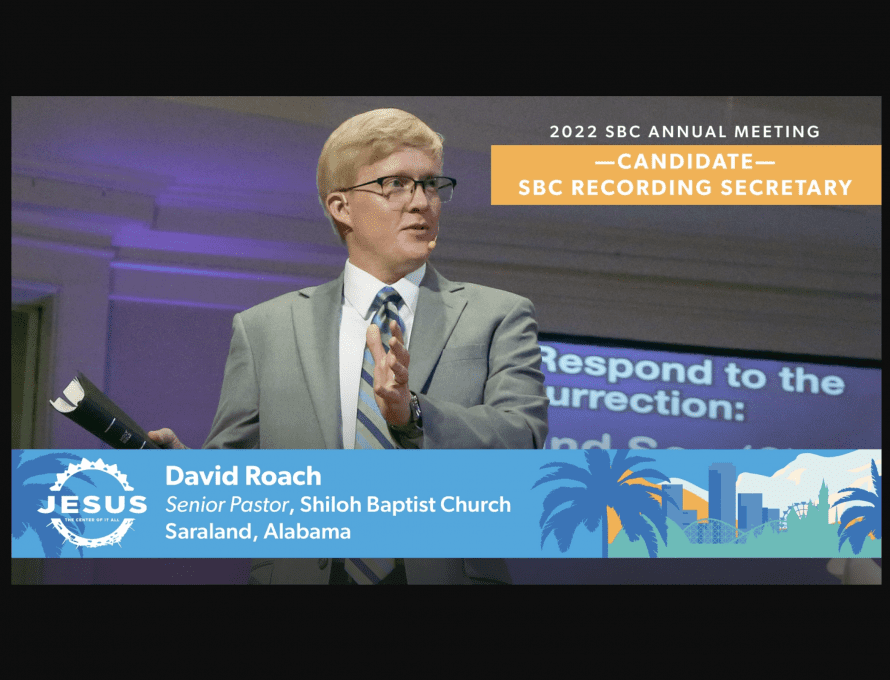 Mark Snowden, director of missional leadership for the Cincinnati Area Baptist Association in Ohio, announced his intention to nominate Roach in an April 25 statement.

From 1999-2002 Roach was an intern for SBC Convention Relations before contributing to Baptist Press from 2003 to the present, save for 2014-2019, when he was BP’s chief national correspondent.

“The recording secretary is charged with recording SBC business, budgets and legal matters with technical accuracy and precision,” said Snowden. “David Roach has a track record of doing that. He has written more than 1,200 Baptist Press articles, including the SBC Annual Meeting Blog, a detailed, on-the-fly record of the proceedings. He has authored hundreds more articles on the SBC for Baptist state papers and Christianity Today.

“He has the expertise to lead us into a new era of chronicling SBC proceedings, which could include new challenges like remote Annual Meeting sites and recording the results of electronic voting.”

According to Annual Church Profile reports, Shiloh Baptist Church reported 11 baptisms and averaged 179 in worship during 2021 while giving $28,371, or 5.1 percent, of undesignated receipts through the Cooperative Program.

The congregation reports 2022 missions giving totaling 10.7 percent of undesignated receipts, including 6.3 percent through CP and support of two local church plants – one predominantly African American and one Spanish-speaking that meets in Shiloh’s facility.

In Kentucky, Roach served as pastor of Emmanuel Baptist Church in Shelbyville for seven years and on the Kentucky Baptist Convention Mission Board and Committee on Nominations. He also was part of the Shelby Baptist Association.

“I’ve been captivated by the business of our convention since attending my first SBC Annual Meeting at age 15 in 1995, when we adopted the Resolution on Racial Reconciliation,” Roach said. “God has called me to record convention proceedings for the past 20 years. It would make sense to continue that work as recording secretary.”

Roach is the third candidate expected to be nominated at the annual meeting, joining Georgia pastor Javier Chavez and North Greenville University Provost Nathan Finn. Missouri Baptist Convention Executive Director John Yeats, who had held the position since 1997, announced earlier this year he would not seek the office.

Roach’s wife, Erin, has 20 years of experience as a Baptist journalist, including three as BP assistant editor. They have three children.

He holds both an M.Div. and Ph.D. from Southern Seminary and a bachelor’s degree in philosophy from Vanderbilt University. His doctoral dissertation was adapted into the 2021 book The Southern Baptist Convention and Civil Rights, 1954-1995.