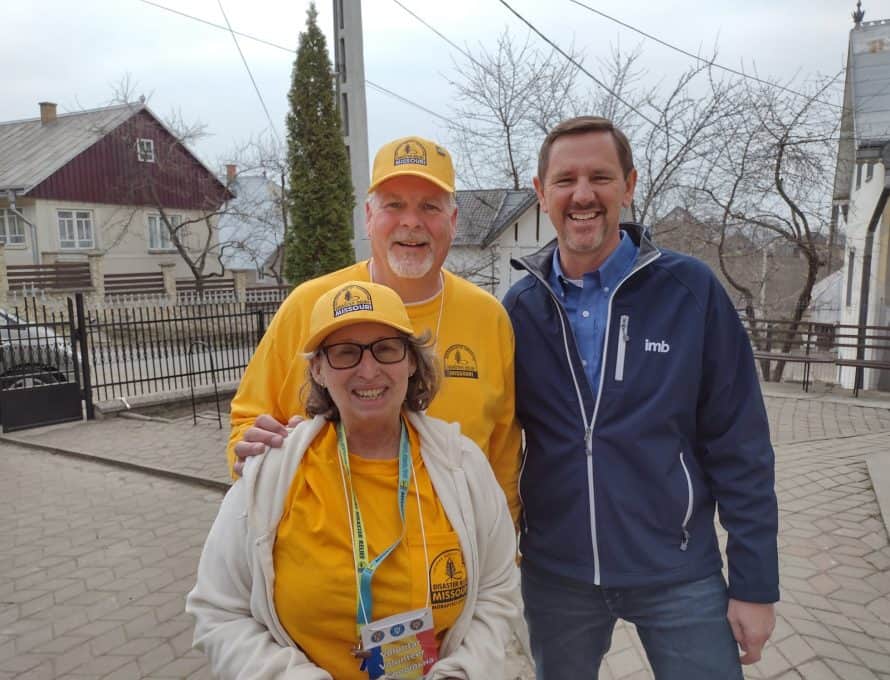 ROMANIA – Don and Diane Combs (left) meet with International Mission Board President Paul Chitwood while working as Missouri Disaster Relief volunteers, helping Ukrainian refugees who fled into Romania after the outbreak of war in Ukraine. (Photos courtesy of Don and Diane Combs)

Don is a retired pastor and member of the Missouri Baptist Convention executive board. The Combs, attend Anthem Church in Columbia.

In an e-mail exchange, March 23, they said they are in a town about 30 minutes south of the Romania-Ukraine border. They reported wrapping up their first day of ministry there. Combs said there are multiple aid organizations working alongside Send Relief.

The senior pastor of the association of Baptist Churches in Northern Romania was helping the group on that first day of ministry. He is helping the group have a tent or storage container to work out of along the road coming from the border crossing.

He said the process at the Ukraine border is that they walk or drive a car through the border crossing. Once on the Romanian side, refugees are greeted by Romanian officials who walk with them into the refugee area.  There many aid workers gather around them offering assistance.

Combs said some of the refugees accept the aid being offered, and others keep on moving. The aid workers are offering food, water, diapers, toys, phone charging stations and literature for the refugees. There are some tents set up where people can stop and rest for a while before moving on into the nation of Romania.

A Baptist church in a town about five minutes from the border crossing has set up a temporary shelter in the basement of their building.  They are offering food and water.  Most of the refugees only stay a couple of days, Combs reported.

Other local Romanian pastors are telling the aid workers they expect there will be additional waves of people moving into the country.  Most who have arrived seem to have resources and the physical abilities to quickly move out of Ukraine.  But they expect a second and third wave of refugees coming who have less financial and physical resources and may be more limited in mobility.

The Combs, along with four other individuals from Texas and California, are being driven around by a local pastor from the city of Bucharest.  He serves two Baptist churches every week and ministers with a group serving over a thousand orphans (teens and children) as well.

There are some heartbreaking stories being recounted to the volunteers.  Here are two that Combs mentioned.

“I spoke with a young father from Myropol, Ukraine, a heavily attacked area, who along with his wife and another couple and three children made the long drive to the border.  It took them longer than a week to make the drive through hard situations. The men are both Gideons and we had solid conversations about their faith and Gideon ministry.  They made the drive in a Russian Lada, which is a very small car and they know that God brought them out to safety.”

He also said, “I visited with another family from outside of Kiev in the suburb of Irpin, Ukraine, where major battles were going on. Russian and Chechnian troops kept the place under fire for over two weeks.  Then a ‘green corridor’ was made available for people to leave safely.  They had to leave everything behind (apartment, car, relatives) and walk out of the area and much of the way across Ukraine until a ride finally helped them get to the border.  They plan to go to Spain with others who have done the same already.”

To support this effort to provide “help, hope and healing” to these Ukraine refugees in Romania, MODR officials have provided an opportunity for giving to the effort.  Send checks to Missouri Baptist Convention, attention Disaster Relief, 400 E. High St., Jefferson City, MO 65101.  Mark checks for Ukraine Relief.  Or online contributions may be made at: https://mbcpathway.com/ukraine/.