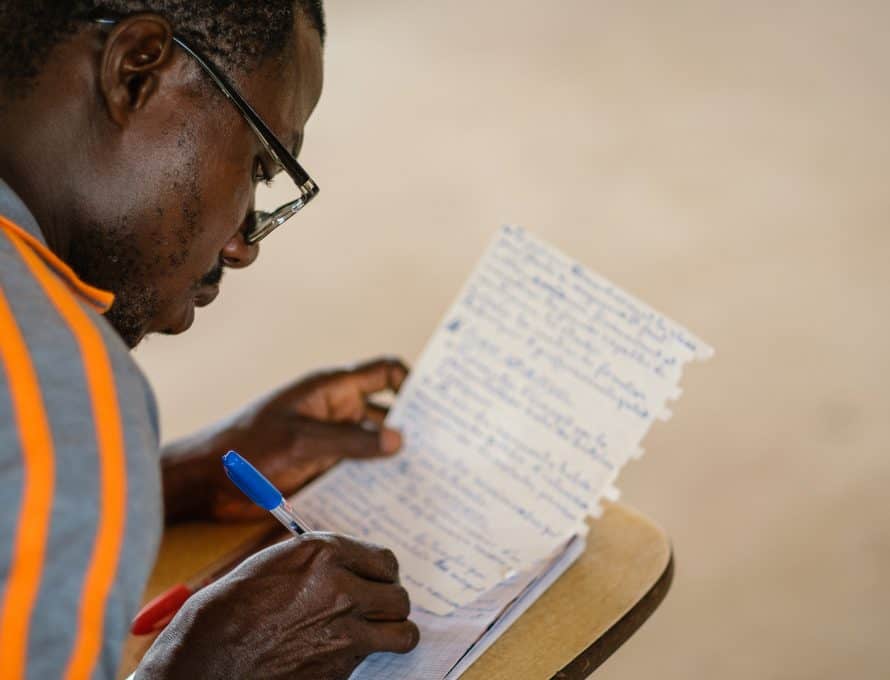 Alafia Mazabalo, a Togolese missionary to Kotokoli/Tem, takes notes during a missions training event. The program was a partnership between the Togo Baptist Convention and the IMB. The new home missionaries have been appointed to work with unreached people groups in Togo and Benin, several of which are a part of the IMB’s SSAP “55 in 5” initiative which aims to reach 55 unreached African people groups in five years. (IMB Photo)

TOGO, Africa – Tagba is a pastor who works as a national missionary in Togo. He was trained by the Togo Baptist Convention, in partnership with missionaries from the International Mission Board, to reach unreached people groups in Togo and Benin.

Prepared to tell Bible stories verbally, called the orality method, he entered a mosque in the city where he serves and started talking with the imam, the Muslim religious leader.

The imam was so touched, he called his wives to come hear the stories as well. After the family asked the national missionary question upon question, the missionary began to leave. But the imam followed him.

“You know good stories like that? What have you waited for to come share these stories with us? Now the Muslims are winning! What are we going to do?” the imam asked Tagba.

These questions really turned this missionary upside down. He began to understand that even though these Muslims are in the mosque, they’re still thirsty for something more than what they are getting. 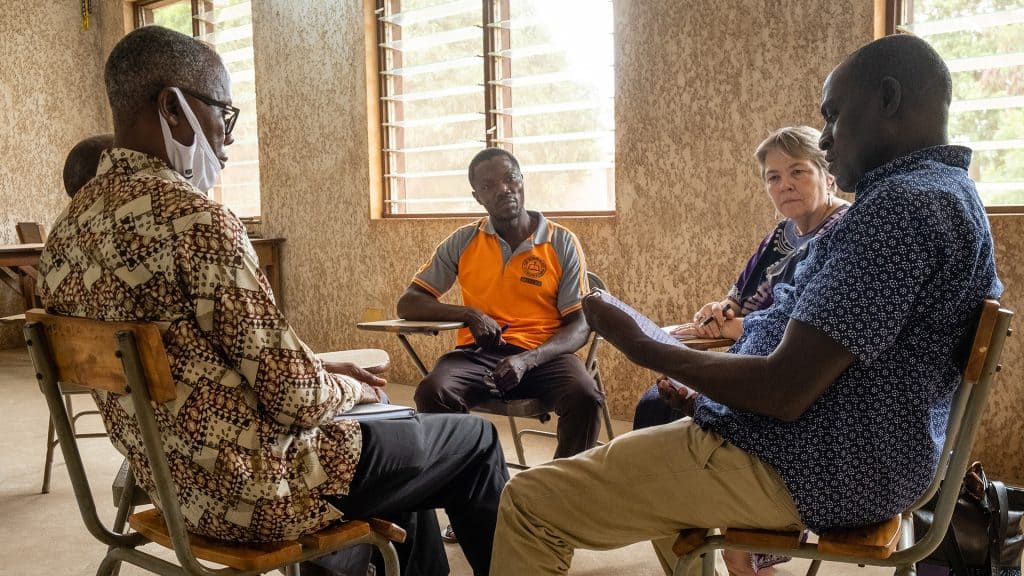 Togolese trainers Rev. Kwashie Amenudzie (front left), Rev. Essodinia Ayewa (front right) and IMB missionary Katee Sheppard (rear right) consult with Alafia Mazabalo, a Togolese missionary to Kotokoli/Tem, about his missions action plan. The missions training event was a partnership between the Togo Baptist Convention and the International Mission Board. The new home missionaries have been appointed to work with unreached people groups in Togo and Benin, several of which are a part of the IMB’s SSAP “55 in 5” initiative which aims to reach 55 unreached African people groups in five years. (IMB Photo)

Tagba is continuing to share the gospel with this imam through Bible storying.

Lucien is another national missionary who works among Fulani people in Benin.

Lucien enters villages and builds relationships with the chiefs and elders. This allows him to go into the villages unobstructed. He tells the Bible stories freely and plants churches in this manner.

The way Lucien engages with a village is now being used to encourage other African believers to do the same.

During this training, national Togolese and Beninese believers are equipped to go to their own people as missionaries in a highly Muslim context. These “home missionaries” are specifically trained to reach unreached people groups. Two of these people groups, the Kotokoli and Borgu Fufulde, are part of the Sub-Saharan Africa affinity’s 2020 “55 in 5” initiative. Thus far, 27 nationals are continuing to be trained and are now mobilized to reach their own people.

During the training, a national missionary shares how to use Bible storying to share the Bible in a culture that values stories and oral learning. Another teaches new missionaries about missionary life. Another national trainer comes and teaches the missionaries how to be accepted while living among these unreached people groups.

The Beninise and Togolese missionaries come together for a week at a time, once per quarter. They learn a story a day during a five-day training and return to their fields to tell these stories. They meet nine times total over a span of approximately two years.

“The national trainers are continuing to train other people and are seeing the fruit of their work – a lot of work!”  said IMB missionary Katee Sheppard. “There’s pride in seeing God’s Word advance but there’s also pride that the nationals are doing it.” Sheppard is excited that the orality training is one of the tools that is equipping national believers.

And it’s important for these national believers to be trained, Sheppard explained.

“The reality is that there are a lot of places, for security reasons we (IMB missionaries) can no longer go. There are a lot of places where we have a foundation of Baptist believers there that we can work with,” she said. “God has given us so many resources on the ground, and we’d be crazy to overlook that.”

These national believers are already in the country, they speak the same language, they wear the same clothes, and they eat the same foods as the people they are trying to reach.

“All we have to do is help them to understand methods and ways that they can reach their people. And that’s what it’s all about because we can’t do it alone. The world is too big; the lost are too many. But by using the people that God’s already brought to the field, we can get it done,” Sheppard said.

Kwashie, a pastor and missionary in Lomé who is a leader in the training, agrees with Sheppard and said he “really appreciates the people on the field who are willing to put the nationals on the same level and see them as partners and to work together.”

“The IMB cannot do the work alone – we need one another,” Kwashie continued. “We need you and you need us for the kingdom work to go forward. We are partners. We have to be one to do this work.”

Pray that other national bodies of believers catch the vision of these missionaries to reach their own people.

Pray for the national missionaries as they engage in the IMB’s vision to reach 55 unengaged, unreached people groups with the gospel by the year 2025.

Contributing writers of this article: Max Power is a multimedia project specialist for the IMB serving in West Africa. Myriah Snyder is senior writer/editor for the IMB.