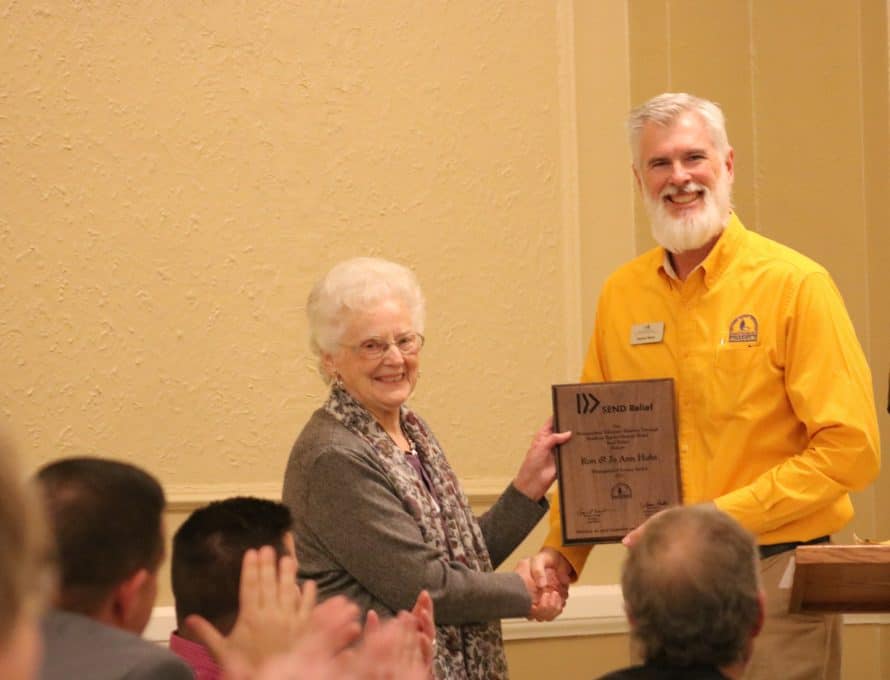 The Hahs are the MODR Mass Care (feeding unit) coordinators, a role they have served in for 7 years. They have been involved in disaster relief ministry since 2001 and have been called out to lead feeding efforts in numerous DR callouts in Missouri and around the nation.

Their first deployment was in 2003 when they went to southwest Missouri and set up a mass care feeding operation in Linn Creek, near Camdenton.

Jo Ann said they had good mentors, Dick and Rita Piergo from Williamsburg, who “helped us learn the ropes.”  Within a few years Ron was asked to be a “blue hat” supervisor of a team from his association, the Cape Girardeau Baptist Association.

They found themselves being called out for hurricane relief responses in Virginia and Florida in the coming year. “Every September,” recalls Ron.

But the event that most all disasters are measured by was Hurricane Katrina which struck the Gulf Coast of Louisiana and Mississippi in 2005.  The Hahs were there for multiple weeks during Hurricane Katrina and Rita responses.  They led the Missouri mass care feeding unit response to the New Orleans area of St. Charles Parrish.

Jo Ann said, “If you are a feeding unit volunteer your job is behind the scenes.  Sometimes there is not a lot of contact with disaster survivors.  But even though you are behind the scenes there is a feeling of satisfaction because you are giving them a warm meal.  They need something more than a peanut butter sandwich—something that satisfies your inner cravings.”

Their job in St. Charles Parrish, La., was to provide meals which were distributed by the American Red Cross. Chaplains are sometimes able to go with those deliveries but the feeding unit volunteer’s contact with survivors was limited. She said they would always go look around the community before they went back home.

“We’ve met the most wonderful people, volunteers from all over Missouri,” Jo Ann said.  “They are like new family members to us,” she added.

Ron is retired from a career in construction, mostly carpentry and millwright work.  Jo Ann is a retired elementary school teacher.  She said when they first trained she knew she didn’t want to do chain saw work and she was tired of childcare, having just retired from the school.  She said, “I didn’t really like to cook, but I did like to eat so someone has to cook!”

They are described as joyful volunteers by their peers and leaders among the Missouri Baptist Convention disaster relief ministry.

They grew up in the same area of Southeast Missouri and were high school sweethearts.  Both say they really enjoy the DR volunteer ministry and they hope many others will be trained and volunteer.

Gaylon Moss arranged to present the award to the couple at a morning worship service at their church, First Baptist Church of Oak Grove.

He said, “We want to celebrate volunteers like the Hahs who adjust and adapt to new situations in times like these.”

In announcing the award, Moss said, “The Distinguished Service Award is like an All-Star award for a specific performance. I nominated the Hahs for this national award because of the feeding operation in Louisiana where they led their team to prepare and serve 14,800 people in a 12-day period (without assistance from a national partner). In addition, we recorded 2 salvations during the Hurricane Ida response in Louisiana. We celebrate your exemplary service.”