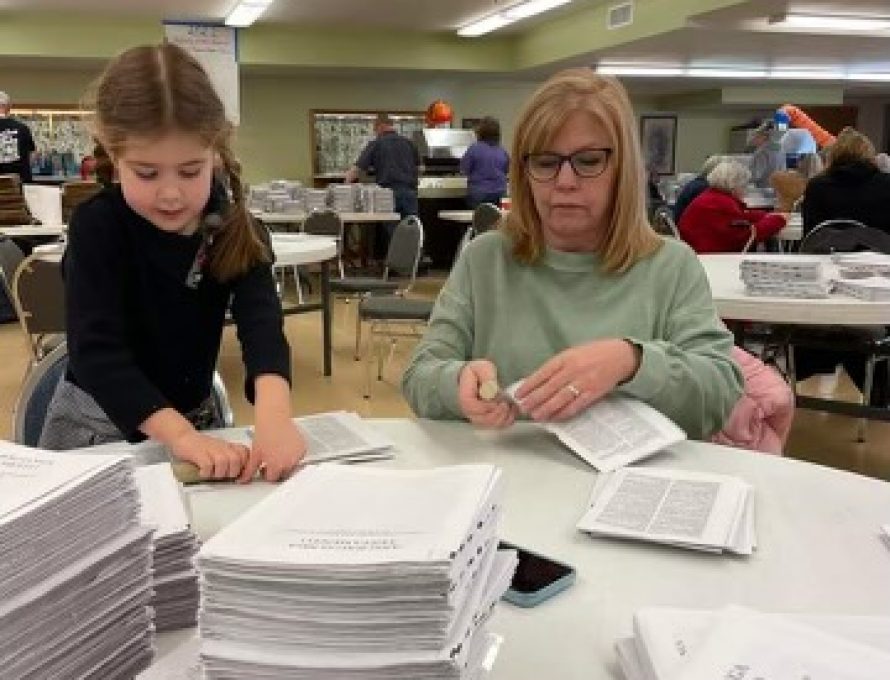 KANSAS CITY – From left, Abigail Ogle and Nancy Gatapia roll air out of Bible pages in preparation for the pages to be bound. (Photo courtesy of Country Meadows Baptist, Kansas City)

KANSAS CITY – Scripture is building heart connections and relationships between Kansas City and the Philippines. The first of two Bible building conferences was held at Country Meadows Baptist Church here.

“We started the ministry by hand carrying about 300 Bibles to the Philippines,” Bill Barker, member of First Bible Baptist of Blue Springs, said. “When we learned the need for scripture especially in three of the 86 dialects spoken in the Philippines, we knew we must be involved.”

The Bibles are printed at Mount Pisgah Baptist Church in Oliver Springs, Tennessee. The loose manuscripts then travel to Kansas City for completion. The people attending the conferences put together 6,000 to 8,000 Bibles in the Ilonggo, Tagolog, or Cebuano languages.

“Gwinda Fors and her husband, Eric, ministered for many years with the Ilonggo people,” Barker said. “She shared the great need for scripture with me. I know that $50 a week is the average salary in the Philippines with farmers earning even less. So, they can’t afford to purchase Bibles.”

In addition to the scripture, these Bibles include valuable information. “In the back,” Barker said, “we include the plan of salvation, information on baptism and the Lord’s Supper. We include other discipleship information so that a new believer can take it along to share with another. We do not want them to be saved and say, ‘Now what?’  We want them to grow in grace.”

One of the key pastor leaders in the Philippines is Sandy Dionio. “We hear so many great stories about the impact of these Bibles,” Barker said. “I love to hear of souls being saved. Pastor Sandy took Bibles into a prison and fifty prisoners accepted Christ. They received freedom in Christ.”

Barker, known by many in Kansas City as “Bible Bill,” said the ministry was able to get two new cutters and two new binders for their work this year. “We usually have 30-40 people attending our conference,” he said. “There is a constant flow of people coming to collate, roll, check, finish borders and cut the manuscripts to go into the binder. Then, we pack the Bibles in Blessing boxes to ship out.”

In addition to the Country Meadows conference, another one will be held in Richmond, Missouri. “We have many joining this conference from many different churches,” Barker said. “It excites me to see God working through so many gospel believing churches. We hope to do another 8,000 there with a goal of sending out 30,000 soon.”

In addition to the new equipment to put the Bibles together in Kansas City, the ministry also purchased two horses in the Philippines to take the Bibles up the mountains to reach more people.

“We know the power of the scripture,” Barker said. “Many of the truck drivers delivering the Bibles to our pastor partners are being led to the Lord.”