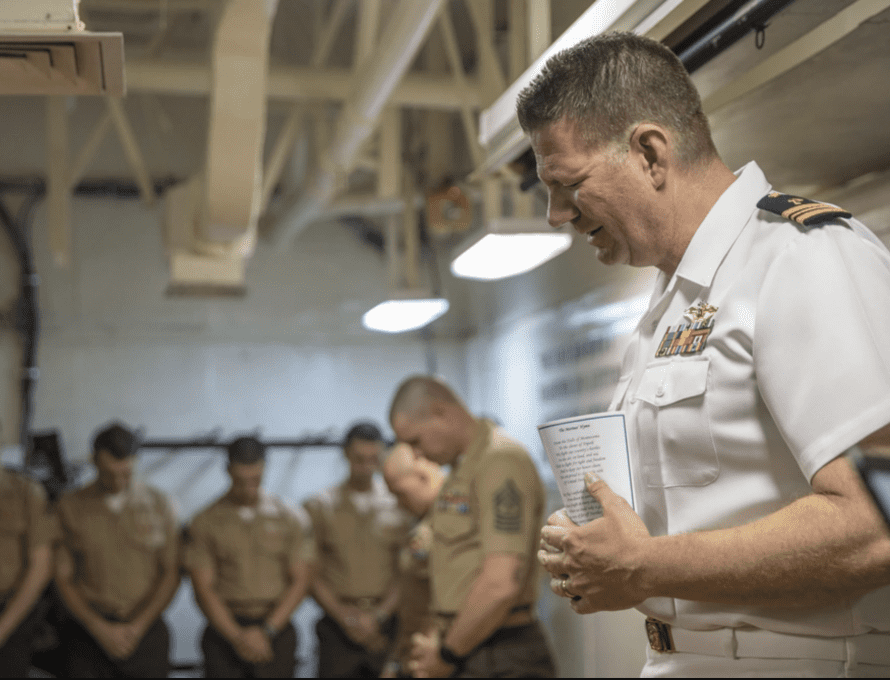 UKRAINE (BP) – A continued increase in recent weeks of Russian troops on its border with Ukraine has mirrored the escalation of tensions in the area. In such times when the world’s geopolitical temperature rises, military chaplains begin making mental, spiritual and strategic preparations in case of conflict.

“When chaplains put on the uniform, they must always consider the sober reality, like all military members, that their lives could quickly transition to a wartime footing,” said Doug Carver, executive director of chaplaincy and a retired chaplain major general in the United States Army. “For those in uniform, life can change in an instant, without any warning, and chaplains need to be prepared as well for any military contingency.”

Carver was deployed in Germany in 2001 during the 9/11 terrorist attacks, and his unit immediately shifted to a war footing after the United States and the world were caught by surprise. By 2002, he and his troops were deploying to the Middle East.

“As the senior chaplain, one of my goals was to help our chaplains and troops to prepare themselves spiritually to go into combat, knowing that war always brings with it suffering, casualties and death,” Carver said.

Tim Springer was serving as a missionary in Russia on the eastern side of the nation in 2001 when a U.S. Navy ship visited a nearby port. Springer had the opportunity to meet the ship’s chaplain. Soon after, God began stirring a calling in his heart to serve members of the United States’ Armed Services.

Now, Springer is a Southern Baptist chaplain in the U.S. Navy who is currently stationed in California.

“The situation in Russia weighs on my heart, and I pray for the people there,” he said. “Having served as a missionary and alongside Ukrainians, I know people who are still there.”

Chaplains play a key role in coming alongside soldiers to help them prepare for the severity of what they might experience and how that will affect them mentally, emotionally and especially spiritually given the lethal nature of modern warfare and the potential for mass causalities.

“I’ve deployed multiple times, and it never gets easier,” said Chaplain Col. Keith Croom, who retired in December following more than 31 years in the U.S. Army and National Guard. “You learn to control your emotions a little better. You recognize what you’re going through a little better. But every time you say goodbye to your family, you know you might never see them again.”

As a chaplain to United States’ Special Operations forces, Croom underwent the specialized training that Green Berets endured. Those forces enter a region before any conflict breaks out and typically remain long after other troops have withdrawn. A chaplain almost always accompanies them.

“That demonstrates how committed our military is – our chaplains, all the denominations and the individuals – are to making sure that these men and women are supported religiously,” said Croom.

The training chaplains receive centers on equipping and instructing them how best to minster to and meet the needs of soldiers during combat. To provide that “ministry of presence,” chaplains need to be as close to their troops as they can and identify the most crucial times and places where those under their care may need guidance and counsel.

They also must ensure that they have adequate religious and ministerial resources to meet the myriad religious needs of their troops in the field, including what Carver described as “chapel in a box.” Each unit has a portable chapel that can immediately be set up anywhere in a training or combat environment where chaplains can conduct religious services and provide pastoral care for service members.

“A lot of the preparation we do is the training that we do,” Springer said. “We do the training beside our sailors, our Marines. We go on the hikes and get in the pool. We’re noncombatants, so we don’t fire the weapon systems, but we still go to the range with them.”

Those opportunities afford chaplains the opportunity to build relationships and intentionally invest in their lives, learn about who they are and earn the right to talk about their religious convictions.

When danger seemed closest, Carver’s experience revealed that soldiers were more willing to talk about their deep spiritual questions and religious needs.

“Whether you are in combat or back home, a Southern Baptist military chaplain’s primary focus is on proclaiming the good news of Jesus and the hope we have in Him,” Carver said. “Our troops have a tendency, particularly in war time, to want to know about the weightier theological issues, the meat of God’s Word, not just something simple.”

One of the most