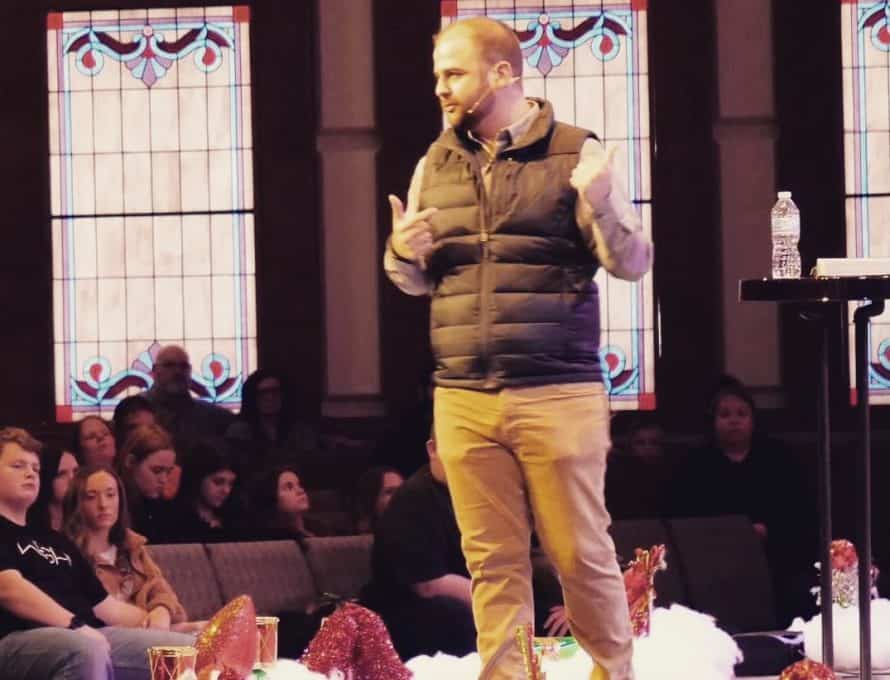 LEBANON – The middle school students at First Baptist Church, Lebanon, have a youth pastor who once served as a police detective. But he also was once an avid atheist and disputed the existence of God with anyone who would listen.

Roger Sherrer, 28, has been a minister on staff at FBC Lebanon for about a year. But he has been connected with the church and pastor Matt Taylor for more than 12 years.  When he was growing up in Lebanon, Sherrer was raised in a home with non-religious parents. He said his parents were indifferent to the church and Christianity.

In his freshman year of high school, he began reading books about atheistic philosophy.  He formed the opinion that God does not exist, and he began studying the classic arguments against God’s existence. He was involved in speech and debate in his school, and he became a forceful antagonist against anyone who tried to convince him about the reality of God’s existence.

“My identity in high school was that of a radical atheist,” Sherrer said.

In his junior year he picked up the Bible—not to become a Christian but to find ways to “pin down Christians.”  He studied the Old Testament and looked for Bible themes that seemed inconsistent, such as slavery, violence in war, and the like. “I loved to take them into Deuteronomy and Leviticus,” he said.

But he enrolled in a class in Art History and the teacher, Shelly Oursbourn, was known as a believer in Christianity. She included a section on Christian art in the course.  Sherrer decided to engage her with critical questions about faith. She declined to debate with him in class but told him afterward that she would be glad to have him engage with her pastor at their church. She would even provide pizza.

So Sherrer accepted, and he met the pastor of First Baptist, Lebanon, Matt Taylor. Over the course of a few weeks of dialogue sessions, Sherrer and Taylor became friends. They would meet for two-hour conversations and discuss the existence of God.

Sherrer said,“We have to engage atheists as if we are the last person to have the opportunity to speak to them before they pass away.”

It was another year or so when Sherrer began to slide into depression. He has battled anxiety and clinical depression for many years. During a low time, he felt he had nothing to live for, no purpose. He prepared to end his life. It was Oct. 31 – Halloween. Sherrer described his depression like this: “I felt like a stray dog with nowhere to go.”

He said he wrote a suicide note in his “Trapper Keeper” notebook. He lay down on his bed and  fell asleep. He woke up on a Sunday morning and realized what he had done (or had not done). He quietly slipped out of his house and made his way to First Baptist Church.

There he avoided contact with people and sneaked up into the balcony to sit in a corner alone. At the end of the sermon, pastor Taylor gave a clear invitation to receive Christ. He said, “If you lack meaning, value, and purpose in life, God loves you.” Sherrer said he collapsed in his chair and prayed.

He called the pastor that afternoon and told him, “I am a Christian.”  Taylor rejoiced.

So life began to get better. He enrolled in community college the next year. Later, he got employed in law enforcement, starting as a dispatcher. He went to the police academy and became a deputy sheriff, and after a few years was promoted to detective. His area of specialization was crimes involving children.

Along the way, he slipped a little and accepted the invitation of two Latter-day Saint missionaries to study the Bible with them. Before long he joined the LDS church. He prepared to go on a mission with the Mormons. After studying their theology, he began to realize it was flawed. And at some point he reconnected with Pastor Taylor.

He went back to First Baptist Church. A few years later, he began doing some preaching in the area churches in Laclede County. Director of Missions for the association there, Steven Strauch, became one of his mentors, along with Pastor Taylor.

So a year ago, Taylor asked him to leave law enforcement and join the church staff as middle school pastor. He is now serving there and is also working on a master’s degree in apologetics at Liberty University.

He now has to deal with objections to Christianity that skeptical kids throw out to him in youth group. And he has talked a lot about these objections from both sides of the debate in his lifetime.

He recently joined the Missouri Baptist Apologetics Network.  He feels he has some things to offer to Missouri Baptist churches in the areas of responding to atheism, Mormonism, as well as how to engage with people using apologetics as an evangelism tool.