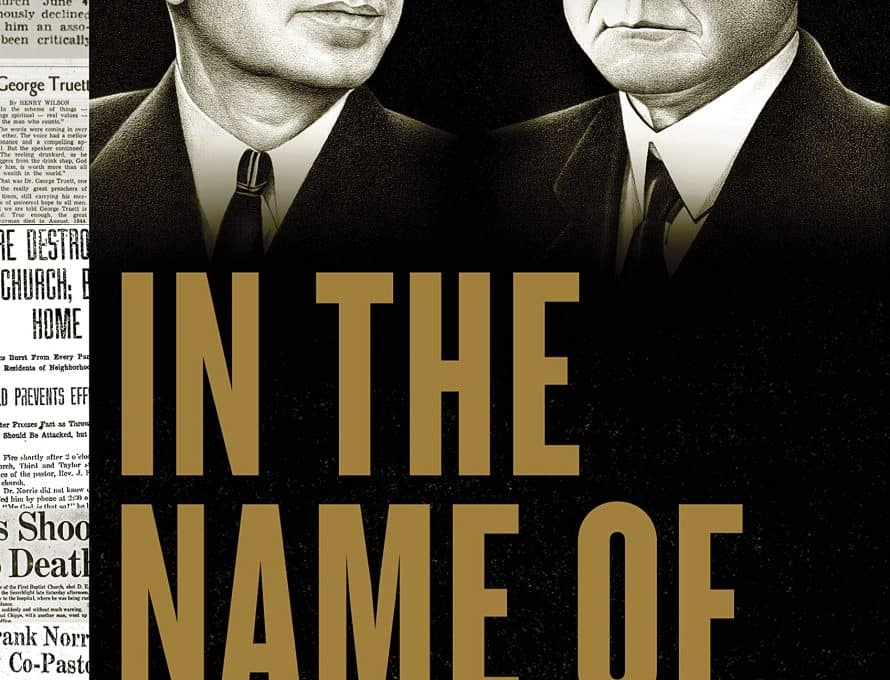 KIRKSVILLE – I saw the advertisement for O.S. Hawkins’ book, In the Name of God: The Colliding Lives, Legends and Legacies of J. Frank Norris and George W. Truett (B&H 2001), and I just knew I had to read it. On the surface it looks a little uninteresting with a picture of two stern preachers in Texas that had a quarrel with each other about a hundred years ago.

When I attended Southwestern Seminary in Ft. Worth, we were told stories about J. Frank Norris in our church history classes.  The professors had little good to say about him.  Even 50-70 years later this controversial and flamboyant preacher has left his mark on Ft. Worth, the seminary and Texas Baptists.  He had a penchant for controversy and down-and-dirty fighting in order to get his way.

I also admired the First Baptist Church of Dallas  pastored by W. A. Criswell.  At that time (in the 1970’s) it was the largest Southern Baptist Church. Truett had been pastor of that church for 47 years from around the turn of the century until 1944.  His influence on Texas Baptists and the Dallas-Ft. Worth region was large also.

The two pastors never got along well.

O.S. Hawkins, recently retired president of GuideStone Christian Resources of the Southern Baptist Convention, penned this book to contrast and compare these two men who feuded most of their ministries.  It is an interesting contribution to church history as Hawkins details the rise to influence these two preachers had and then their quarrels which really never got settled and reconciled.

Norris was the owner of the Baptist Standard newspaper while pastoring the largest church in the Southern Baptist Convention at that time. He played a lot of influence in Texas Baptist politics.  However, he fought so stridently that he began to lose favor with people and his influence began to fade.  He started a rival fundamentalist organization which became known as the World Baptist Fellowship.  Many independent Baptists have allegiance to this movement.

Truett, a consummate preacher and a leader in Texas Baptist circles, was a more sedate and quiet leader but he pushed hard (through other people) to get his way.  He never cared for  J. Frank Norris.  And that feeling was mutual with Norris.

Norris tried to expose the drift toward liberalism and the teaching of evolution at his alma mater, Baylor University in Waco.  Both Norris and Truett had attended there.  Norris was successful in bringing the wayward Baptist school’s teaching out into the public light.  Truett opposed him in this effort.

Southwestern Baptist Theological Seminary was birthed at Baylor University by B.H. Carroll.  Norris was able to persuade the seminary to move to Ft. Worth.  Later Norris would go on to stand in opposition to the seminary in many matters.

Both Norris and Truett shared a peculiar and controversial fact: they both shot a man.

Norris pulled a revolver out of his desk drawer and defended himself when an armed and angry man burst into his office reaching for his weapon.  He was exonerated in court of any wrongdoing—the courts believed his actions to be self defense.

Truett accidentally shot a man while hunting. While out on a hunting trip with the chief of police of the City of Dallas, Truett discharged his weapon and injured the police officer.  He survived the leg wound and the incident was ruled accidental.

There were many other quarrels and rivalries described by Hawkins about these two competitive preachers.  Norris the flamboyant and cunning preacher with a mean streak and the quiet, reserved Truett who worked through others from a position of power and wealth to get his way.

Both men passed away in the 1940s and they never really reconciled any of their differences.

But they had followers who carried on the torches for these men.  One man (Truett) set the course for denominational loyalty and conservative churchmanship, another (Norris) fighting the denomination from outside the circle of power until he was ostracized and had to form a new fellowship.

Hawkins traces the stream of these men’s influence up to the fairly recent “Conservative Resurgence” movement which sprang up in the 1970-80s.

I thought the book would be about two preachers in two competitive Texas cities having a fight. It was all of that for sure!  But it was fascinating, and it had some redeeming qualities as Hawkins found some good traits in each of these prominent preachers who influenced a generation or two of Baptists.  Take a look at this book. It’s hard to put it down.