Along the journey, it’s not uncommon to touch, handle or restore historical treasures. Last week, with the help of a friend, I held a family bible that I paid to have restored. When I became the guardian of this family treasure, it was in really rough shape – so much so that I didn’t recognize it as the complete New Testament. Today, it is a beautiful treasure that lists my grandmother’s birth, marriage, and untimely death in 1967.

This week, my hands held another historical treasure. As executive director, I presented to Dr. Paul Chitwood a historical artifact from the home of Ms. Lottie Moon, the famous Southern Baptist missionary to China. The artifact may not seem like much, but historic treasures have a way of connecting us to the real people of the past. 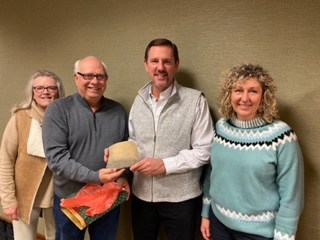 The artifact was a simple roof tile from Ms. Moon’s home/school from which she loved the Chinese people and taught their children and women the wonderful gospel realities from the word of God. Ms. Moon gave her life for the cause of the Lord Jesus Christ.

By now, you know the story of how she humbly, faithfully served, fell sick, and after much persuasion was sent home for treatment. On her journey home, she passed. Her life blazed the trail of sacrificial service for future missionaries, who are called of God to share the gospel of the Lord Jesus to the unreached peoples of the world.

She was such a legend that Southern Baptists named their largest designated mission offering in her name: the Lottie Moon Christmas Offering for International Missions. Every dollar to that offering is used internationally to spread the gospel to a lost and dying world. This year, Missouri Baptists set a goal of $4 million for this special offering that churches usually collect in December. Many churches send that offering in before December 31 to get their gift into the current year.

The roof tile came into my possession from recently retired St. Louis pastor John Hessel. He has cherished the tile for years, but downsizing gave him the idea of sharing it with a broader audience. He came by the tile when a faithful member of First Baptist Oakville, Leora Chapman, presented it to him. Mrs. Chapman obtained the tile in 2006 while visiting her daughter, Leigh, who was an IMB journeyman assigned to China.

Mrs. Chapman, a retired public-school teacher, was known for her personal integrity and quest for truth. When Mrs. Chapman passed, John Hessel officiated at her funeral. “I accepted the tile as a gift and I pass it on as authentic. Leora was a staunch champion of missions, the Lottie Moon offering and the Cooperative Program.  Needless to say, I was overwhelmed by her gift and her generosity.”

There are other historical treasures, but they are not always artifacts. Sometimes they are the result of taking our treasures and investing them into the kingdom of our Lord. December is a great time to make end-of-year giving a priority. Due to taxation rules, 2021 is one of the best years to make an end-of-year gift to your church, a faithful ministry such as our Missouri Baptist Children’s Home or Baptist Homes and Healthcare Ministries, or to one of our Missouri Baptist universities: Hannibal-LaGrange University, Missouri Baptist University, or Southwest Baptist University.

MBC has several projects, too. One is the BSU at Missouri State University. The old, moldy building has to go and a new building must be built. Also, the MBC Disaster Relief ministry is prayerfully desiring to build an ADA-compliant shower unit (the only one in the SBC DR system).

There are many places to give, and the 2021 tax incentives make your gift even more powerful—fewer taxes, more ministry needs met. The purpose of our giving is to change the lives of people and create historical treasures that perpetuate the sharing of the gospel.