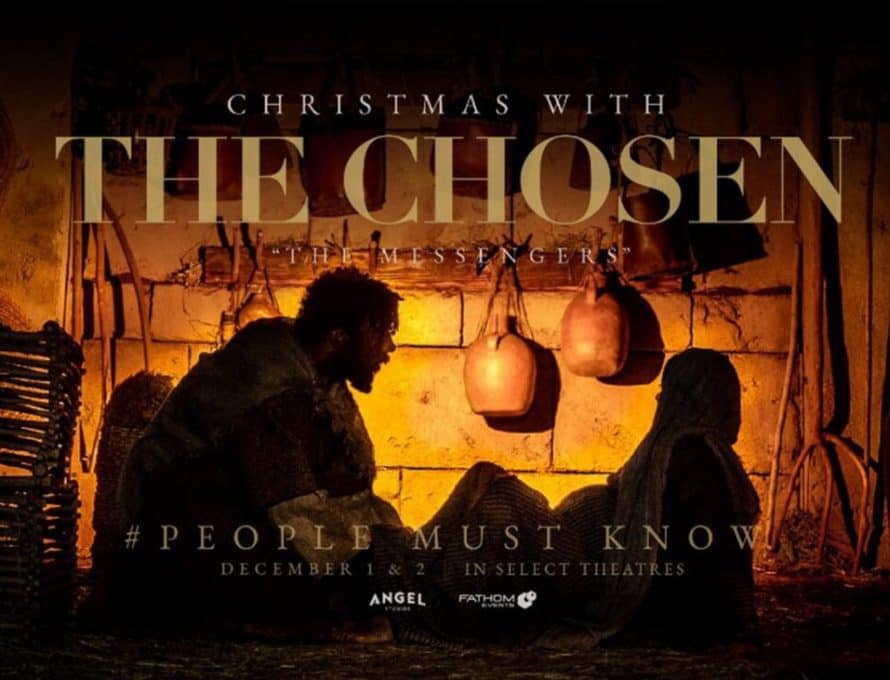 KANSAS CITY – If you’re a fan of “The Chosen,” get ready for an early Christmas present!

“Christmas with The Chosen: The Messengers” is the unwieldy title for a two-hour special that ran in theaters from Dec. 1-10, but is now available on the same free streaming platforms as the first two seasons of the show. If you’re in a hurry to know about the show, here’s the bottom line: it’s excellent. Truly excellent.

For those not in the know, “The Chosen” is an independent television show depicting the life of Christ through the eyes of His disciples. Its 17 episodes range from 35 minutes to an hour in length. Both seasons are available to stream for free through several sources, including at watch.angelstudios.com/thechosen.

I’m a huge fan of the first two seasons of “The Chosen,” and I was very excited for a feature-length episode. So when I nestled into the theater, I very disappointed when this Christmas special turned into one part concert, one part dramatic monologues on the names of God starring “Chosen” cast members, and one part episode. The monologues were fine, but the concert/music videos (featuring the likes of Phil Wickham, For King & Country, Brandon Lake, Maverick City Music, Mandisa, Cain, Matt Maher, Bryan & Katie Torwalt, Jordan Feliz, We The Kingdom, The Bonner Family, Leanna Crawford, Dawson Hollow, and One Voice Choir) were a boring slog for me. If you’re a big fan of those artists, you’ll enjoy it, but this is one occasion where you should consider yourself lucky to watch at home on your computer screen instead of the theater, so you can skip ahead to the meat of the special.

And it is indeed meaty. This episode, “The Messengers,” tells the traditional story of Christ’s birth intercut with a dramatic clandestine mission to see a key figure from Jesus’s circle in the years after His crucifixion and resurrection. I won’t spoil the who’s or why’s of that plot, but certain favorite characters (if you can call a role based on a real-life person from Scripture a character) play pivotal parts in the story. Just like in the two full seasons of “The Chosen,” the title, “The Messengers,” has multiple meanings.

If that sounds like too much creative license apart from a word-for-word retelling from Luke 2, I’d suggest withholding judgment and giving it 45 minutes of your time. The first episode of “The Chosen” made this note on screen, and that “disclaimer” holds true through “The Messengers”: “The Chosen is based on the true stories of the Gospels of Jesus Christ. Some locations and timelines have been combined or condensed. Backstories and characters or dialogue have been added. However, all biblical and historical context and any artistic imagination are designed to support the truth and intention of the Scriptures. Viewers are encouraged to read the Gospels.”

An unequivocal truth claim and an encouragement to read the Gospels are a very strong foundation for “The Chosen,” even as it makes clear it’s not meant to be an expositional sermon. Dallas Jenkins, the creator and director of the series, has put it this way: “We take Bible stories, we work our way backwards to add the context, to add backstory: some of it’s historical, some of it’s cultural, some of it’s artistic imagination. All of it’s intended to support the character and intentions of the Gospels.” Jenkins has done that with “The Messengers.” Joseph and Mary feel more like real humans with real lives than in the typical Nativity play. (In a nice bit of continuity, the actors who portray Mary and Joseph are the same who played them in “The Shepherd,” the short film from Jenkins that predates “The Chosen” by several years.) While the interactions we see from post-crucifixion plot line almost certainly didn’t happen, it doesn’t distort or contradict Scripture. No, it’s not a sermon, but it’s entertaining, family-friendly, edifying, and most importantly, God-glorifying.

Just like with the previous two seasons, the acting and production are superb. In a genre where I’m used to making excuses for lack of artistic quality, there are no weak points to quibble over. Not a single one. The plot can stand alone such that you can happily watch “The Messengers” if you haven’t seen the previous two seasons worth of episodes, but you may lose some of the dramatic effect of seeing an old friend pop up on screen. A re-watch (or a first-time run through) of the two seasons plus “The Messengers” is a perfect way to relax during the week leading up to or following Christmas.

“The Shepherd” is the short film produced by “The Chosen” creator Dallas Jenkins’ for his church’s Christmas program. This 25-minute episode filmed on a neighbor’s farm is a take on the birth of Jesus through the eyes of the shepherds who were the first to hear of the Messiah’s coming. It’s available for free on YouTube, or on the same streaming platform viewers watch “The Chosen.”

The style and DNA of what would become “The Chosen” are all very visible with “The Shepherd.” It’s a little on the nose with its dialogue and is a little rougher around the edges of performances. For those who can’t get enough of the “Chosen,” those rough edges are pretty easy to ignore. The  prequel is a perfect companion piece to the new Christmas episode.