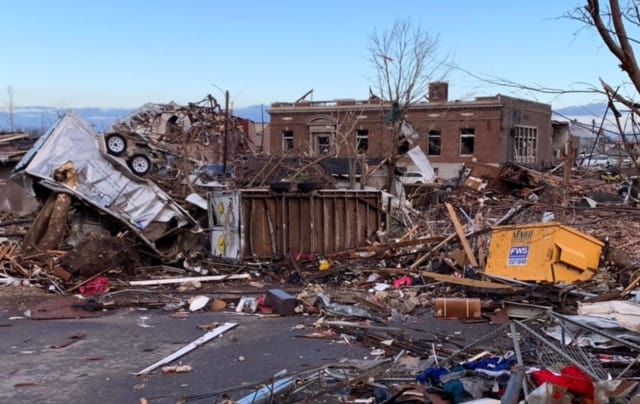 MAYFIELD, Ky. – Debris is piled up in the parking lot of First Baptist Church here. The church building sustained significant damage in the small town where dozens were killed as tornadoes swept across five states in the wee hours of Saturday morning, Dec. 11. (BP photo)

UPDATE (Dec. 15):  As of Dec. 15, Missouri Disaster Relief (DR) crews are working in the Kentucky towns of Princeton and Dawson Springs.  The operations may be shifting more to debris removal and mass feeding instead of chain saw work. MBC DR Assessors on the ground in those areas are reporting the tornado took a very narrow path and the affected areas are very clearly “totally destroyed” or “hardly touched.” There were only two chain saw work orders turned in after assessing several areas on Tuesday, Dec. 13. Childcare will be offered by the MBC DR childcare unit.

So MBC DR officials, in cooperation with Kentucky Baptist DR leaders say their work will probably shift toward helping homeowners sift through and remove debris from their properties.  Food and meals will be provided to the area by MBC units as needed. Chaplains are at work going though the area and praying with people, sharing the gospel.

One MBC DR chainsaw unit leader, Tom Malott, told the following story on Tuesday, Dec 15: “A homeowner and her sister made it safely to the basement moments before the storm hit. They said their ears popped repeatedly, but there was not the usual ‘train sound’ heard. The sister said the homeowner has been totally distraught, wondering how she could afford the damage and debris to be removed. She said her insurance won’t cover the cost. She drove over the top of a hill and said it was like a cloak lifted from her attitude and demeanor when she saw our DR unit in her driveway.  She was very thankful for the team’s help. They belong to First Baptist Church here in town (Princeton). They prayed and hugged us and cried with relief and gratitude.”

Another great “God moment” story was relayed by MBC DR volunteer, Mike Hibbard.  He is the incident commander of the unit located at First Baptist Church, Princeton.  He drove to nearby Dawson Springs to assess damages and help with locating a generator unit there to provide some power for the operations.

He related in a text that they set up the generator unit in the downtown area of Dawson Springs to provide power for an MBC DR shower trailer located there. There is no power in town the town currently. Hibbard noticed the power cord to the town’s Christmas tree was close by so he asked if he could light it up, and the town officials agreed.  It is providing a bit of Christmas cheer in a town seriously damaged by tornadoes.

Gaylon Moss, MBC DR director always reminds the volunteers that they are trying to bring “help, hope and healing” in times of disasters.  These are a few of the tangible ways Missouri Baptists are trying to share the love of Christ with folks in Kentucky.

Moss said if anyone would like to contribute to the tornado relief efforts they can do so through the website at www.mbcpathway.com.

The Pathway’s Dec. 13th report is below:

DEFIANCE – An F-3 tornado caused extensive damage in a four mile strip of Eastern Missouri near the town of Defiance on Friday, Dec. 10.  The storm was part of a band of storms that caused destruction from Arkansas, through Missouri, Illinois, Kentucky and Tennessee.

Toby Tucker, Eastern Missouri area coordinator for Missouri Disaster Relief (DR) was coordinating a response of local DR volunteers.  They were operating out of Charrette Baptist Church, Marthasville.  Cindy Gladden, a Missouri DR volunteer said their church was preparing food and took some to Defiance the day after the tornado.

Missouri DR is also sending teams to Princeton, Ky., in the western part of that state.  An incident management team (IMT) led by Mike Hibbard left on Sunday, Dec. 12, and chainsaw volunteers were expected to be traveling there on Monday, Dec. 13.

Missouri DR director Gaylon Moss said the initial teams would be followed by shower trailer and chaplain volunteers, and there may be a need for additional ministries in a few more days.

Moss said other states are sending in units to Kentucky, as well. He mentioned Illinois and North Carolina Baptists specifically, and there are responses from teams in Tennessee and Arkansas working in disaster locations in their states as well.

A large Amazon warehouse was destroyed in Edwardsville, Ill., causing several injuries and 6 fatalities as of December 12th.  It was reported about 50 people were in the warehouse when it was struck.

The town of Mayfield, Kentucky suffered extensive damage and there were many fatalities at a candle making factory there.  As of Sunday, Dec. 12, there had been 40 people rescued from the flattened factory, but there were 70 people still unaccounted for and likely killed.

The New York Times reported, Dec. 13, that at least 90 people had been killed in the storms, including 80 in Kentucky. The tornadoes that struck on that Friday evening stretched some 227 miles from Arkansas to Kentucky, possibly the longest single tornado track ever re