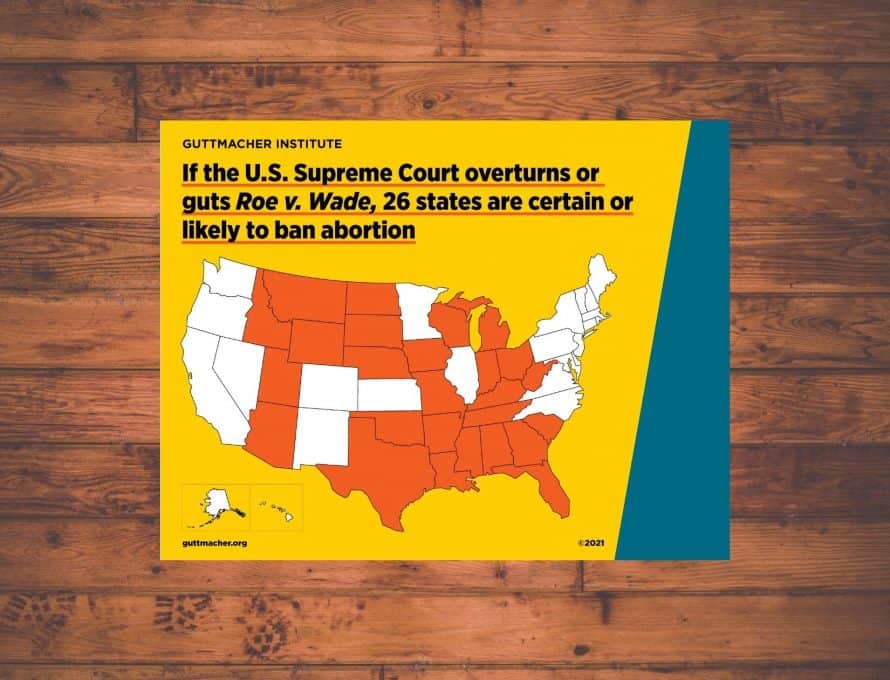 Missouri is among 26 states (in orange) that would ban abortion if the U.S. Supreme Court overturns Roe v. Wade. Missouri's neighbor, Illinois (in white), is not expected to ban abortion even with the removal of Roe v. Wade. (Guttmacher Institute image)

JEFFERSON CITY – Illinois Democrat Gov. J.B. Pritzker will soon sign a bill into law that undermines parental authority by repealing a law requiring parents or guardians be notified when girls younger than 18 are referred to abortionists.

The move by Illinois lawmakers is likely to trigger a legislative, and perhaps a legal, challenge from Missouri since it will undercut pro-life legislation signed into law in 2019 by Missouri Gov. Mike Parson. That law requires written parental consent before girls under the age of 18 can get an abortion in Missouri. It does not apply to minors traveling to Illinois for an abortion.

“We need to pray for those in Illinois who are intent on supporting abortion for any reason at any age,” said Susan Klein with Missouri Right to Life. “It is appalling that the top official of Illinois, Governor Pritzker, signs a bill that will support abusers of young, minor girls by taking them for an abortion without their parents knowing. When the protection of parental notification is taken away, those who would take young girls to abortion clinics for an abortion without a parent even knowing what is happening are given protection for being an abuser.”

The Illinois House voted 62-51, on Oct. 27, to repeal the law requiring parents or guardians in Illinois to be notified when girls younger than 18 are referred to an abortionist. The Illinois Senate passed the measure on a vote of 32-22. Both chambers are controlled by Democrat super majorities. The new law goes into effect June 1.

Planned Parenthood, the nation’s largest provider of abortions, praised the action. “In short, all Illinoisans, regardless of age, now have the full legal autonomy to make decisions about what’s best for their bodies,” according to a statement issued by Planned Parenthood Illinois.

The move by Illinois lawmakers may trigger action by the Missouri General Assembly, and Klein said her organization is already involved in discussions with legal experts and Missouri lawmakers. A law allowing Missouri parents to sue the state of Illinois or anyone who performs an abortion on a Missouri minor is one possibility. The Missouri Baptist Convention has pledged its support for protecting parental authority and the safety of Missouri minors.

“Missouri leaders work to prevent the horrors that abortion clinics and abortion supporters inflict on innocent women and girls,” Klein said. “Missourians will continue to work to protect women, girls and babies.  Our laws requiring informed consent prior to an abortion referral and parental notification will continue to be in place.  We encourage Missouri state officials to go after anyone who takes a minor for an abortion, in state or out of state, without the parent’s knowledge, to prosecute them with the full force of our laws.”

The action by Illinois lawmakers occurs as debate intensifies over parental authority in other issues, like school curriculum – including sex education, critical race theory and mask and vaccination mandates by the Biden administration. The issue may have settled the recent election for governor in Virginia after Democrat candidate Terry McAuliffe lost to Republican Glenn Youngkin after McAuliffe said parents should not be involved in what their children are being taught.

Planned Parenthood and the Sexuality Information and Education Council of the United States (SIECUS) are two organizations pushing hard for extremist forms of sex education in schools. They share the concept of sexual rights as inviolable human rights, a construct that removes parental guidance from the picture by making the state the final arbiter of whether a minor’s human rights are being violated.

“We will continue to look for ways to protect all Missourians, of all ages, from those in state and in other states, like Illinois, who are creating ‘unsafe situations’ for anyone, but especially for our young, innocent, minor girls,” Klein said. “Missouri will not let our families down, Missourians will fight to protect our daughters.”

Nationally, the U.S. Supreme Court heard arguments Nov. 1 against the new Texas law limiting abortions to the first six weeks of pregnancy. The high court will hear arguments in December on a Mississippi case that some believe could overturn Roe v. Wade. Decisions in both cases will be released by the summer. ν