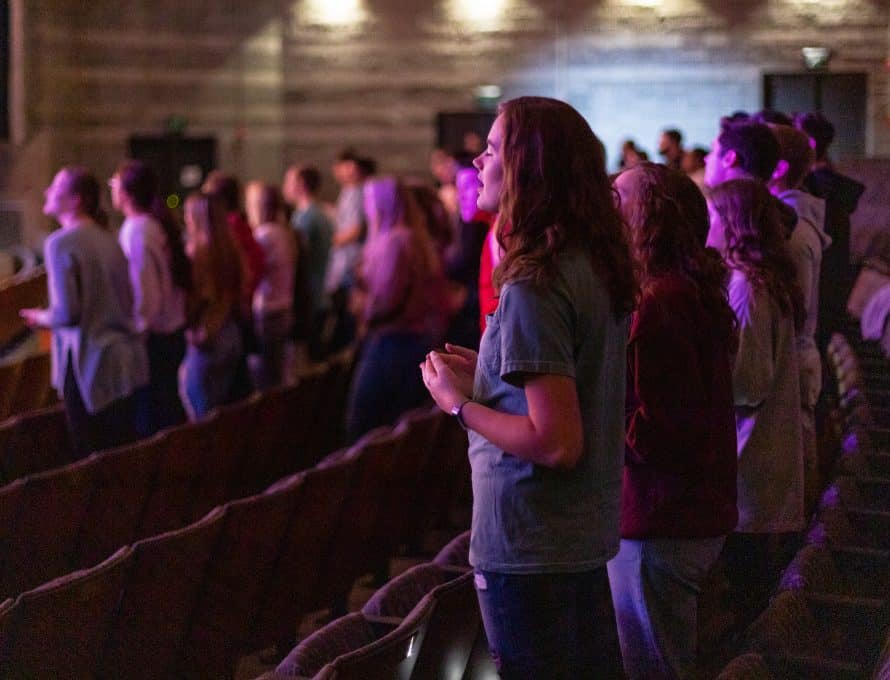 BOLIVAR – The SBU and surrounding communities gather during the main gathering on the closing night of "The Awakening" student-led revival.

BOLIVAR (SBU) – “The Awakening,” a three-day student-led revival on Southwest Baptist University’s Bolivar campus on Nov. 5-7, revealed a desire to grow in the Lord and to repent by providing the campus and surrounding community with a weekend of encouragement and equipping through learning, connecting and worship.

“Among attendees, there was a distinct desire to grow in the Lord and repent of complacency and trivial pursuits,” said Tyler Eads, a senior accounting major from Neosho, who organized the event for the second-straight year. “What really stood out to me is how the Lord revealed our need for an awakening and began spurring students on to abide.

“One professor likened the weekend to ‘base camp.’ We have been refreshed to grow nearer to the Lord. Throughout the weekend, there was a Spirit of confession, repentance, and thanksgiving among students.”

Each evening, a two-hour gathering was held for a time of praise and worship, discussion and prayer. Saturday consisted of five breakout sessions including local service, identity in Christ, biblical studies, cross-cultural mission and a panel discussion with faculty and staff.

Eads shared the biblical need for an “awakening” according to Ephesians 1, during the opening-night gathering.

“Despite being a faithful church, Paul earnestly prays that the Ephesians may receive the Spirit of wisdom and of revelation in the knowledge of God, specifically, the hope to which God has called them, the riches of his glorious inheritance in the saints, and the immeasurable greatness of power toward believers,” Eads said. “The Ephesians would be most deeply satisfied in knowing and treasuring God, but they will not know and treasure God unless and until they know him.”

The nightly gatherings consisted of more than 100 attendees, while the breakout sessions hosted around 20-30 students.

“I was very encouraged by the God-glorifying and soul-satisfying worship, student testimonies, messages, prayer times, breakouts, response, and student-led aspect of ‘The Awakening,’ said SBU President Dr. Rick Melson, who shared the message during the weekend’s final gathering. “God is at work on SBU’s campus and I am praying for continued fruit from the weekend.”

Eads said he was encouraged to have Dr. Melson and his wife and SBU First Lady, Tammy, be involved with the event, having been part of the SBU family for only a few months.

“Dr. Melson was eager to support and advocate for ‘The Awakening,’ even meeting to discuss it with me during his second week in office,” Eads said. “Tammy led a panel discussion for women, which was very well-received and enjoyed. The Melson family attended each evening session and were such an encouragement.”

“I had been worshiping with this amazing group of students all weekend, but the revival was the best conclusion to the weekend and an amazing start to the week,” Palmer said. “The presence of God was moving that night, it was evident, and I was so grateful to get to both be a part of the team leading and to listen to President Melson’s sermon.

“If that night spoke to what the rest of the revival was like, I can only see this revival growing as more students, and even community members, come to be changed by the power of Christ.”