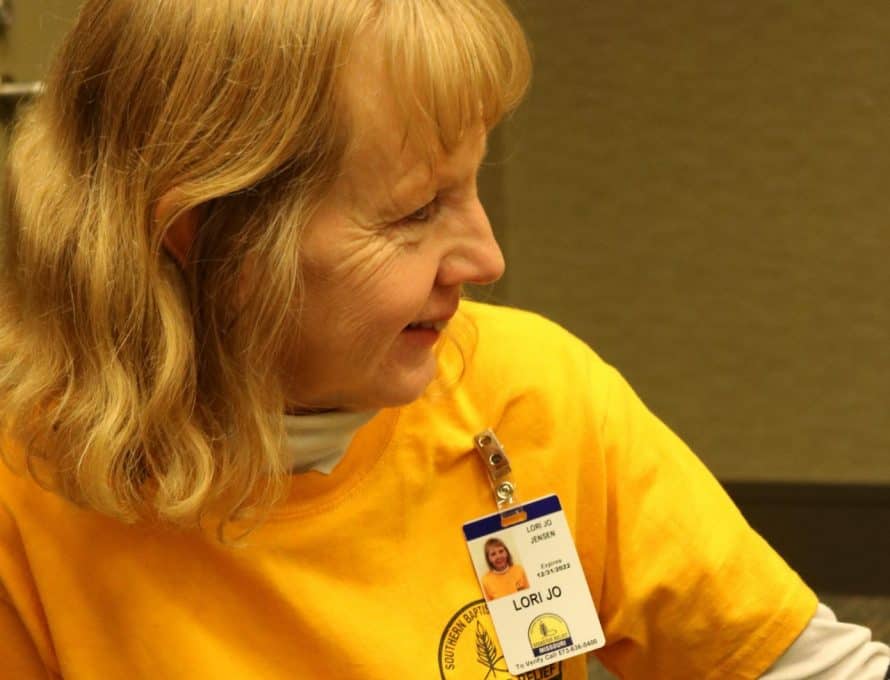 BRANSON – Gold shirts and hats were in abundance at the Missouri Baptist Convention annual meeting.  MBC Disaster Relief (DR) volunteers not only had an exhibit to represent their ministry, but they staffed the childcare area and served as door greeters and ushers in the convention hall.

Gaylon Moss, MBC DR director said they were asked to provide the childcare, the ushers and to staff a booth for DR as well as Baptist Builders and Hunger Relief.

He said he was pretty excited about the 2021 year of activity for DR.  “There was a DR response about every two to three weeks,” Moss said.  He noted there are about 2,500 volunteers trained and they are encouraging these volunteers to serve when the need arises.

In fact, during the convention Moss and his systems coordinator Eric Barb were working on deploying some volunteers to eastern Missouri which had experienced some tornado damage in the towns of St. Mary and Fredericktown.

Angie Hurd, a member of Fellowship Baptist Church, High Ridge, was coordinating the child care center located near the entrance of the convention hall.  She said they had 55 children which were all pre-registered for the care.  They opened their doors at 7 each morning and continued for the next 14 hours.

“We had 23 volunteers at the event” Hurd said.  “All of them are trained, credentialed and have gone through ‘Ministry Safe’ sexual abuse awareness training,” she added.

Hurd said they like to do the “non-disaster” type of childcare occasionally to keep their volunteers ready to go to disaster zones and serve when needed.

The children were greeted by “Steele” a therapy dog and his handler, Ann Stevens, of First Baptist Church, Richland.  Steele is a gentle therapy dog who loves to be petted and the children really like to interact with him.

Among the many door greeters who welcomed people into the convention halls were Kay Peck of Woodland Hills Baptist Church, Branson and Doris Neely, of Eudora Baptist Church, located in the country near the town of Dadeville.  Both Peck and Neely were recruited to serve at the convention and they have participated in disaster call-outs as well.  Neely said they had just returned from serving in Mandeville, Louisiana last month.

Other gold-shirt clad volunteers managed the convention hall microphones, distributed materials, collected offerings and took care of other duties in the meeting.

Moss expressed appreciation for the fine work of the convention volunteers.