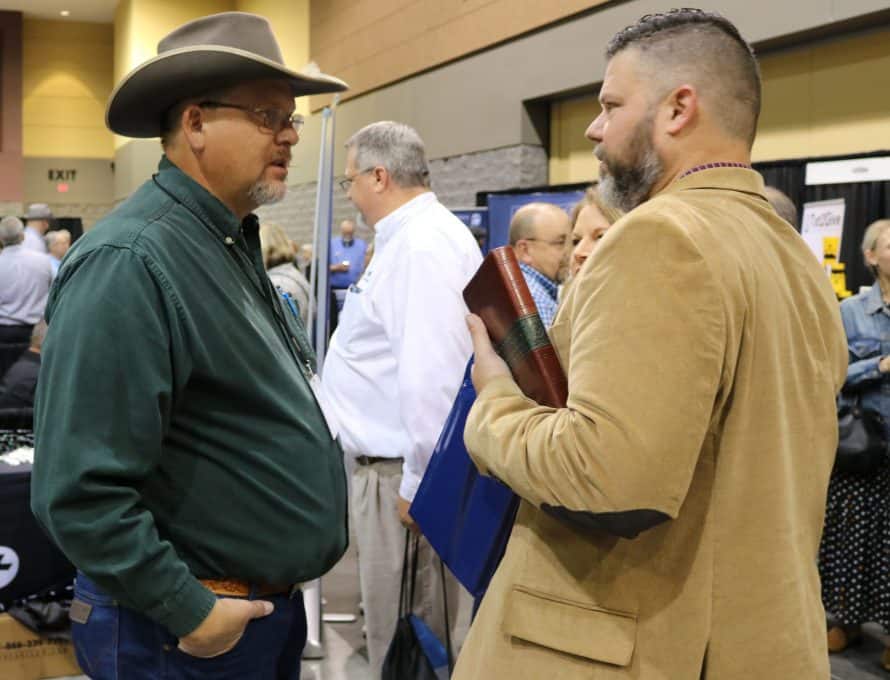 BRANSON – MBC convention attenders were drawn to the booth of the Minnesota-Wisconsin Baptist Convention (MWBC) because they were giving away samples of cheese and apples, favorite food products of those two states.  Representatives of that convention shared mission opportunities with Missouri Baptists as they munched on cheese and apples.

At the Montana Southern Baptist Convention (MSBC) booth a man with a big brown cowboy hat greeted convention attenders with a broad smile and a warm handshake. He talked of the “wide open, Big Sky countryside of Montana” and the vast opportunities for pastors and churches to connect with them.

The Missouri Baptist Convention has established these two state convention partnerships and encourage people to take mission trips up there. And they want to link churches together for support and encouragement.

Leo Endel, the executive director of the MWBC, has served that convention for almost 20 years.  He is also a pastor in Rochester, Minnesota near where their state convention office is located.

“We are probably 20 years ahead of Missouri where our culture has left it’s Judeo-Christian base.  We have to communicate the Gospel in a post Christian generation,” Endel said. He observes Missouri as being a much more receptive place for Christianity.  He said he was in a mission conference at Lake of the Ozarks recently and saw an electronic bank sign advertising a pro-Christian message which he said would never happen in his two states.

Endel said it is not all bad news in MWBC though.  Changes in the last decade in denominational funding for work in northern states has declined significantly but the churches of MWBC have been successful in planting many new churches and there is strong support for the Cooperative Program.  He said the Minnesota-Wisconsin convention is financially self-sufficient now and they have 4 full-time staff members along with 11 part-time or volunteers. They serve 14 ethnic groups and about 50% of their churches are predominately Anglo churches.

“We are healthier now than ever before,” Endel added.  He thanked Missouri Baptists for sending help to the MWBC.  He recalled mission teams from Sedalia, Cuba and Fulton communities and said there were many others as well.

The man with the big brown cowboy hat at the Montana booth was Darryl Brunson, a pastor of Expedition Church in Livingston, Montana.  He went to Montana from Alabama in 2018 to plant the church.

He said “God drew him to Montana.” He had been a pastor, youth pastor and children’s ministry director in Alabama but he felt called to the “Big Sky” country where the “lostness is so great.”  Brunson said about 90% of the people are lost.  There are 130 SBC churches in the state and many of them are small.  He said the statewide average attendance is about 32 persons per church.

“Pastors in our state face loneliness,” Brunson said.  “They have a need to connect with ‘somebody who gets it.”  He encouraged Missouri Baptists to establish a connection with a Montana church to communicate with the pastor and wife and to take mission trips to Montana occasionally to help with projects.

“We need church planters, pastors, VBS teams, servant evangelism teams, you name it.”  Brunson said some teams just come up and he links them with the municipal governments of area towns where they do everything from light construction to cleaning toilets in the city parks.  This creates good will and paves the way for church planting in those towns.

Endel said he appreciates the reciprocal nature of the partnership and said he is willing to come to Missouri and work with churches and associations in a simple “strategy planning” process which he outlines in his book, “Where Do We Go From Here: Strategic Planning For the Smaller Church.”  He will lead a weekend workshop for any Missouri church or association requesting it. “And I will do it for free and pay my own expenses” he added.

Both the Montana and Minnesota-Wisconsin Baptist representatives are in close contact with Rick Hedger of the MBC Multiplying Churches office.

Hedger told The Pathway, “I have seen this year, new pastors in Missouri take their first ever vision trip to form a partnership.”

“Excitement fills their soul as they see with fresh eyes what God may be doing in their church in Missouri as a result of partnering. I have seen value for associations as a group of pastors from one association go for a vision trip only to return later in this same year and serve on mission. They learn to be resilient as their plans fall apart due to snowy weather and quickly adjust to be on mission in a totally different way than they had planned. It brings about an elasticity in the members of a church or pastors who have to adjust on the fly.”

To learn more about connecting with Montana, Minnesota or Wisconsin check the MBC Partnership Missions website at: mobaptist.org/partnership-missions.