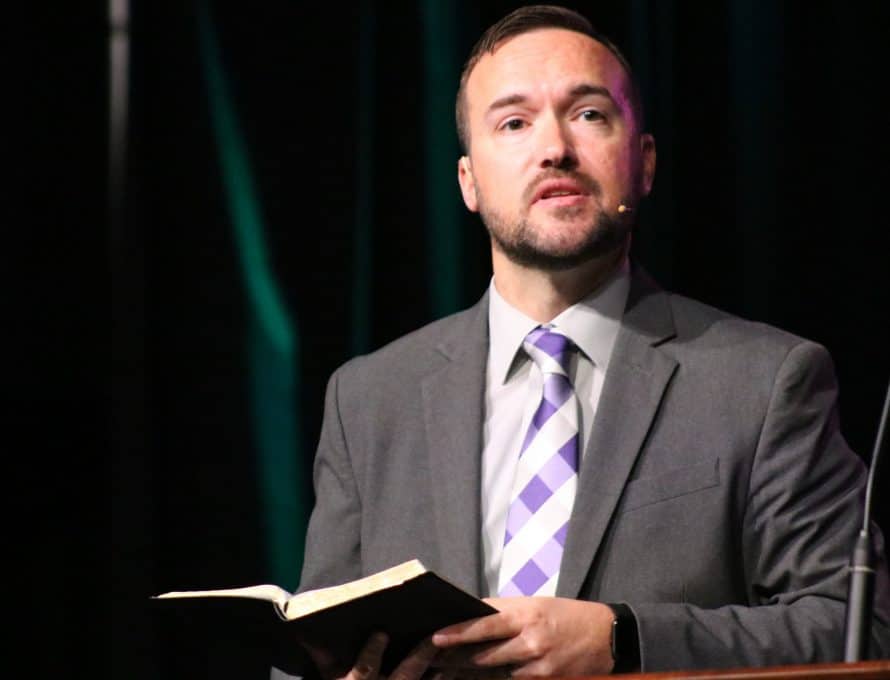 BRANSON – “We profess sufficiency of Scripture, but do we really believe it?” Matt Kimbrough, assistant professor theology and head of the Division of Christian Ministry at Southwest Baptist University and lay pastor at Springhill Baptist Church, asked the messengers and guests at the Missouri Baptist Convention annual meeting.

“Jesus tells a parable in Luke 16:19-31 about Lazarus and the Rich man,” Kimbrough said.  “Jesus was rebuking the Pharisees for their attitude toward money.  Jesus gives us details for the two men.  The rich man had extravagant wealth, wearing purple, fine linen and having plenty to eat and living in a gated community.”

Kimbrough acknowledged that all from the outside would have considered the rich man blessed and having the Lord’s favor, while Lazarus had a diseased body and couldn’t move on his own.  He was carried to the gate of the rich man to beg for scraps from the table and dogs came to lick his sores.

“There was a reversal after death,” Kimbrough said.  “Lazarus was given a place of honor next to Abraham to enjoy a heavenly banquet and the rich man was sent to Hades, a place far off from Abraham, Lazarus and God.”

Kimbrough continued with the story.  “The rich man made a desperate request; he doesn’t ask to come – he continues in his unbelief.  He also doesn’t address Lazarus.  He is concerned for his own needs and hasn’t changed his perspective.”

When the request wasn’t honored, the rich man asked that Lazarus go to the rich man’s brothers and warn them about the future.  “This request implies that it’s not my fault because I wasn’t warned, however, Abraham points out that they had Moses and the Prophets, but they didn’t listen.”

“Scripture was sufficient then, and it is sufficient now,” Kimbrough said.  “The rich man goes on to argue that someone coming back from the dead would make a difference.  Here the rich man is saying it is still not his fault because scripture is not dramatic enough.”

Kimbrough shared three relevant points that Christians and Missouri Baptists could take away from the parable.

1. Eternal suffering is for rea – “It is not politically correct,” Kimbrough said, “but, we see the wickedness of sin.  The rich man never changes his mind.”

2. Scripture is sufficient –“We have 27 additional books and the Big Picture of Salvation,” he continued, “Do we live like it? Or do we prefer listening to what is on the news media or Facebook.”

3. Sufficiency impacts preaching and teaching – “What give power or authority to what we say?” Kimbrough said.  “Are we diagnostic in studying our preaching?” he asked.  “What percentage of your sermon explains the passage? Do your members close the Bible after you read the passage? Are you preaching the whole Bible?

Kimbrough challenged the pastors to preach so that their church members “walk away with the meaning and relevance of the passage. God is speaking through the passage,” he said.