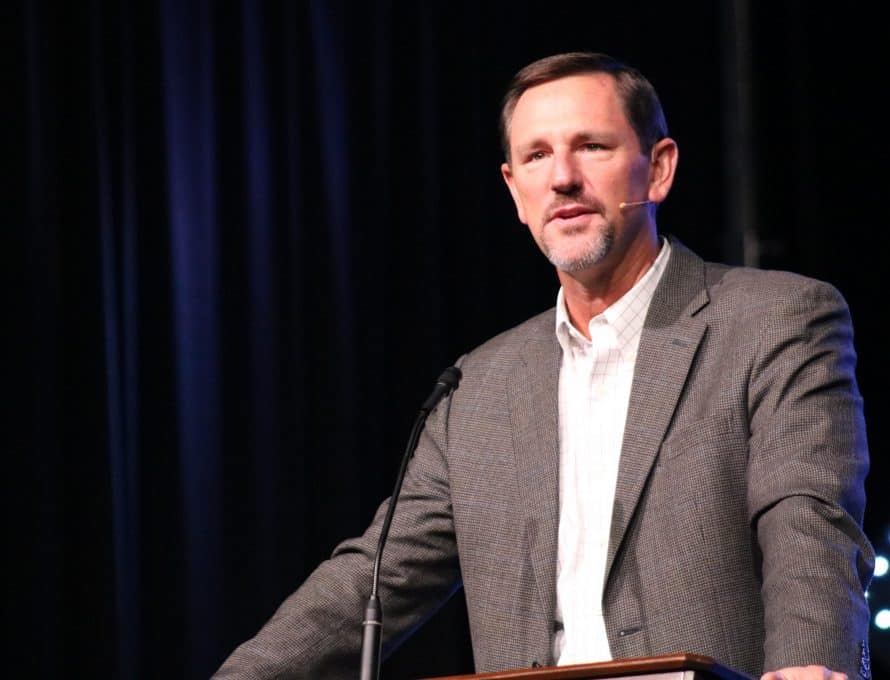 BRANSON – International Mission Board President Paul Chitwood challenges Missouri Baptists at their annual meeting, Oct. 25, to pray, give and go so that all nations might hear the gospel message.

BRANSON – Paul Chitwood, president of the International Mission Board (IMB), thanked the Missouri Baptist messengers for their prayers and financial support during their annual meeting, Oct. 25.

“We have 3,635 missionaries serving around the world because of this support,” Chitwood said.  “This has been the best financial year in the history of the organization.  Southern Baptists gave 177 million dollars to the Lottie Moon Christmas Offering.  Because churches support the IMB with the Cooperative Program, all of the Lottie Moon offering can go overseas.”

Chitwood used Romans 10:8-15 to emphasize the important mission of the church.

“I’m thankful for the promise in those verses,” he said.  “There is no distinction in people.  Everyone who believes knows He is Lord of all.”

“Thousands of Southern Baptists couldn’t make the trip,” he said, “but the gospel was not silenced. Missions continued because the missionaries were there and 144,000 came to faith in Christ and 18,000 churches were planted.”

According to Chitwood, more people are in heaven because of the work of Missouri Baptists around the world.

Chitwood pointed to the text to explain why Christians remained on earth.  “If we wonder why God doesn’t just save us and take us to heaven,” he said, “the answer is in the text.  Paul asks, ‘How can they believe if they have never heard?’”

Unreached people groups are a priority for the IMB.  “More lost are alive than in any other time in history,” he said.  “There are 7,317 unreached people groups with less than a 2 percent evangelical presence; 3,179 of those are unengaged with the gospel. That means that there is no church for them to hear or no missionary in the village.  How can they hear without someone sharing the gospel?”

“Why are we here? Our purpose is to preach the gospel,” Chitwood said. “We have an exclusive message for an exclusive kingdom, only those who have heard and have believed.”

Chitwood challenged the messengers and guests to continue praying and supporting the IMB financially. “Also, call out the called,” he said, “talk to your students about the opportunities to serve with the IMB like the two-year Journeyman program.”

Chitwood also referred to retirees in congregations.  “We can use a variety of occupations,” Chitwood said.  “Doctors, nurses, teachers and many others can use their skills and talents to serve.”