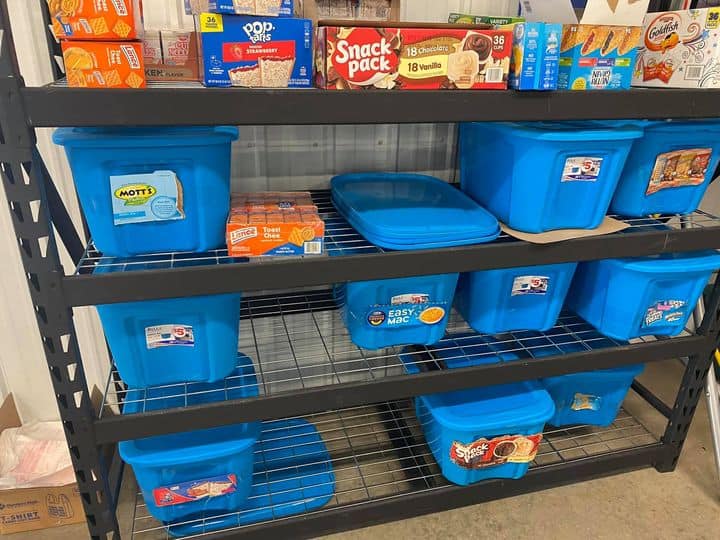 RICHLAND – Though it averages about 25 in attendance most Sundays, Brownfield Baptist Church here has a big heart for local children. The church has a food ministry to their nearby school, Gasconade C-3 in Laclede County. (Photo courtesy of Steven Strauch)

RICHLAND – Brownfield Baptist Church provides the food for fourteen backpacks that go home with students at their local school every weekend.  Brownfield Baptist is a small church in rural Laclede County near Richland.  They run about 25-30 on a good Sunday.  But they decided five years ago to be a blessing to the kids in their school district.

Stacy Herrill was talking to one of her clients at the nail salon where she works.  The lady who attends the Christian church asked her to help pack food backpacks for kids that are distributed in the Lebanon schools.

Herrill agreed to help on Wednesday evenings. After doing that a few years she asked her local school principal at Gasconade C-4 elementary and junior high school if food backpacks for kids in their school would be welcomed.  The principal was excited and eager to receive them.  Now there are 14 backpacks sent home with Gasconade school kids every Thursday afternoon.

Herrill and her son pack up the food items every Sunday after worship services, and they drop off the backpacks at the school on Monday mornings.

She said the school has 77 children attending, from Pre-K to 8th grade.  Fourteen of the children have at least some food to eat on weekends.  Herrill said there are some families that are without sufficient income and food can be scarce.

Herrill purchases the non-perishable food items once a month at the Sam’s Club, and they store it at the church in large tubs. They try to keep the following items on hand for the backpacks: cereal, oatmeal, granola bars, pop tarts, peanut butter, cheese crackers and macaroni/cheese packages.  It is about $4 worth of food in each pack.  “The food should provide meals for about  two and a half days,” Herrill said.

The people who live in and around Richland are mostly farmers or factory workers.  Some of the families receiving the backpacks are  unemployed and others are living on poverty level income. The principal of the Gasconade school it is making a huge impact on the school.  He said some of the families have several children so each of them take a backpack home.

“It is sad to know that there are kids out there that the only meals they get are at school,” Herrill said.  They try to supplement the breakfast and lunches that kids get Monday through Friday with something that the kids can easily prepare themselves on weekends, if needed.

The director of missions for the Laclede Baptist Association, Steven Strauch preached at the Brownfield church recently since the church was without a pastor.  He noticed the food neatly stored on some shelves and asked about it.

Strauch remarked, “Never say as a church, ‘We really don’t have enough people to do stuff.”  Though the church is small they have embraced this ministry to their school and are trying be a blessing.

Herrill described her church as “a great little country church…small… but family oriented.”

They are currently without a pastor but have an interim pastor, Bro. Wayne Finley, who has been preaching there a few months.

Herrill said she would encourage other churches to do something similar in their school.  “There is a need out there.  See if you can help your school,” she concluded.