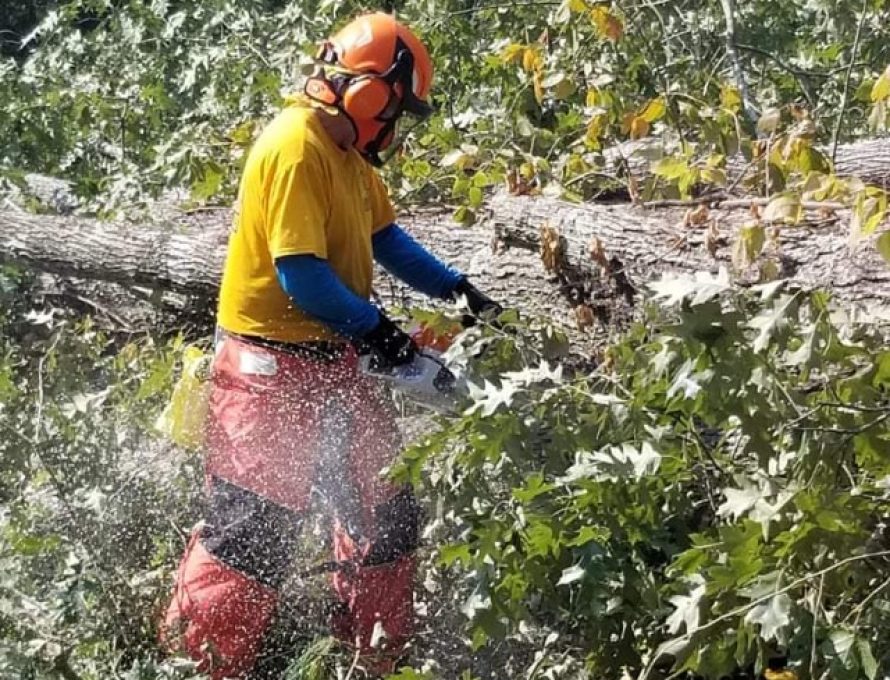 Missouri DR deploys to Louisiana in the wake of Hurricane Ida

EDITOR’S NOTE: This article was written by Cindy Gladden, a member of Charrette Baptist, Marthasville, who serves as public information officer with the Marthasville Fire Protection District and as a Missouri DR Mass Care responder.

MANDEVILLE, La. – Missouri Baptist Disaster Relief (MODR) volunteers were waiting and watching as Hurricane Ida surged into the Gulf Coast. They’ve seen it before and knew if forecasts were correct, they would be heading into the hurricane zone to bring whatever resources and comfort they could provide. Shortly, they would see what only God can provide.

Hurricane Ida slammed the shores of Louisiana on Sunday, Aug. 29, with sustained 150 mph winds. By Monday, August 30, the task force, comprised of a convoy of relief vehicles, was heading to Texarkana, Ark. to stage for impending response. Included in that convoy was a kitchen unit; a recovery unit set up for chainsaw or mud work; and a generator unit.

Corey Fontan, pastor of First Baptist Church of Mandeville, La., on the north shore of Lake Pontchartrain, said there was no hesitation to allow the MODR teams to take over their church campus.

“It was an overwhelming yes,” said Fontan. “I told our leadership team and deacons the Missouri team would be taking over the facility and that we weren’t going to be able to do our regular ministries. We were going into disaster relief mode.”

Fontan said there was no anticipation the area was doing to be dealing with this kind of devastation. He immediately began to contact church members to see how they weathered the storm. He welcomed the MODR team in and has been a critical liaison to the Incident Management Team (IMT) throughout the crisis.

Everywhere you turn there are stories from survivors and volunteers alike where God’s gift of grace is the theme. Jody and Pat Davis, whose home was severely damaged in the storm, are members of the church. Their story shows the fragility of human suffering and points straight to God as He was already working in Mandeville, La.

Originally from the state of Washington, Jody and Pat had never experienced a full-fledged hurricane. Jody works with young adults with disabilities and Pat is a finance manager. Unfortunately, the day they closed on their house purchase a few years ago, a storm came through and damaged their home, with trees tearing a hole in their roof, ripping off their deck and damaging their fence. Jody said it was finally repaired just six months ago.

“If a mandatory evacuation order had come through, I would have left,” she said.

By the time they realized how bad it was going to be, it was too late to leave. The couple, their teenage son, and their faithful labs, Bella and Luna, rode out the storm on the second floor of their home.

“I’ve never seen it like that – no moon or stars. Even my flashlight wouldn’t cut through the darkness,” she said. “A power line snapped like a rubberband. Water was up to the car tires and downed power lines were everywhere. We called for help and were told they couldn’t send anyone.

“We could hear the howling of the wind and the debris hitting. Daylight couldn’t come fast enough for me.”

A foot of water came into their home as they watched from the upper floor.

“You just had to watch it,” she said. “There was nothing we could do.”

What really broke her heart was the trauma that her faithful dogs experienced. Both Labs are well-trained, love to be among people and are usually the ones offering comfort. Tears came to her eyes as she shared the struggles her dogs went through as they eventually had to violate all the house training they had received.

With tears in her eyes, she told how she donned her boots as daylight appeared, and carried her dogs, one at a time, to a spot in her yard that was a little higher so she could help tend to their needs.

She didn’t know where to begin the recovery process. She saw an announcement on Facebook that the MODR team was coming to her church. Pastor Corey made contact and the couple made their way to the site. She met recovery team leader Tom Malott and he began his ministry to them.

Malott was wearing a pin on his lapel with the name of Jesus written on it in “negative space typography.” Jody struggled to read it because the letters of Jesus were written in the background. Malott saw her reading it and promptly gave the pin to her.

“It was the first time that I realized we are not alone,” she said. “I needed someone to come and give me direction. I need order. I can’t just spin my wheels.”

In a few short days, the carpet, appliances, drywall and furniture were removed.

“Everyone here seems to have a God face. You can feel it,” she said, “but you can SEE it.”

The story keeps coming around. On Friday morning, Sept. 3, Mandeville Police Lt. William Foil of the stopped by the DR location to ask for help. The previous evening, a family’s home had burned down. The family, including a special needs adult, was displaced and the father was in the hospital. The officer was trying to make some arrangements for the family.

Sitting in the debriefing area where volunteers were eating breakfast was Jody Davis, with Bella and Luna in tow. She was there to tell her