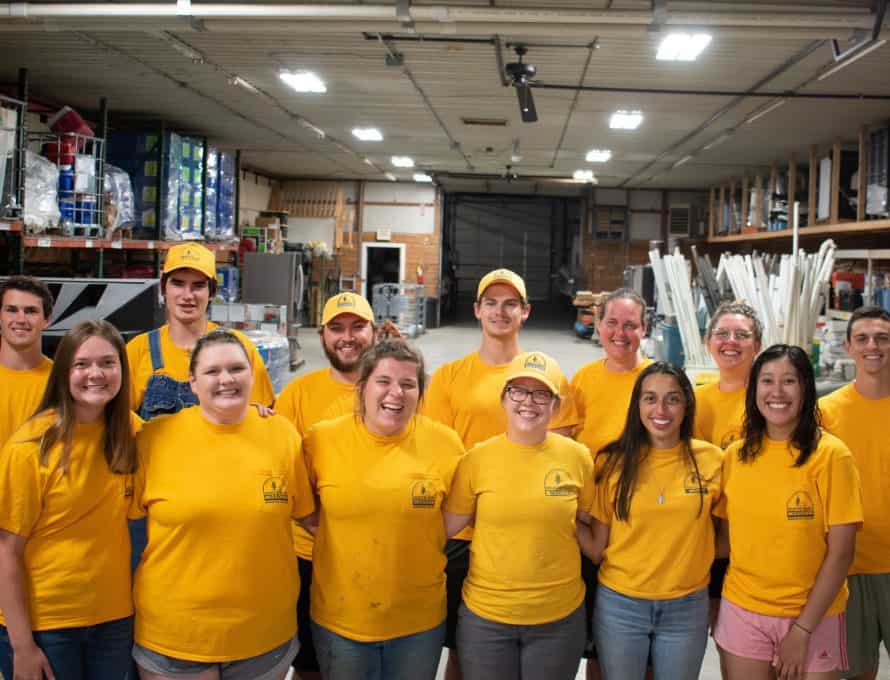 JEFFERSON CITY – Maddy Atwell has the assignment to oversee Disaster Relief college interns during the summer months.  She had 12 students in the program this summer.  The program of Missouri Baptist Disaster Relief (DR) is intended to help students learn about serving the Lord through assisting survivors of disasters.

Eight of the twelve students this summer were planning to go into the emergency management field. So this internship was a real boost to their career paths.  For all it taught them compassion and ministry skills as they helped the people and served them by cleaning up after disasters caused havoc in their lives.

The student interns began their summer with three days of summer missionary orientation at Hannibal-LaGrange University and then five more days of specific Disaster Relief training at the DR readiness center outside of Jefferson City.  There they were training in chain saw work, flood recovery, mass feeding, childcare and shower trailer ministry.

Then they embarked on eight weeks of travel to different assignments.  They went to the Southern Baptist Convention in Nashville and helped with childcare of messengers to the convention.  After that they were in Wallace, N.C., where they help rebuild houses that had been destroyed in a hurricane a few years ago.  The students were involved in carpentry work on the house rebuild project.

Then there was a windstorm in Perry, Mo., which required chain saw skills for downed trees.  Immediately following that the students were sent to Marshall, Mo., for flood recovery work.

Granby County, Colo., was the next address as they sifted ashes out of burned out homes from a wildfire.  And they finished their summer in Bloomington, Ill., doing flood recover.

Atwell said it was a whirlwind of a summer, and they did a lot of work but in some of the places there was limited contact with homeowners so a lot of it was strictly servant evangelism.

She said their most significant experience was when they were in Illinois, and they were gratefully received by volunteers and disaster survivors alike when they had spent much of the summer doing solitary work without a lot of human contact.

She said one intern, Nick Cummings, talked to a retired older woman in Illinois who was widowed and lived alone with her dog.  She had seven feet of water in her basement. Atwell said the two got along really well and she was asking why God had let this flood happen to her home. Cummings was able to share with her that God doesn’t do this because He is mad at us or we’ve done something wrong but that it is His way of redeeming people and bringing healing.  She felt upset but had a turnaround in her attitude as the students worked to clean up her home.  They found she was a believer but was not attending church, and  they made arrangements to connect her with Journey Church in Bloomington where they were staying that week.

Travel challenges such as a leaky tire on a van, hot humid weather and long hours of dirty work were the norm for the students as they spent their summer on the road.  But Atwell said it was a good summer, and she was glad for the experience and grateful for the 12 interns.

She will now turn her attention to assisting other Disaster Relief efforts, training and recruiting to prepare for next year.  To find out more about the MBC DR collegiate intern program check the DR website at:  www.mobaptist.org/DR.