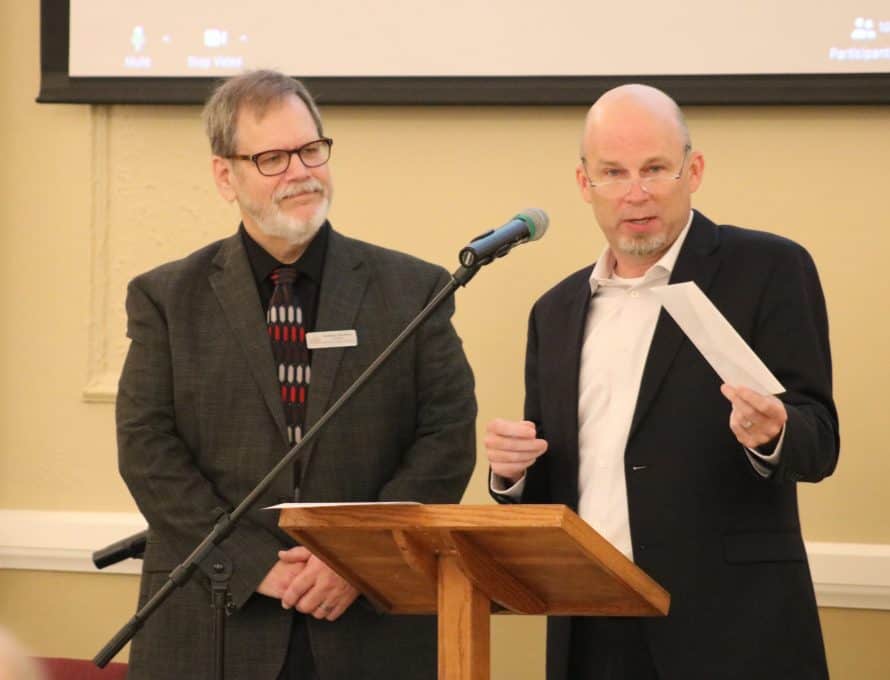 JEFFERSON CITY – Baptist Homes and Healthcare Ministries received the final installment of a $1.4 million gift when its trustees met at the Baptist building here, Aug. 13.

During their meeting, the board also took further steps in Baptist Homes expansion efforts and passed a resolution supporting the “For Family, For Life Campaign.”

During their meeting, Baptist Homes trustees applauded with gratitude when a check for $384,000.18 – the final distribution of a $1.4 million estate gift from the late Webster and Elizabeth Brown via the Missouri Baptist Foundation (MBF) – was presented to Baptist Homes president Rodney Harrison by MBF president Neil Franks.

“Today, I have an additional check … because Webster and Elizabeth believed in the power of the gospel,” Franks told Baptist Homes and MBF trustees who were gathered together during the presentation of the gift. He added that the presentation wonderfully displayed “Missouri Baptists working together.”

After receiving the gift, Harrison encouraged trustees to follow the example of the Browns by investing in ways that will bless gospel ministries for generations to come.

Harrison then prayed, “Father, I am overwhelmed at your provision and generosity for such a time as this, for a family who had a vision so many decades ago that is just now being fulfilled in (the Baptist Homes campus in) Ashland, Mo. Father, I thank you that not only did they have a vision, but they put feet to their faith through their actions. May we be faithful to steward their generosity, their obedience, for the glory of your name. Amen.”

During their business session, Baptist Homes trustees took steps toward expansion of the ministry by approving the formation of preconstruction agreements with Straub Construction. This enables Baptist Homes leaders and trustees to develop contracts for renovations at the Baptist Homes of Independence and for remodeling another recently acquired facility in Smithville.

Trustees also approved the use of $120,000, plus labor, for commercial vinyl flooring to be installed at the Baptist Homes campus in Arcadia Valley.

‘For Family, For Life Campaign’

Trustees also recommended that, upon approval from the MBC Executive Board, messengers of the MBC “authorize, approve and ratify the formation of new non-profit corporations by The Baptist Home, to serve as holding companies for each of the separate locations of The Baptist Home.”

Harrison explained to trustees that it is a common industry standard to form separate corporations for each campus within nursing home and long-term care systems.

In other business, Baptist Homes trustees:

• affirmed a strategic plan for creating consistent procedures and policies throughout the Baptist Homes system;

• approved a cost of living increase of 2.5 percent, to be factored into 2022 wages and pay scales;