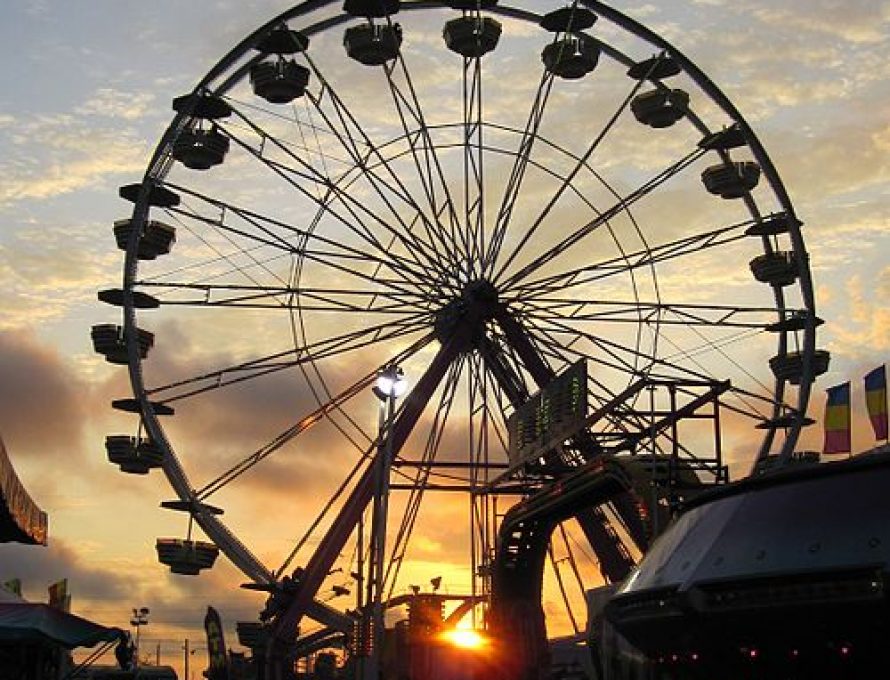 SEDALIA – The Missouri State Fair ran this year from August 12-22, and once again Baptists had a presence at the Fair in the Baptist tent. The Missouri Directors of Missions Fellowship sponsors the exhibit at the Fair, where attenders may register for a gift card giveaway in exchange for three minutes of their time. Volunteers from across Missouri share their testimonies and lead people to Christ during that three minutes. (Wikipedia photo)

He enlisted the help of the youth group in his church at First Baptist, Otterville, where he is pastor.  He is also the president of the Lamine Baptist Association and he is one of the organizers of the state fair Baptist tent ministry.  So the teenagers gathered in the youth room to put beads on leather strips to make bracelets. But Slocum thought it would be good to go through the colors of the beads and talk through their meanings. They also used a gospel tract called “Three Circles” to reinforce the salvation message.

He asked the teenagers if they knew Jesus and went around the room talking to them. One young man told him he was “broken” and needed the Lord.  They prayed and a soul was saved.

The next week Slocum took the beads to the fair to distribute to kids at the Baptist Tent and the young man stopped in and offered to work in the tent, sharing his new-found faith in Jesus.

Good things like this happen at this once a year ministry by the Missouri Baptist Directors of Missions Fellowship.  Many Missouri Baptists are involved as volunteers in this ministry where people stop by the tent and register to win a gift card from one of eight major retailers.  By agreeing to come in the tent they are asked to give three minutes of their time listening to a volunteer tell their story of how they met Jesus Christ.

During the fair, 195 Missouri Baptist volunteers shared the gospel  1,174 times, and 35 people professed faith in Christ. Three people rededicated their lives to Christ, and two sought help in finding a church home.

About 25 Baptist associations, churches and MBC staff sent teams to share Christ at the fair.

Melissa Maxwell led a group of teenagers and adults from Liberty Baptist Church, Everton.  Seventeen people from three churches and the director of missions invited people to come in the shady tent and cool off a little.  Kids were given science experiment gift packs, and the adults visited with fair attenders.  Five people received the Lord that afternoon.

“The team really rallied together,” Maxwell said.  “Everyone had a part, and it was awesome how God put us together.  I loved seeing the acceptance in the eyes of people when asked if we could have three minutes of their time.  God softened their hearts.”

On another day, Don Satterwhite, pastor of Calvary Baptist Church, Sedalia, worked in the tent with some of the members of that church.  Satterwhite has been involved in the fair ministry since 2015. He said the fair ministry helps his people know how to share their faith in a short time.  He has trained and involved over 30 people from Calvary to witness at the fair, which comes to their town every summer.

He added, “Another lady, Carolyn Calton, a senior adult, age 81, loves to come to the fair and tell children about Jesus.”

A newcomer to the ministry this year, Pastor Jeremiah Greever of First Baptist Church, Sedalia, said his first impression was he loved “the intentionality of the ministry.  It’s not entertainment.  It is a focused effort on what matters most, the gospel.”  He added, “Life is short, so I am glad they focus on the main thing.”

Greever said he hopes his church in Sedalia (which is very well acquainted with the fair and all the traffic and bother that it brings to their community for 10 days every summer) will embrace the fair ministry.  He hopes they will see the importance of sharing the gospel and that they will see it as a way to care for their community.

Russ Slocum kind of summed it up when he commented: “It just goes to show us that God is at work around us and it’s not limited to just the fair.  God had a plan to rescue lives, and it started the day before the state fair even began and it has been continuing….”