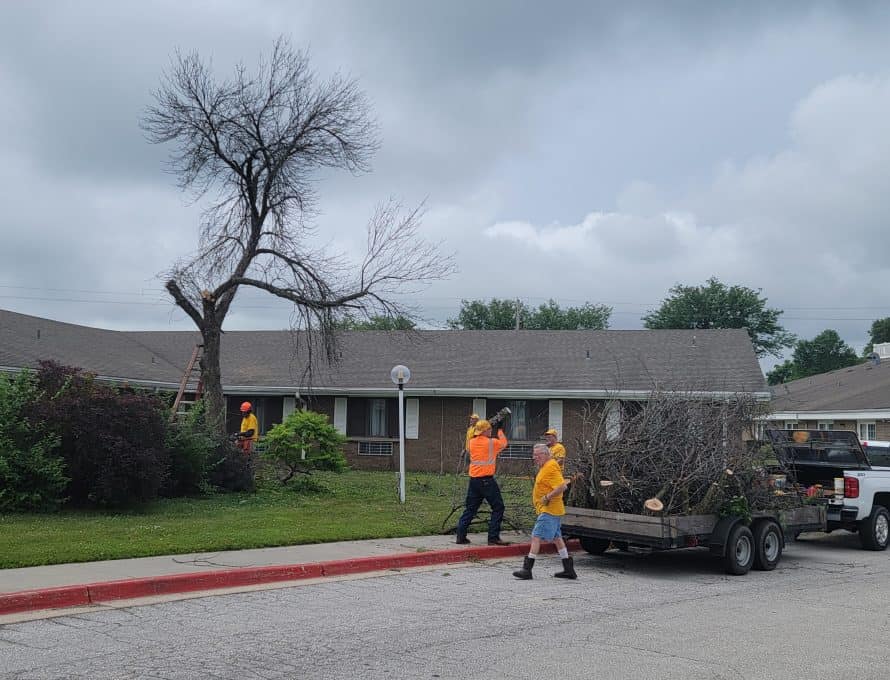 INDEPENDENCE – The dream of having a Baptist Homes’ campus in the Kansas City metroplex has become a reality. Breaking from tradition, this campus was acquired and not built from the ground-up. The campus, formerly known as Truman Gardens and Independence Chateau, is located in the historic city of Independence and is located off a quiet street in a family-friendly community. While small, it has a charm all its own. One entire wing has been recently updated with new carpet, paint and furnishings. The facility has a large dining area with large windows which provide an abundance of natural light. Also distinctive to this campus, is a very spacious and well-equipped physical therapy department and an enclosed courtyard with a garden area for residents who desire a quiet space to think, reflect and pray. In the days before Covid, the entire community utilized the physical therapy and rehab department for outpatient services.

Administrator Kate Flinn is excited to be a part of the Baptist Homes & Healthcare Ministries’ family. She has been in the long-term care industry for over eight years but came to Truman in 2017. She began as the social services director and became a licensed nursing home administrator in early 2020.  Almost immediately, Flinn was thrust into having to learn and adapt quickly to many challenges associated with COVID-19 and nursing home restrictions. In addition, Flinn’s warm smile and sunny disposition have endeared her to her residents and staff.

Flinn is not a stranger to northwest Missouri having grown-up in Kearney. She discovered her love for the aging while attending college. She began her college career at Northwest Missouri State in Maryville where she had an emphasis in biomedicine and spent time volunteering in a local nursing home. She later transferred to Missouri State in Springfield, Missouri, where she studied gerontology, the study of aging. She graduated with two degrees, a Bachelor of Science in Gerontology and Psychology. Flinn shared that she has always had an interest in caring for the aging. She said, “As people get older, everyone becomes more unique due to their various life experiences. I’ve always had a special love for the elderly. The most challenging aspect of caring for those suffering from dementia is becoming connected and helping them deal with the loss and grief associated with those losses.”

Flinn was raised in the Methodist church and understands the importance of providing spiritual care to the aging. She said, “I have a deep, personal respect for my residents and their faith background. I am committed to helping them continue their faith journey.”  Kate has already experienced the support of the Missouri Baptist Convention when members of the MBC Disaster Relief team showed-up with trucks and chainsaws to help remove a dead tree from the front of the building. She was deeply appreciative of their efforts.

The care facility is currently licensed for 120-beds; however, plans include reducing the number to 60-beds to allow for private rooms. If anything was learned through COVID-19, it was that transmission can be reduced by providing private rooms with private bathrooms.  Additional changes include the remodeling of the 16-unit residential care apartment complex located next to the main facility which was included as part of the purchase.

Baptist Homes President Rodney Harrison felt the opportunity for expansion into the Kansas City metroplex was a God – given opportunity. He said, “This has been on my mind since I became president back in early 2020. Baptist Homes has had a history of expansion. And so, in our 108 years, we have seen additional campuses, but they have been predominantly rural. And so, to miss out on, for example, the largest metroplexes, were something that was a burden on my heart. I love watching what God does when He takes something that needs improvement, and it is able to be restored to, not only usefulness, but to bring glory to God.”

Baptist Homes of Independence will be undergoing additional renovations and updating over the next twelve months but is open and ready to receive residents. To apply or schedule a tour, visit the Baptist Homes’ website, www.thebaptisthome.org or contact Kate Flinn, kflinn@thebaptisthome.org, phone (816) 373-7795.