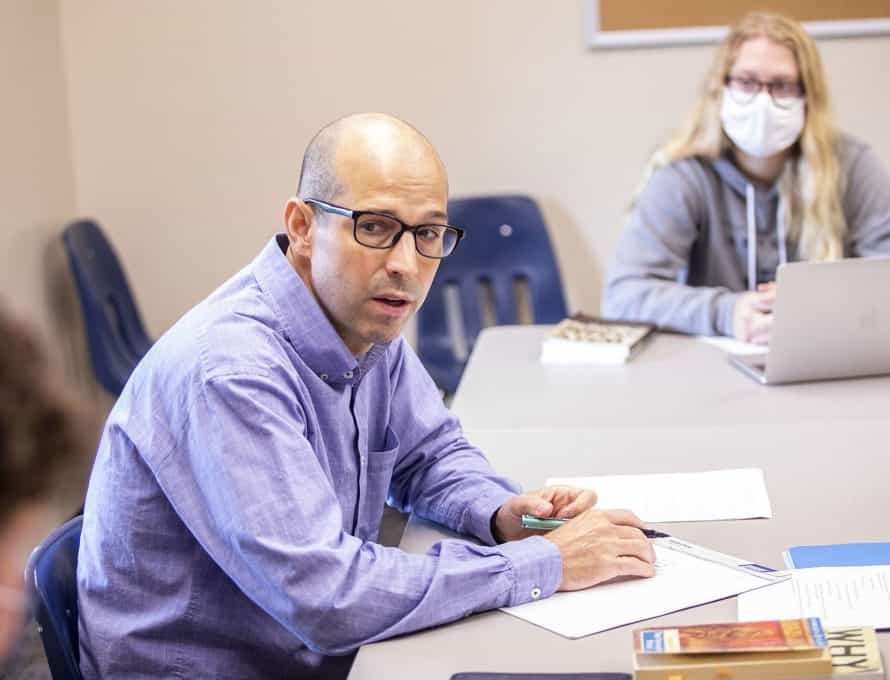 HANNIBAL, Mo. (BP) – As a professor of Christian studies and religious history at Hannibal-LaGrange University (HLGU), Miles Mullin is always looking for ways to communicate the history and impact of Baptist work to the students in his charge.

During the upcoming semester, one of Mullin’s tools for his Baptist history class will be Vision 2025, the strategic initiative adopted by messengers to the 2021 SBC Annual Meeting in Nashville earlier this summer.

“As I’m teaching Baptist history and heritage this fall, I always want students to be thinking about, not just our heritage, but how our heritage connects to the future and what ministry will look like for them,” Mullin said.

Baptist history and heritage is a required course for all students in the Christian studies program at HLGU, which is affiliated with the Missouri Baptist Convention. Mullin said the class covers history all the way back to the Reformation, but the majority of the second half of the class is specifically devoted to studying the history of the Southern Baptist Convention.

Topics covered include the formation of the SBC in 1845 and the 75 Million Campaign, which ran from 1919-1924 and led to the creation of the Cooperative Program in 1925.

Mullin plans to show students the connection between how Southern Baptists have partnered throughout their history, and how that enables their cooperation through an initiative like Vision 2025 nearly 100 years later.

“It strikes me that the six points [of Vision 2025] tie into our institutional organizational work, and shows how the entities of the convention help to do the work of the cooperative venture of the churches that is the convention,” Mullin said. “You’ve got the North American Mission board, you’ve got IMB [International Mission Board] in there, you’ve got the seminaries in there with calling out the called, it includes local church missions, talks about the Cooperative Program as well as involves Lifeway and the work of the ERLC.”

Though he was not able to attend the annual meeting in person this year, Mullin said he was impressed by the Vision 2025 presentation and by messengers’ approval of the strategic actions and wanted to share it with his students.

“I was very excited about Vision 2025 and seeing it come up,” Mullin said. “I thought the five points that came out of the Executive Committee were great, and I thought the sixth point that the messengers added from the floor made it even better.”

A graduate of Southeastern Baptist Theological Seminary, Mullin served as the vice president for academic administration and dean of the faculty for Hannibal-LaGrange before returning to teaching in 2015.

He said he plans to display a small Vision 2025 poster in his classroom and is even considering including Vision 2025 as part of the curriculum of the class as students learn about the history of the Southern Baptist Convention and the Cooperative Program.

“I think the Cooperative Program is brilliant,” Mullin said. “It really provides the mechanism whereby Southern Baptist churches can cooperate together in an organized format for the things that they have as a convention identified as priorities. I think it allows us to simultaneously persevere congregational autonomy, but also have a more cooperative and unified presence in the world. I think it’s critical.

“Students don’t know about the Cooperative Program and when they find out about it, they’re like, ‘Oh, that’s pretty cool.’”

Because the course tends to have only about 12-15 students, Mullin said he also hopes to have open discussion and dialogue with students about Vision 2025 with an opportunity for them to make suggestions about things they would have included had they been crafting the initiative.

He said the inclusion of strategic action No. 6 about the elimination of sexual abuse and racism from churches shows that although Southern Baptists have not been perfect, they are taking steps to treat all people of all nations with dignity.

“For point 6 we talk about how Southern Baptists haven’t always lived up to what the Bible teaches about treating people of different races or women well, but that we strive to do that in accordance with the Scripture,” Mullin said.

“We learn two things from history: We learn what our forbearers did well, and this can help us to do the same things well. It also helps us see where our forebears didn’t do some things well and to hopefully avoid some of those errors.”

Mullin said he hopes to help students understand that the aspects of Vision 2025 such as church planting, evangelism, calling out the called and reaching the next generation have always been an important part of Southern Baptist ministry.

Knowing many of his students will go on to serve in missions within the SBC, he hopes to inspire his students not only to learn about Vision 2025 but also to become a part of fulfilling its goals through both in their own ministry contexts and through supporting the Cooperative Program.

“The Cooperative Program still works really well, and I still think that we can do more together than we can do apart,” he said.