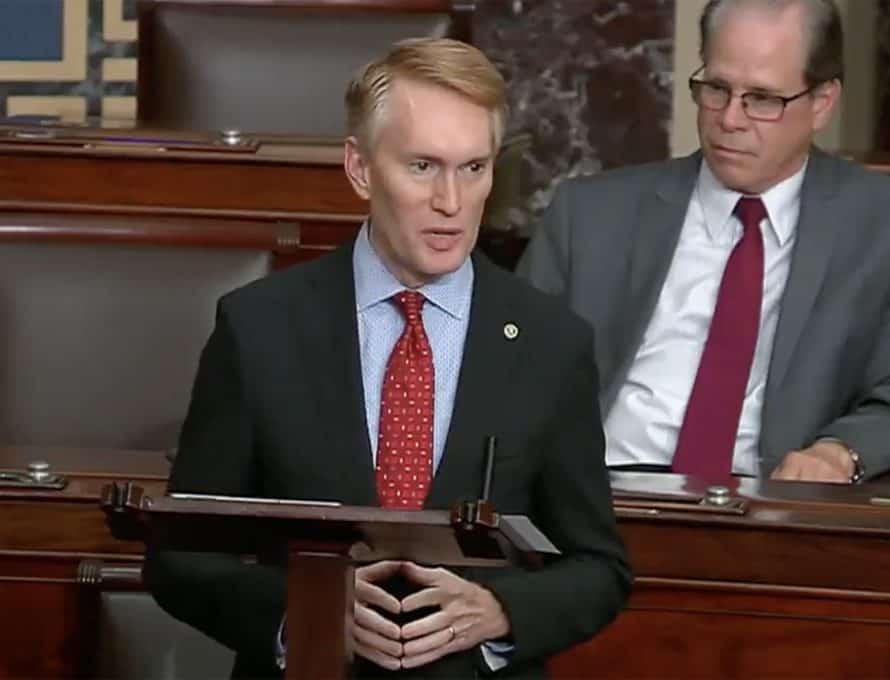 Sen. James Lankford, R-Okla., speaks in support of an amendment barring federal funds from being used to pay for abortions.

WASHINGTON (BP) – Opponents of taxpayer funding of abortion gained an encouraging victory in the U.S. Senate late Tuesday (Aug. 10) to the satisfaction of the Southern Baptist Convention’s ethics entity.

During consideration of a budget resolution, senators approved in a 50-49 vote an amendment by Sen. James Lankford, R-Okla., that bars federal funds from being used to pay for abortions. The amendment also blocks funding for government programs that discriminate against individual health care professionals or institutions that object to abortion.

Democratic Sen. Joe Manchin of West Virginia provided the deciding vote for the measure. He joined all the Republicans who were present in the evenly divided chamber in support of Lankford’s amendment. Manchin joined his Democratic colleagues to approve the amended, $3.5 trillion budget plan by a single vote.

“As lawmakers craft legislation, they should start from a foundation that protects life – something that has been a source of bipartisan agreement for decades,” said Sobolik, acting public policy director of the Ethics & Religious Liberty Commission (ERLC), in written comments. “This amendment restores that policy in this budget process.”

The ERLC urges the House of Representatives “to follow the Senate’s lead and ensure these important pro-life riders are part of the budget resolution,” she said.

The ERLC urged Senate leaders in a July 30 letter to restore long-standing, pro-life policies removed from spending bills by the House. The Democratic-controlled House had approved appropriations bills in late July that eliminated the Hyde Amendment and other measures that either prohibit federal funding of abortion or, as in the case of the Weldon Amendment, protect the conscience rights of pro-life health care workers and institutions.

The Hyde Amendment has barred federal funds in Medicaid and other programs from paying for abortions in every year since 1976. The Weldon Amendment has prohibited since 2004 government discrimination against pro-life health care providers and insurance plans.

Messengers to the 2021 Southern Baptist Convention Annual Meeting in June approved a resolution that denounced any attempt to rescind the Hyde Amendment and urged the retention of all pro-life “riders,” which must be approved each year in spending bills.

The Senate’s newly approved resolution is part of a Democratic maneuver known as “budget reconciliation,” which enables passage of legislation without the normal requirement of 60 votes to invoke cloture and halt a filibuster. In the reconciliation process, only a majority is required for passage. The Senate-passed resolution provides guidance for its committees in writing the actual budget bill for fiscal year 2022.

Though Lankford’s amendment is not binding, it apparently indicates supporters of long-standing pro-life policies have the necessary votes to retain such measures.

In a speech on the Senate floor before the vote, Lankford, a Southern Baptist, said his amendment would be consistent with the Hyde Amendment. Hyde “reflects a decades-long consensus that millions of Americans who profoundly are opposed to abortion should not be forced to pay for the taking of human lives of children or incentivize it with their taxpayer dollars,” he said.

“Millions of Americans of faith and of no faith know that the only difference between a child in the womb and outside the womb is time,” he said. “Just because they are smaller people doesn’t mean they should be any less protected by law.”

Lankford’s amendment was one of more than 40 such measures considered during a lengthy “vote-a-rama,” as it is known, that did not conclude until nearly 4 a.m. (EDT) Wednesday (Aug. 11). Republican Sen. Mike Rounds of South Dakota was absent because of a medical need in his family.

The ERLC included the protection of pro-life “riders” in spending legislation as one of its priorities in its 2021 Public Policy Agenda. In May, it joined in a letter signed by more than 60 other pro-life advocates that asked Senate and House leaders to maintain the bans.

The Hyde Amendment – which includes exceptions for a threat to the mother’s life, rape and incest – has saved the lives of more than 2.4 million unborn children since its inception, according to an estimate in July 2020 by Michael New, veteran researcher and associate scholar of the pro-life Charlotte Lozier Institute.

Gayla Prewitt’s pro-life screenplay, ‘Glimmer,’ has been recognized as an official selection at the 2020 International Christian Film and Music Festival in Orlando, Fla., and as a nominee for this year’s Branson International Film Festival