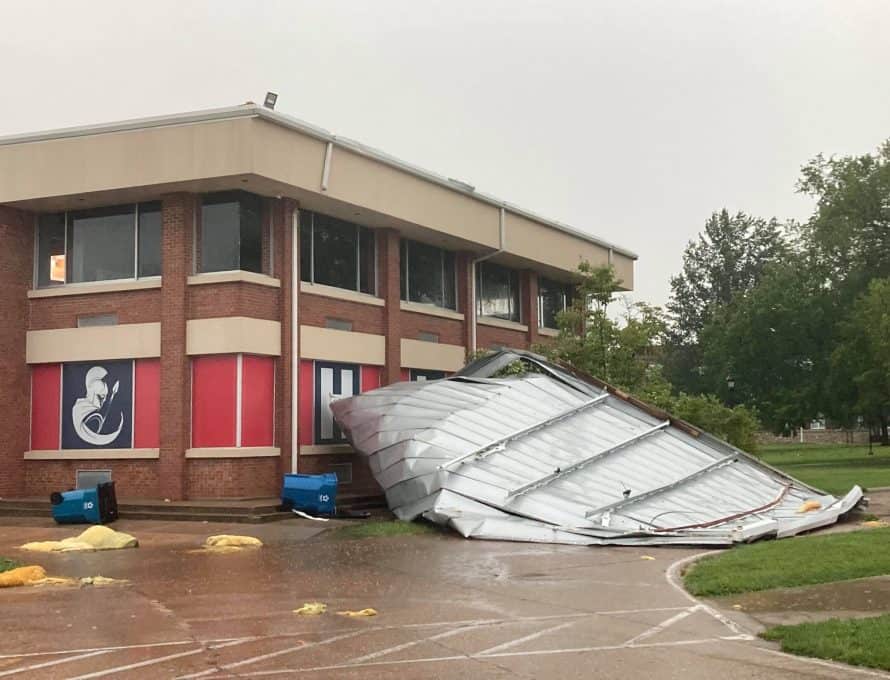 The roof was blown off of Hannibal-LaGrange University's student center during a storm, Aug. 12. (HLGU photo)

The main damage from the late afternoon storm, Aug. 12, was to the student center in the middle of the campus, where a large section of the roof was stripped off and thrown to the ground. However, other buildings had water infiltration, and some students were evacuated from one housing unit for a time.

In addition, numerous tree limbs were downed all over the campus.

Fortunately, no one was injured during the storm.

A power outage from the storm also kept employees from their offices, Aug. 13, but power was restored by mid-day.

Bleigh Construction Company employees removed the tin roof and wet insulation on the ground, and several of them surveyed the damage on the roof.

HLGU President Anthony Allen told The Pathway that, when the roof came off the student center, water filled the building.

HANNIBAL – Staff, faculty, students and other friends Hannibal-LaGrange University help clean up the campus after an Aug. 12th storm brought damage across the campus. (Pathway photo by Dan Steinbeck)

“We need a plan B to start the semester,” Allen said, adding that the student center would be out of commission for at least the fall semester. This means various student life utilities, the bookstore, a food services station and the campus ministry would be re-located to another area on campus.

“We’re fortunate there were no injuries and fortunate to have an amazing turnout of friends, students, employees and local people (to help us),” Allen said. “They were able to start bright and early this morning (Aug. 13).”

In an Aug. 13th Facebook post, Allen said, “All in all, progress is going well. … We’ve restored power and look forward to being in full swing on Monday (Aug. 16). Our offices open at 8 a.m.”

Nathan Hammock, physical plant director at HLGU, said the storm was eerily similar to one that hit the campus in May, 2013, where the science center was damaged and trees were downed.

“What happened to the student center was similar to the damage of the science building in 2013,” Hammock said.

Hammock also said a number of the campus buildings had water leaks.

“The rain was so hard, and the wind blew sideways,” he added.

“It’s too early to tell how many trees were damaged,” Hammock said, as student athletes, HLGU staff, and other volunteers were cutting and moving downed limbs and branches. “I think there are a minimum of 25 trees damaged.”

The dozens of volunteers methodically went from one fallen limb to another working together. Others used chainsaws, leaf blowers, utility vehicles, rakes and shovels to move the debris. Several picked up piles of smaller sticks and put in small piles near curbs.

“It’s overwhelming that they all showed up. We hadn’t even put out an appeal for help,” Hammock said, voice choking.

Some athletes arrived the day before. A work-day to freshen up the campus for incoming students was already scheduled for Aug. 14, but some of the focus has now changed with the storm. New student move-in day was set for Aug. 19. Classes start on Aug. 23.