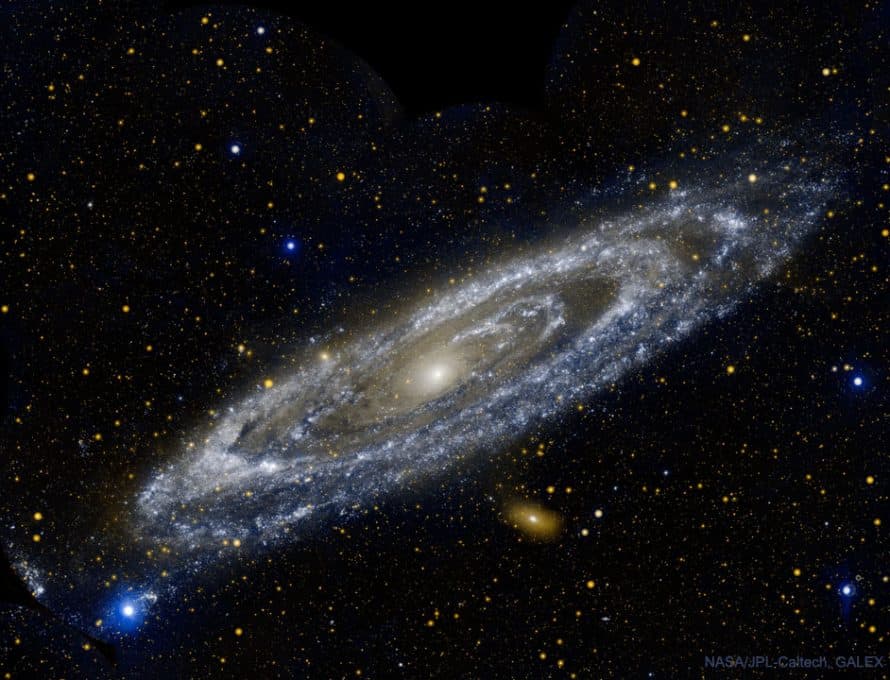 The Andromeda Galaxy, pictured here in Ultraviolet, is the Milky Way's nearest neighbor. In the background, multiple specks of light, which may appear to be stars at first, are actually more distant galaxies. According to NASA, some scientists estimate that the “observable universe” contains up to 200 billion galaxies, but others say this is “10 times too low.” (NASA photo. See https://science.nasa.gov/andromeda-galaxy-ultraviolet)

OZARK – When Phillip Shuford looks on the night sky, the chaos of the world fades away as he reflects on the God who spoke stars, planets and whole galaxies into being.

“I’m out there with my telescope, and it’s quiet,” Shuford, director of missions for the Tri-County Baptist Association, told The Pathway. “It’s a faith-building exercise to go out and see the wonders He’s put in the heavens. … In some ways, it’s an act of worship.”

Throughout his life, Shuford has loved stargazing. In fact, when he was a child, he was given a kit for making the mirror for a telescope. Since that time, he has wanted to make his own telescope by hand. 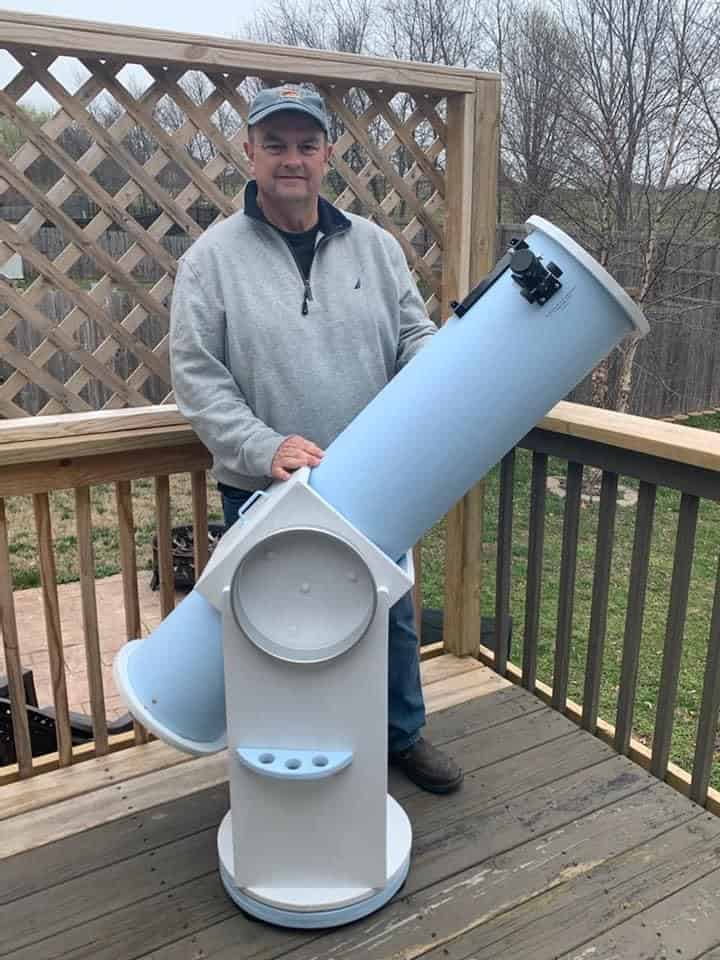 OZARK – Phillip Shuford, director of missions for the Tri-County Baptist Association, stands by the Newtonian reflector telescope he built by hand. (Photo courtesy of Phillip Shuford)

“So, when we moved to Missouri, in 2013,” he said, “I started actually building it.” Though he put the project aside for a short time, he picked it up again in the winter of 2019 and finished it last March.

Now, Shuford can gaze at the moon, planets and stars through his hand-crafted, 8-inch Newtonian reflector telescope – a type of telescope first invented by the famous scientist, Sir Isaac Newton, in 1668.

Newton also affirmed the existence of God. In fact, inscribed on Shuford’s telescope are words from the great scientist: “This most beautiful system of the sun, planets and comets could only proceed from the counsel and dominion of an intelligent and powerful Being.”

Shuford agrees wholeheartedly, and under the eyeglass of his telescope he put the words of Psalm 19:1 in English and Hebrew: “The heavens declare the glory of God.”

“God,” Shuford said, “has inscribed his initials on the heavens.”

Indeed, scientific discoveries from the past century affirm the existence of an Intelligent Designer who created and intricately shaped the universe not only to give humans’ life, but also to give them an opportunity to see His glory in the heavens.

‘The necessity of a beginning’

Nearly a century before Shuford finished his Newtonian telescope, another stargazer looked through a much larger telescope.

This stargazer was astronomer Edwin Hubble (1889-1953), for whom the Hubble Space Telescope is named. In 1923, he gazed on the heavens through the 100-inch Hooker Telescope, which was housed at the Mount Wilson Observatory in California. Built in 1917, it was the largest telescope in existence until 1949.

At the time, most scientists believed that the universe stretched no farther than the far reaches of the Milky Way Galaxy, the same galaxy that contains our own solar system.

At that same time, many scientists also believed – despite what Scripture says in Genesis 1 and Hebrews 11:3 – that the universe had always existed. Even the great, 20th-century physicist Albert Einstein refused to believe his famous Theory of Relativity when it implied that the universe had a beginning. He even changed his mathematical formulas to avoid this implication.

But in 1923, as he fixed his gaze on one hazy patch in the heavens, Hubble made a discovery that demolished scientists’ previous assumptions. First, he realized that the “Andromeda Nebula” wasn’t in the Milky Way Galaxy, and that it wasn’t a nebula at all. It was, in fact, the Andromeda Galaxy – our nearest neighbor, as galaxies go, though it lies more than 2.5 million light years away from earth. 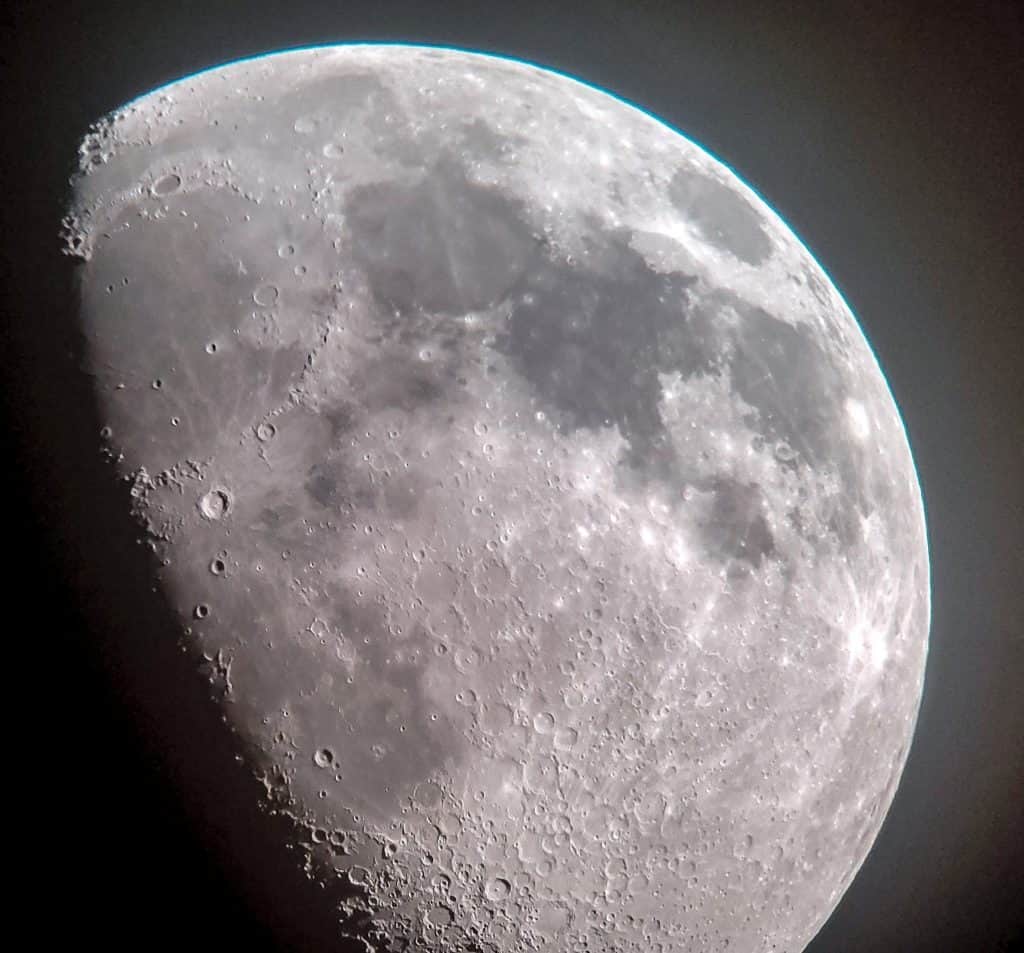 OZARK – Phillip Shuford, director of missions for the Tri-County Baptist Association, has taken this photo of a waxing gibbous moon through his telescope, alongside many other photos of the moon and planets like Jupiter and Saturn. (Photo courtesy of Phillip Shuford)

As he continued his investigation, Hubble discovered more galaxies. The universe was, indeed, vastly larger than scientists had thought.

In fact, more recent images from the Hubble Space Telescope revealed 10,000 galaxies in one “tiny patch of sky” measuring only “one-tenth the diameter of the moon.”

All told, some scientists today estimate the “observable universe” contains up to 200 billion galaxies, though some research suggests this estimate is “10 times too low,” according to NASA.

But the vast size of the galaxy was only one of Hubble’s discoveries. As he continued his research, he also realized that the galaxies were expanding at a uniform rate, suggesting that there was a time when the universe had a beginning. Hubble even invited Einstein to California to examine the evidence himself.

After doing so, Einstein admitted his previous mistake, saying, “I now see the necessity of a beginning.”

In the decades following Hubble’s discovery, more scientific evidence confirmed “that the universe is not eternal, but that it had a finite period of time, that there was a time whenever the universe wasn’t,” according to Kenneth Keathley, senior professor of theology at Southeastern Baptist Theological Seminary and a former Missouri Baptist pastor.

For Christians, the answer is clearly spelled out in Genesis 1:1.

But there’s more, Keathley said. Not only have scientific discoveries confirmed the beginning of the universe (suggesting a Beginner), many scientists also believe the universe seems intricately and exactly “fine-tuned” for the existence of life.

“The universe seems to be poised on a razor’s edge,” Keathley said. “It’s a remarkable phenomenon that scientists themselves observe. They notice that if the various constants of nature had been slightly in one direction or another, then life on Earth would not be possible. In fact, life wouldn’t be possible anywhere in the universe.”

Some scientists have listed at least two-dozen, mathematically precise conditions that have to be in place for any life to exist on earth – some of them, difficult to grasp without a scientific background.

But, some are easier for the uninitiated to understand. Take, for example, the precise location of the Earth in our solar system. According to the book, 40 Questions about Creation and Evolution, co-authored by Keathley and Mark Rooker, “if our planet were just one percent closer to the Sun, the additional heat would cause the oceans to evaporate. However, if the Earth’s orbit were just 5 percent farther away from the Sun, all the world’s oceans would be frozen solid.”

Taken together, the complex and specific conditions needed to sustain life on Earth suggest that the universe was made precisely to sustain life, according to Guillermo Gonzalez and Jay W. Richards in their book, The Privileged Planet: How Our Place in the Cosmos is Designed for Discovery. Life isn’t the outcome of chance, but of design.

But, as the subtitle for their book suggests, human discovery also appears to be a matter of design.

“Simply stated,” they write, “the conditions allowing for intelligent life on Earth also make our planet strangely well suited for viewing and analyzing the universe.

“The fact that our atmosphere is clear; that our moon is just the right size and distance from Earth, and that its gravity stabilizes Earth’s rotation; that our position in our galaxy is just so; that our sun is its precise mass and composition – all of these facts and many more not only are necessary for Earth’s habitability but also have been surprisingly crucial to the discovery and measurement of the universe by scientists. Mankind is unusually well positioned to decipher the cosmos.”

In other words, the grand and complex cosmic design that fosters human life on earth also enables Phillip Shuford, on a summer night in Ozark, to gaze into the heavens and glimpse – as he calls it – the “initials” of our cosmic Designer.