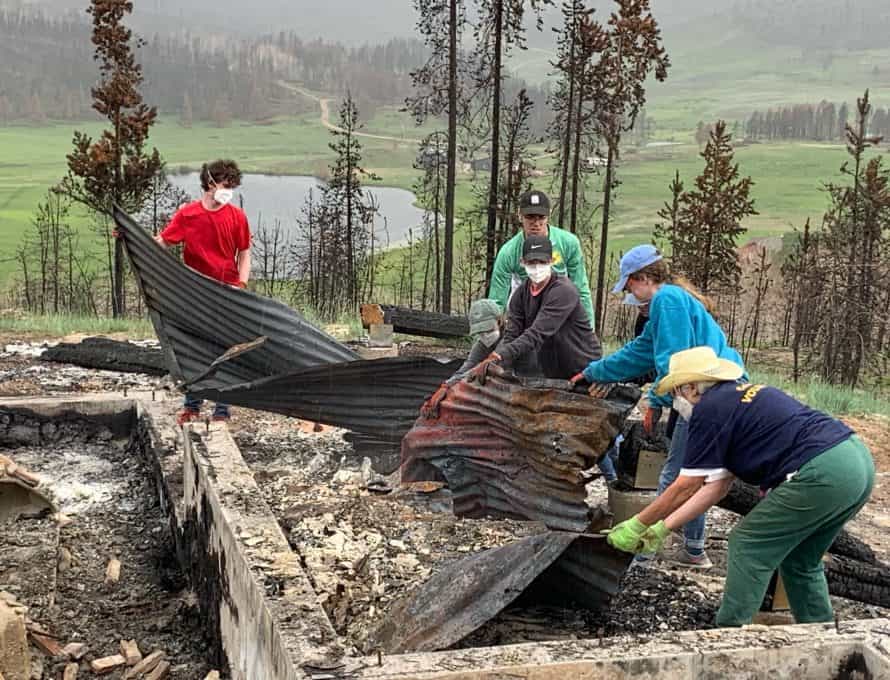 EAST TROUBLESOME, Colo. – In March, the Colorado Baptist Disaster Relief sent out the call that they needed teams to come to Grand County, CO to assist their efforts helping locals recover from last fall’s East Troublesome wildfire. Ignited on October 14, 2020, East Troublesome burned at a staggering pace, blazing through over 100,000 acres in one day, making history as the largest single-day wildfire burn in state history. By the time the fire was contained on November 30, 2020, it had burned nearly 200,000 acres and crossed the Continental Divide, forcing tens of thousands of evacuations and reducing hundreds of structures to a pile of toasted ash. 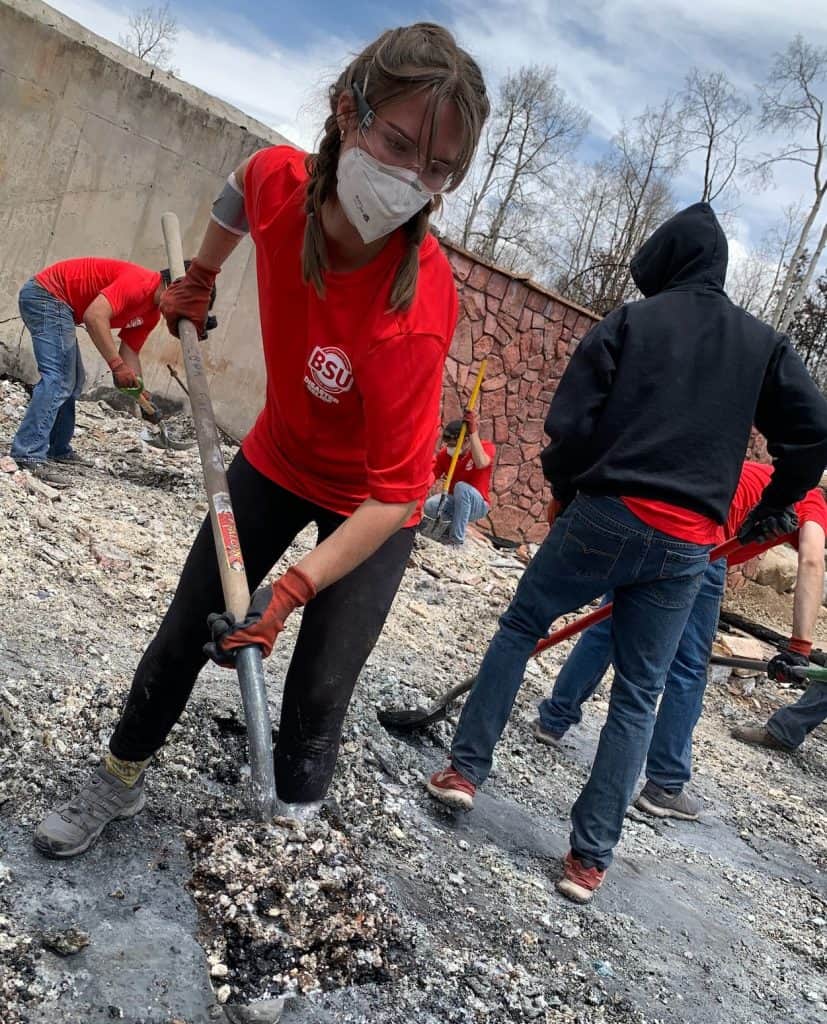 EAST TROUBLESOME, Colo. – Maggie Brister, a Missouri Southern State University (MSSU) student and member of Forest Park Baptist Church, Joplin, helps to clear ash and debris from the remains of a building that was destroyed during a fire last year. She went on the trip with the Baptist Student Union at MSSU. Forest Park Baptist Church lended the BSU group a van for the trip.
(Photo courtesy of Mo. DR)

When MBCollegiate Campus Missionary Jon Smith heard the CBDR team’s plea for help, he knew his BSU needed to respond. Ten BSU students felt the same tug. On June 20, the team, made up of Smith, his wife, and the ten students, drove to Winter Park, CO to meet with Denniz Belz, director of CBDR, and gear up for a week of shoveling ash.

Over the next five days, the team spotted for heavy equipment operators, sifted rubble in search of valuables, separated countless pounds of metal and shoveled innumerable buckets of ash. The tedious work left the team covered in ash from head to toe despite wearing masks and Tyvek suits. “This has not been an easy job,” says Dennis Belz, Director of Colorado Baptist Disaster Relief, “especially for all the teams from out of state that have come and had never done Ash Out and fire clean up before.”

The Grand Lake County Emergency Response manager conducted a briefing with the team, thanking them for their work and talking about how these kinds of situations are handled. “It turns out a lot of folks like the separation of church and state until emergency service is needed; then they love it if we work together,” Smith says.

As a whole, the trip “wasn’t overly spiritual,” says Smith, “You’re shoveling ash for 8 hours a day.” But as they surveyed the devastation around them, the team looked for opportunities to pray with the homeowners and share the gospel with them. “I was impressed seeing two of the young men praying with a property owner on site,” says Belz. During one unexpected occurrence, the team shared the gospel with a recent high school graduate who flagged them down for a ride into town on his way to Marine bootcamp.

“We cleaned up houses every day, and every day it was crazy to see that nothing was left except ash,” says Missouri Southern student Kristin Yeager. The sudden and total devastation was eye-opening for the team. “It was a great reminder of how temporary this life is and how we as Christians have in our eternal lives with Jesus,” Yeager reflects.

While storms and floods usually leave a few remnants behind, fires burn everything. Wildfires like East Troublesome burn hot enough to melt glass. Brick and concrete walls become so brittle that they sometimes crumble to the touch. Metals warp or melt. At one site, the team found puddles of aluminum that had once been a boat trailer. Most days, they were lucky to recover a few unbroken dishes.

That’s why one of the highlights of their trip was getting to return wedding rings to a couple after spending hours sifting through charred debris. “You tell yourself it’s just stuff,” the wife told Smith through tears, “then you get something back like this and you realize it isn’t.” Her husband was at work when the call to prepare for evacuation arrived. Evacuation warnings are usually given 2-3 days in advance and followed up with an official evacuation order if necessary, leaving residents sufficient time to grab their valuables and exit safely. But with East Troublesome tearing through over 100 acres per minute on its peak day, the couple, who own an ice cream parlor in Grand Lake, had only a twenty-minute warning to evacuate.

The team worked hard every day, laughing, joking, and discussing what they were seeing and experi