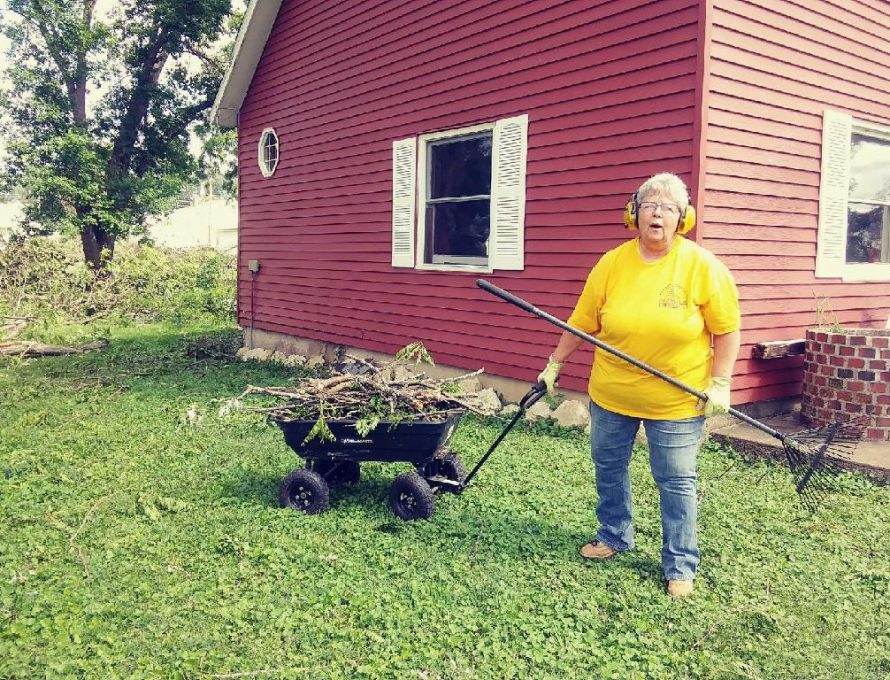 PERRY – Patsy Whitley, a Disaster Relief worker helps clean up debris in Perry after a windstorm caused damage in that northeast Missouri community on July 12. Whitley is a member of First Baptist Church, New London. (Pathway Photo by Al Groner.)

PERRY – Wide-spread damage of trees and branches was reported in northeast Missouri after strong winds, up to 90 miles per hour hit the area.

Al Groner, Northeast Regional Coordinator for Missouri Baptist Disaster Relief, said the Mark Twain Lake area, Monroe City, and Center all had some damage. However, none of them had damage to the degree of Perry, and only Perry needed Disaster Relief assistance.

Many streets were clogged with downed limbs and some property was damaged. There were apparently no injuries.

The storm knocked out power, and as of July 12, some had already been without power for two days. Utility crews from other areas were assisting getting power restored.

Groner said with the power outages, many people temporarily moved out, and it wasn’t clear how many more needed help.

“I believe Perry had winds only, but there were possible tornadoes in the area,” Groner said

Crossroads Association Disaster Relief was on scene Saturday morning, July 10, to begin chain saw work to remove downed limbs, and chain saw use comprised the bulk of the work.

Groner was hopeful most of the work might be done by July 16 or 17.

Disaster Relief teams were using First Baptist, Perry as an operations base.