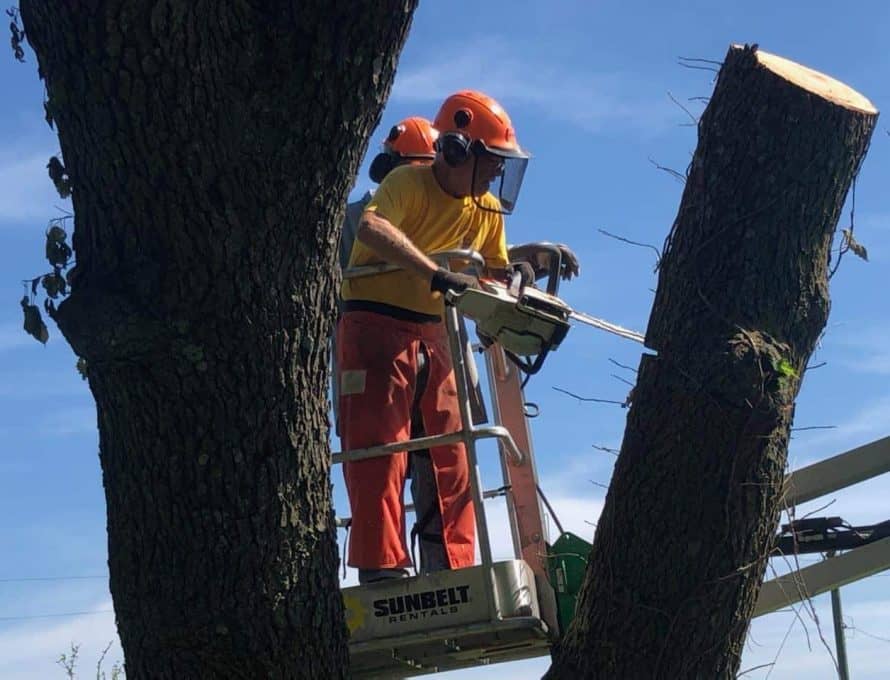 HOLT – A chainsaw crew from the Disaster Relief team of Clay-Platte Baptist Association cut trees down that were damaged in a late June windstorm. (Photo courtesy of Gary Tracy)

As of press time in mid-July there were three active Disaster Relief operations currently in motion in Dexter, Marshall and Perry.  Other groups have been working in the Holt and Kearney area as well as teams deployed to Colorado to do ash out work from wildfires last year.

In Dexter, an F-2 tornado touched down Saturday, July 11th.  It damaged the Southeast Health of Stoddard County hospital as well as a car dealership and several homes, trees and power lines.  Dexter is in Southeast Missouri.

MBC Disaster Relief southeast regional coordinator Eddie Barnhill reported there was damage to a 10-12 block area.  He said most of the residential damage was not severe enough to cause the homes to be a total loss.

“We had lots of trees and power lines down.”  This became the focus of the DR units deployed there as they pulled in chainsaw recovery units from 3 nearby associations.  A shower unit was provided for the workers and the community and the First Baptist Church of Dexter provided meals and a place for the incident management team to set up to oversee the ministry.

Barnhill said there were 30 volunteers who had been engaged as of July 13th.  He said, “I expect we will (finish) up the work here in a few more days – possibly Thursday (July 15th).”

Flooding was the problem in Marshall in western Missouri.  Pastor John Mohler has been leading a team of volunteers from northwest Missouri.  Mohler is the northwest region coordinator for MBC Disaster Relief.  They were helping clean out homes that were flooded from heavy rains in June.

Likewise in eastern Missouri, Al Groner, the director of missions for Bethel Baptist Association, Hannibal, was leading teams to work in the community of Perry in northeast Missouri.  A  strong windstorm took out power and trees in that community on Saturday, July 11th.  Groner, the northeast regional coordinator for MBC DR was calling for recovery teams to use chainsaws to remove trees from the top of buildings. Much of the community was out of power.

In the western Missouri communities of Holt and Kearney volunteers from Clay-Platte Baptist Association were working on downed trees and some flash flooding damage from a storm on June 11th.  They responded with chain saw crews in those two communities and did some work in Excelsior Springs as well.

Gary Tracy, the blue hat (team leader) of the crew said in an interview on June 25th, “We are still today picking up requests for help. Excelsior Springs, Mo., was hit really hard and the city is not picking up limb trash.  Not only are some people not able to cut down trees or cut up fallen trees and handle large limbs, they don’t have a way to haul it all off to the dump.”  The DR volunteers responded to the communities to help clear the streets and the neighborhoods of storm debris.

He said the volunteers always leave a signed copy of the Bible for each homeowner and they circle up and pray for them as they finish the job.

There were volunteers from that area who also went to Colorado in early July  to do ash out work, cleaning up ashes and debris for homeowners who lost residences from forest fires in the summer of 2020.

Moss remarked it is always good to be trained and ready even when not busy because that can change quickly.