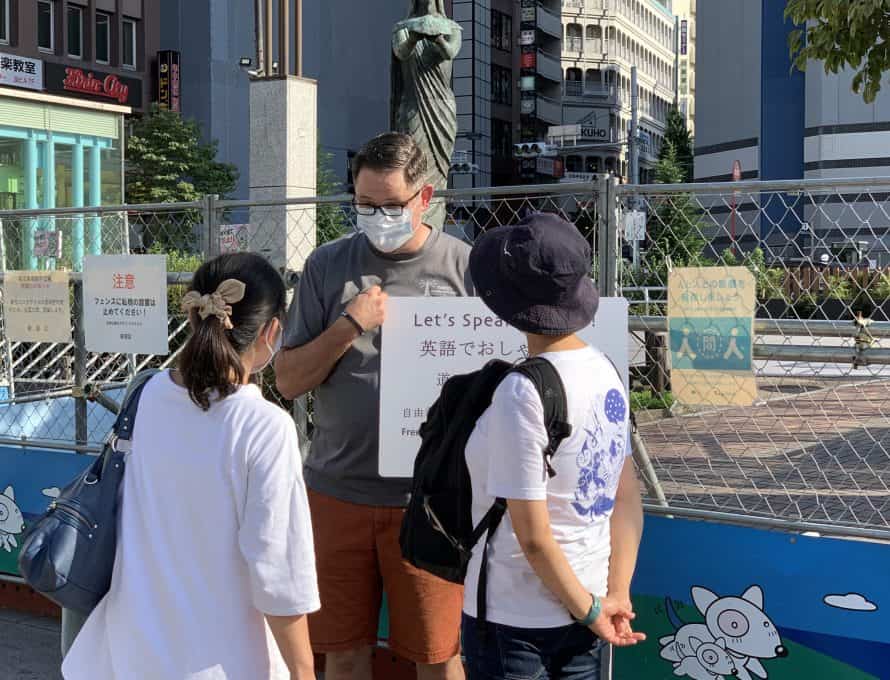 IMB missionary Donn Broeker speaks with two Japanese women who stopped to practice speaking English. Missionaries in Japan are hitting the streets during the Olympics to offer opportunities for people to practice English for five minutes. Broeker and other IMB missionaries also share the gospel and hand out gospel materials to those who are interested. (IMB photo)

Concrete walls enclose home-like prisons where Japanese men and women suffer in silence. Already small apartments became prison cells because of COVID’s sentence of solitary confinement, with the hope of parole like an ever-setting sun on the horizon. Pandemics have no due process and exacerbate a long-standing problem of loneliness that has plagued Japanese people.

Before the pandemic, International Mission Board missionaries Carlton and Cornelia Walker and Daniel and Tara Rice prayed the Olympics would lead to an increase in an openness to the gospel. That hasn’t necessarily been the case, due to the strict restrictions on the Games and local disapproval of the Olympics not being canceled.

What is leading to an interest in faith is Japanese people’s desire for connection. IMB missionary Donn Broeker said he believes many Japanese are eager to connect with others, especially after 17 months of COVID restrictions.

“Frequent states of emergencies and a lot of isolation have left many folks lonely, and I would say they have an even greater hunger for hope,” Broeker said.

Broeker and his wife, Teresa, are from Michigan and South Carolina and are the regional leaders for Japan.

“Many Japanese do not feel like anyone truly knows them. In some cases, not even their spouses. The culture considers it honorable to suffer in silence. This means you do not bother others with your troubles, but instead, keep things to yourself,” Broeker explained.

“I have had friends express that everyone has their own problems, so they don’t want to bother others with theirs. This mindset provides challenges in the church when it comes to sharing weaknesses and struggles with other believers. This is very hard for most to do,” Broeker continued.

The Japanese view of suffering differs from the West.

“Suffering is not necessarily something to be questioned here. It’s considered pointless to ask, ‘Why did this happen?’ Rather, it is a noble thing to endure hardships,” Broeker said.

The nobleness of suffering has its root in the core value of honor. Japanese culture centers around honor and shame, and bearing one’s burdens is considered honorable, and revealing weakness and emotion are seen as signs of weakness and is met with criticism and shaming.

“The nail that sticks out gets hammered down” is a phrase used to describe the centrality of conformity in Japan, and aberrations from the norm and expressions of individuality that detract from the social symmetry are met with resistance.

COVID has led to a hammering of hearts.

In addition to lockdowns and states of emergency, high unemployment rates, loneliness, anxiety and working long hours contribute to the feeling of isolation and despair.

“I see isolation as a tool that Satan tries to use to keep Japanese from the gospel. The father of lies tells Japanese people that no one really knows them or truly cares about them. He also tells them that their worth and value are determined by how they perform. There is so much pressure here to be perfect,” Broeker said.

“As we know, these ideas are the exact opposite of the message that God would share and the message of the gospel that tells us about God’s love and mercy. His love is not based on who we are or what we can do but rather His own goodness, mercy and grace. This is the message that millions of Japanese people need to hear,” Broeker continued.

Japanese culture is infused with a strong sense of duty, and a person’s worth and dignity are determined by it. Walker, a veteran missionary who has served in Japan for more than 40 years, said it is effective when the gospel is framed as a broken relationship restored through Jesus’ suffering on our behalf.

Broeker and IMB missionaries Scott and Julie Bradford and Rick and Hiromi Price recently participated in an outreach near a heavily trafficked area of Tokyo.

The couples handed out gospel materials, including Christian manga, Japanese comic books, and Olympic trading pins their team designed as a tool to share the gospel. A booklet IMB missionaries are distributing about missionary and Olympian Eric Liddell has been well received, Scott said.

“As we go out each day, we’re asking that God prepare the hearts of those that He will place in our path, and we are also praying for boldness,” Scott said.

It has been a year and a half of suffering in silence. Join Broeker and IMB missionaries in praying for Japanese to reach out from their cells of isolation.

With the eyes of the world on the country during the Olympics, the nation is still in the throes of the states of emergency. However, hope is on the horizon in the country known as the land of the rising sun.