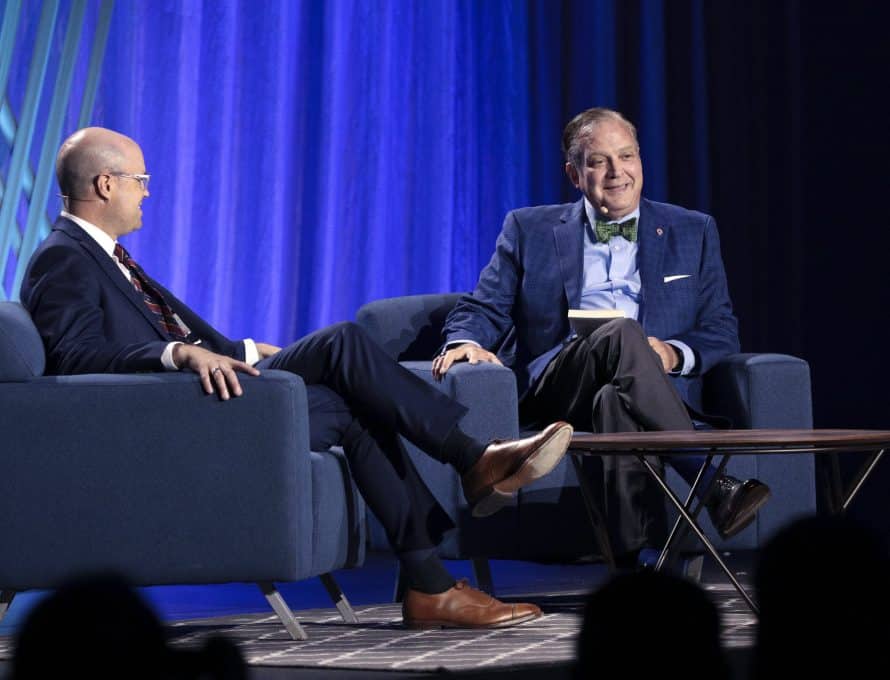 NASHVILLE (BP) – A theology of conversion, such as Christianity, necessitates religious liberty because regeneration of the heart cannot be achieved by coercion, Albert Mohler said, June 15, during “Baptists Thinking Biblically: A Conversation on Religious Liberty.”

The late-night event, hosted by Southern Baptist Theological Seminary at the Music City Center in Nashville, featured Mohler, Southern’s president, and Andrew Walker, associate professor of Christian ethics and apologetics and associate dean of the school of theology at Southern.

“In the history of Western civilization,” Mohler said, “religious liberty as we know it really came out of a culture committed to the understanding of human beings as imago Dei – made in the image of God – of a conversionist faith that, though obscured during the Middle Ages, still made a distinction between those who professed the faith and those who did not.”

Originally, religious liberty did not mean a freedom to reject belief in God “because that wasn’t even an intellectual option,” Mohler said. It meant a freedom “not to be coerced – especially after the Reformation – into a particular confession, be it Catholic or Protestant.”

Religious liberty sounds so strange to many now “because the default position is no longer theistic belief but the secular condition,” Mohler said.

Walker, who also serves as director of the Carl F.H. Henry Institute for Evangelical Engagement at Southern, said even secular historians would say the ideas of human rights and human dignity “are inseparable from the advent of Christianity taking on particular cultural relevance.”

“So, for the first time, the human person is not merely someone that can be discarded,” Walker said. “They’re not a cog of the status collective. They have a conscience. They are possessed with reason.”

Human beings “come to conclusions about really significant matters on their own terms,” Walker said, “and if that’s the case, it means inherently you cannot coerce faith. Coerced faith is a contradiction in terms.”

Baptists, Mohler said, are tempted to do two things with religious liberty.

“Number one is … to argue for religious liberty for the right people and not for the wrong people without recognizing that unless religious liberty is within constitutional bounds for all, then you have a de facto state-sanctioned church,” Mohler said.

“The other thing I think Baptists mess up is that when we become dominant in a culture, we tend to lapse into cultural Christianity, and then we discover that there’s really no confession or conversion here. That’s one of the reasons why people in the South are so surprised [about what] is going on with social transformation because they thought all these people were Christians. Well, it turns out, no, they actually weren’t,” Mohler said.

Such people merely acted like Christians because society suggested that’s what they were supposed to act like, Mohler said, and now that society says not to act that way, “they don’t act that way anymore.”

Mohler asked Walker what good religious liberty is if no one wants to live according to the Scriptures anyway. Walker said it affords Christians an opportunity to encourage their neighbors to honor God through appeals to creation order and natural law.

“We’ve got to be able to have those arguments at our disposal to bring them into the public square to say to the world, ‘We’re not the weird ones for believing that males and females are biological categories that are fixed and unalterable,’” Walker said.

At its root, religious liberty is about the ability to proclaim the Gospel without any hindrance, Walker said.

Mohler addressed the fact that evangelicals may find themselves in a different world this time next year if the Equality Act is made law.

“I don’t think the average evangelical understands that their Christian school could basically be put out of existence,” Mohler said “… You can say, ‘Well, that would never happen with the Supreme Court.’ Well, let’s put it this way: That means that nothing is stopping the absolute denial of religious liberty except some majority of justices on the Supreme Court, we hope.”

Walker said if conservatives and Christians are looking to the U.S. Supreme Court as their last resort, “that is a false hope” because by the time a case gets that far, all other recourses have failed amid the deterioration of the culture.