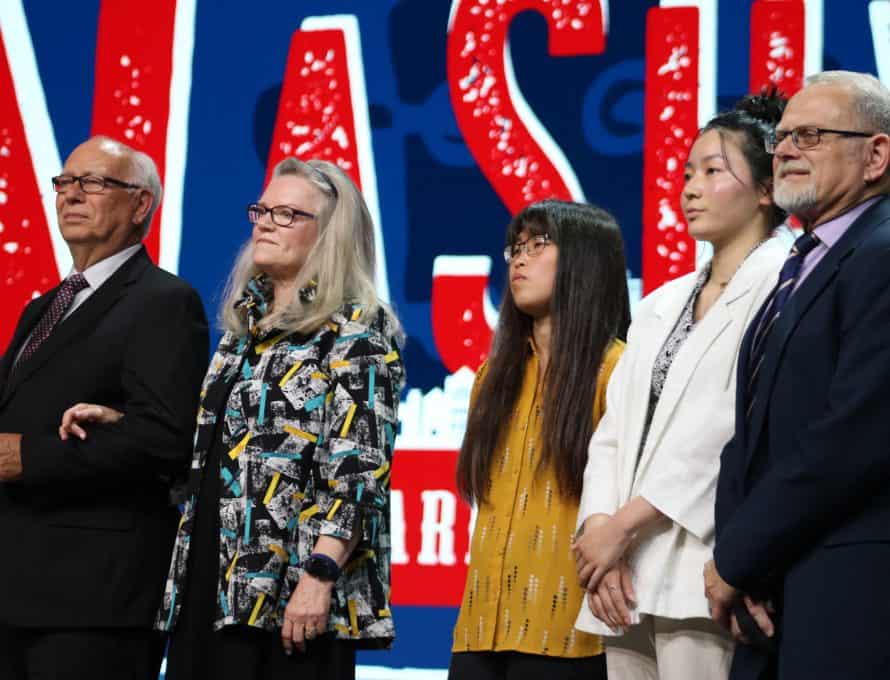 NASHVILLE – Southern Baptist Convention (SBC) officers elected by messengers during their 2021 annual meeting here were welcomed to the stage at the end of the meeting, along with family members. Missouri Baptists elected to serve as officers are pictured above: At left, SBC Recording Secretary John Yeats, who serves as executive director of the Missouri Baptist Convention, standing alongside his wife, Sharon; at right, SBC Registration Secretary Don Currence, who serves as administrative pastor of First Baptist Church, Ozark, standing alongside his daughters (from left to right), Hannah and Leah. (Pathway photo by Benjamin Hawkins)

With 15,726 messengers and 3,856 guests, the meeting was the largest SBC gathering in more than two decades.

Several Missourians were elected or appointed to leadership within the SBC during the meeting.

On June 14, prior to the SBC annual meeting, members of the SBC Executive Committee (EC) chose Monte Shinkle, pastor of Concord Baptist Church, Jefferson City, to serve as EC secretary.

Don Currence, administrative pastor at First Baptist, Ozark, was reelected by acclamation as SBC registration secretary. Kathy Litton, who delivered Currence’s nomination speech, was elected to the position over Currence at the 2019 annual meeting in Birmingham but was unable to fulfill it last year after the Orlando gathering was canceled due to COVID-19. Litton stepped down from the position earlier this year when her husband, eventual SBC President Ed Litton, announced his intentions to accept a nomination for the position.