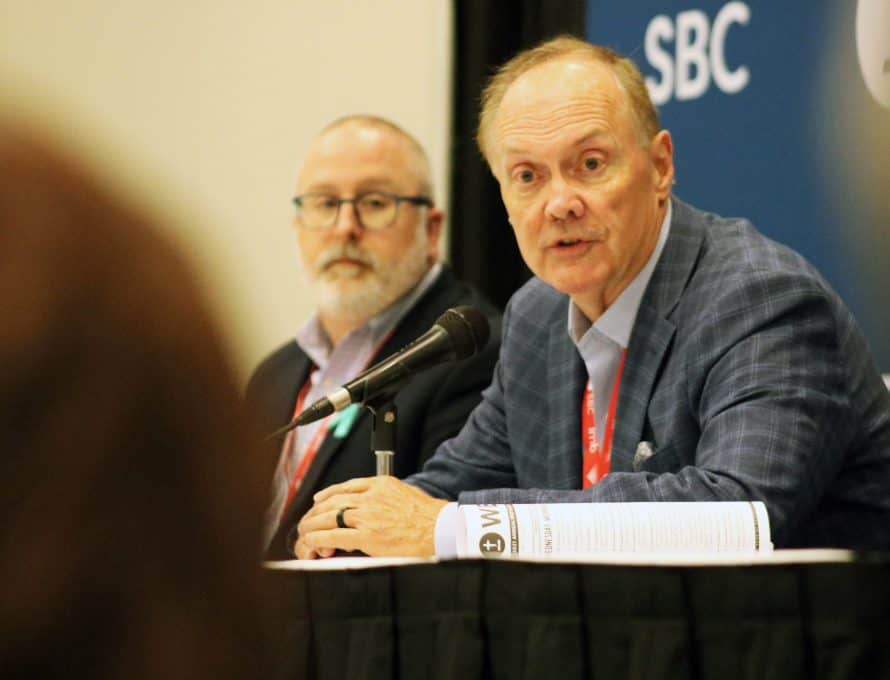 NASHVILLE (BP) – Messengers to the 2021 SBC Annual Meeting approved a broad resolution on the Bible’s sufficiency regarding race and racial reconciliation, June 15, but chose not to explicitly address the contentious issue of critical race theory.

• A denunciation of any attempt to rescind the Hyde Amendment, which prohibits federal funding of abortion.

• Opposition to the Equality Act, a far-reaching gay and transgender rights bill that critics warn would devastate freedom of religion and conscience, as well as protections for women, girls and unborn children.

Because of a lack of time, the committee tabled a resolution that would have affirmed the “Christian ideal of citizenship” under the Lordship of Jesus and would have condemned the January invasion of the U.S. Capitol as “inconsistent with faithful Christian citizenship.”

The Resolutions Committee chose not to address the issue of critical race theory (CRT) in the first SBC annual meeting since the passage of a 2019 resolution on CRT and intersectionality developed into a divisive point of contention during the last two years.

Critics within the convention who have decried CRT’s use and have labeled it as Marxist have warned it has gained influence in Southern Baptist institutions and churches. Meanwhile, other Southern Baptists have denied the charges, saying CRT is not impacting SBC life and contending those in the SBC concerned about racial justice are following New Testament teaching, not secular ideologies.

The resolution quoted from Scripture and the Baptist Faith and Message 2000 (BF&M), the SBC’s confession of faith, regarding race and racial reconciliation before affirming the Bible’s adequacy on the issues.

The resolution also repudiated “any theory or worldview that denies that racism, oppression, or discrimination is rooted, ultimately, in anything other than sin.”

It also reaffirmed the resolution regarding racial reconciliation on the SBC’s 150th anniversary in 1995 in which messengers apologized to African Americans for “condoning and/or perpetuating individual and systemic racism.”

The Resolutions Committee’s decision not to confront CRT explicitly met with brief opposition from the floor.

Kevin Apperson, pastor of North Las Vegas (Nev.) Baptist Church, said the resolution consisted of “nebulous, unclear and ambiguous language that speaks concerning the content of critical race theory but never has the courage to address it by its name. If we do not have the courage to call a skunk a skunk, let’s not say anything.”

James Merritt, chairman of the Resolutions Committee, replied by saying, “It’s time to find out who we are and where we are headed.”

“[W]e are not the 2019 Resolutions Committee. We are the 2021 Resolutions Committee,” said Merritt, pastor of Cross Pointe Church in Duluth, Ga., and a former SBC president. “What we have done in this resolution is say, ‘You know what, let’s just [settle] this once and for all, yesterday, today and forever.’”

Todd Benkert, lead pastor of Oak Creek Community Church in Mishawaka, Ind., immediately called for a vote from the floor, and messengers agreed by the two-thirds majority required. Messengers then approved the resolution by a strong majority.

The disagreement over CRT entered another facet in SBC life when the presidents of the six Southern Baptist seminaries issued a statement in November 2020 that said “affirmation of Critical Race Theory, Intersectionality and any version of Critical Theory is incompatible with the Baptist Faith & Message.” The statement reaffirming the BF&M 2000 condemned “racism in any form.”

The National African American Fellowship of the SBC objected to the seminary presidents’ broad condemnation of CRT, saying “certain limited insights from CRT, not as an ideology or worldview, can be useful to identify and repudiate racial bias and systemic racism in organizations and institutions.” The seminary presidents’ statement had “the effect of delegitimizing and dismissing the lived experiences of African Americans and other ethnic groups,” according to the NAAF.

Messengers to the last SBC annual meeting, held in 2019 in Birmingham, Ala., approved Resolution No. 9 on CRT and intersectionality with a strong majority. The resolution affirmed the Bible as “the first, last, and sufficient authority” regarding how the church tries to amend social evils and said CRT and intersectionality should only be used in submission to Scripture.

The 2021 Resolutions Committee’s report showed it received 10 proposed resolutions on various theories regarding race, but it chose to combine them into a general statement.

In a resolution strongly opposing the Equality Act, messengers approved language that described the proposal as “one of the greatest threats to religious liberty in our nation’s history.”

The bill, which has already gained approval by the U.S. House of Representatives, would add “sexual orientation” and “gender identity” to the classifications protected in federal civil rights law. “Sexual orientation” includes homosexuality, bisexuality and pansexuality, while “gender identity” refers to the way a person perceives himself regardless of his biology at birth.

The Equality Act fails to protect the freedom of religion and conscience of faith-based adoption and foster-care agencies, as well as religious hospitals and health-care workers, the resolution said in echoing warnings already issued by the Southern Baptist Ethics & Religious Liberty Commission. It also would threaten the Hyde Amendment and erode civil rights protections for women and girls, according to the resolution.

In addition to opposing the Equality Act, the resolution encourages “love and compassion” toward those who identify as gay, lesbian, bisexual or transgender and the proclamation of the Gospel of Jesus to them.

In other resolutions business, the messengers’ passage of the statement on the Hyde Amendment was the latest in a four-decade-old series of resolutions opposing abortion and federal funding of the procedure.

The resolution served as a response to President Biden’s budget proposal issued in late May that failed to include the 45-year-old Hyde Amendment and other pro-life policies in federal programs. If Biden’s proposal succeeds, it would mark the first time since 1976 the Hyde Amendment has not been enacted.

The Hyde Amendment, which must be approved each year as a “rider” to a spending bill, prohibits federal funds in Medicaid and other programs from paying for abortions. The ban is estimated to have saved the lives of more than 2.4 million unborn children.

The resolution urged Biden and Congress to preserve Hyde and all other pro-life amendments. It also urged Southern Baptists to “work through all available cultural and legislative means to end the moral scourge of abortion as we also seek to love, care for, and minister to women who are victimized by the unjust abortion industry.”

A day after overruling the Resolutions Committee, messengers also adopted a resolution June 16 calling for “abolishing abortion immediately, without exception or compromise.”

The resolution on abolishing abortion was revived in a motion by Bill Ascol, pastor of Bethel Baptist Church of Owasso, Okla., who had initially submitted the resolution. It is perhaps the strictest antiabortion statement messengers have adopted in nearly 50 years. A resolution adopted in the 2018 SBC Annual Meeting reaffirming the full dignity of every human denounced “every act of abortion except to save the mother’s physical life.”

The resolution drew several minutes of contentious debate Wednesday, even as each messenger who spoke affirmed a pro-life position. Critics said the resolution was poorly written and would discredit all attempts to restrict but not eliminate abortion – such as bans on partial-birth abortion or so-called “heartbeat” laws.

The resolution was adopted after it was amended with the addition of one word: “alone.” The paragraph that then read, “RESOLVED, that we will not embrace an incremental approach alone to ending abortion because it challenges God’s Lordship over the heart and the conscience, and rejects His call to repent of sin completely and immediately.” The resolution terms abortion a Great Commission issue, and laments “any complicity in recognizing exceptions that legitimize or regulate abortion.”