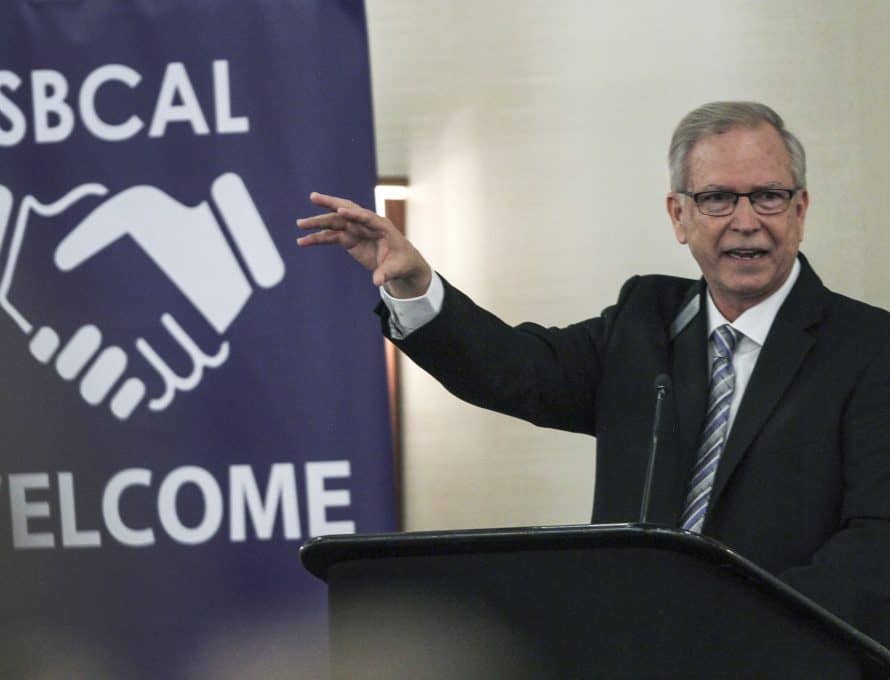 NASHVILLE (BP) – The Southern Baptist Conference of Associational Leaders (SBCAL) met Sunday (June 13) for a time of worship and discussion around becoming a “Gospel Driven Association,” passionate in their pursuit to make Christ known among the nations by encouraging churches to be Gospel- and relationship-focused.

The group met at the Sonesta Nashville Hotel for the opening session of its two-day conference prior to the start of the 2021 SBCAnnual Meeting. Around 400 people registered for the group’s 61st annual conference – the largest number in more than 15 years.

Tony Wolfe, associate executive director of the Southern Baptists of Texas Convention, opened the meeting in worship and prayer before Ray Gentry,SBCAL president and associational mission strategist for the Southside Baptist Network in Georgia, introduced the meeting’s theme: The Gospel Driven Association. The theme is rooted in “The Gospel Driven Church: Uniting Church-Growth Dreams with the Metrics of Grace,”a book by Jared Wilson, assistant professor of pastoral ministry and author in residence at Midwestern Baptist Theological Seminary.

In three workshops, speakers discussed the five metrics of grace covered in Wilson’s book: a growing esteem for Jesus Christ, a discernable spirit of repentance, a dogged devotion to the Word of God, an interest in theology and doctrine and an evident love for God and neighbor.

Gentry said he believes the sessions will assist associational leaders to be proactive in encouraging pastors and churches to be Gospel-centered and use the five metrics of grace as a measurement for growth rather than attendance, financial and baptism statistics.

International Mission Board President Paul Chitwood spoke on “the urgency of the mission.” He began with Revelation 22:20-21. In this final promise of scripture, Jesus declares His plans to return for His people. He emphasized the importance of churches living out the Great Commission as though Jesus were returning today, even this very minute.

“I believe the most important days of the local association are before us, not behind us,” Chitwood said.

Chitwood stressed the urgency of evangelism, sharing that 155,473 people die every day lost and without the Lord. However, he also expressed hope in statistical comparisons between 2019 and 2020. Even during the COVID-19 pandemic, numbers of global faith professions increased by 55,000, the number of people who heard the Gospel increased by 250,000 and the number of new churches planted increased by 3,000. Much of the increase occurred in South Asia.

Finally, Chitwood discussed the bride of Christ, the church, saying that once the bride is ready, Christ will return. Until then, he said, God’s people still have work to do, and it is an urgent mission.

During lunch, the group devoted time to pray over Gentry’s family. He thanked everyone for their prayers as one of his daughters continues to battle cancer.

In his president’s address, Gentry expressed praise of growing membership and participation in the SBCAL. He also invited the conference to celebrate the publication of its book The Baptist Association: Assisting Churches and Advancing the Gospel, written by various members of the SBCAL.

He challenged members to sow Gospel seeds, work hard, display unity, the fruit of the Spirit and love for neighbors as they work with pastors and denominational leaders in their region.

Ronnie Floyd, president and CEO of the SBC Executive Committee, closed out the luncheon with an emphasis on cooperation for the Gospel, relationships and the proposed Vision 2025, the SBC’s evangelistic goal to increase the global reach of the Gospel.

“The Gospel always travels on the tracks of a relationship,” Floyd said.

He outlined three of the five aspects of Vision 2025: Increasing the number of missionaries in the field by “calling out the called,” reversing the decline in teenage baptisms (a 42 percent decline since 2000) and increasing giving to the Cooperative Program, Southern Baptists’ unified channel of giving to support missions and ministries around the world. He encouraged SBCAL members to attend the Vision 2025 presentation Tuesday (June 15).

All meetings and workshops from this year’s SBCAL convention will be accessible for conference members online at www.sbcal.org beginning in July. It is currently $25 to become a member and receive access to videos and future events. Beginning July 1, the price increases to $50.

(This article was written by Kirbi Cochran for Baptist Press.)