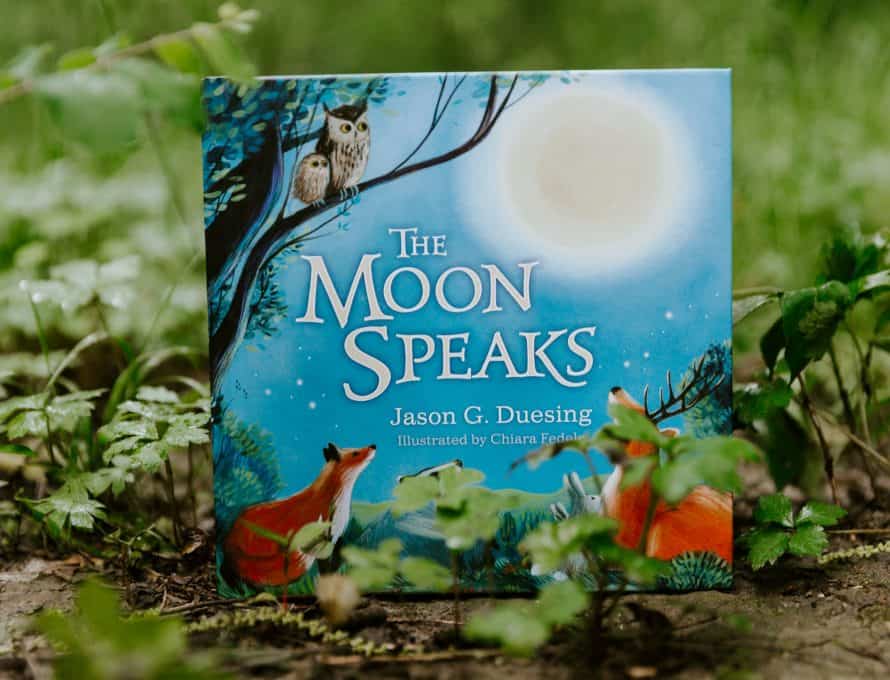 KANSAS CITY – Love for nature fills Jason Duesing’s home in Kansas City. Duesing, provost and professor of historical theology at Midwestern Baptist Theological Seminary, makes sure of that. Inspired by trees, he loves the color green. He often sketches trees and mountains, and his children playfully call him “The Lorax” – the Dr. Seuss character that loves nature and “speaks for the trees.”

In fact, the Duesing family’s love for nature inspired a new children’s book, The Moon Speaks, released by B&H Kids on May 25.

“The Moon Speaks started as a family song that turned into an illustrated conversation about the world God has made,” Duesing said in a Q&A on Midwestern Seminary’s blog, www.ftc.co. “I wrote this book for families of all kinds who have ever looked outside and wondered or were inspired to sing. I hope this book might help them look further upward to see and learn more about the God who made it all and them.”

Duesing said he hopes the book “will point the youngest readers and listeners, and those reading to them, to God and to aid them to grow in their understanding of God and how he wants them to understand the world around them.”

He called his partnership with the book’s illustrator “one of the more enjoyable creative experiences I’ve had in writing a book.” The illustrator, he said, translated his words and gave them life through “magnificent portraits of nature and wildlife.”

“My favorite illustration, if I had to pick only one,” he said, “is the mountain lake only because the illustrator captured almost precisely what I described in words. I was inspired by a family summer hike around Lily Lake in Rocky Mountain National Park, and without having seen that lake, the illustrator created an almost exact replica.  So much so, when I see those pages, I think immediately of our family experience there, which was a wonderful time.”

The Moon Speaks, Duesing added, introduces children to the concept of “general revelation.”

“The funny thing is, in our world, trees do have ‘tongues.’ Or at least, Scripture says they can speak and do speak for themselves. Ps 19:1 says, ‘The heavens declare the glory of God, and the sky above proclaims his handiwork.’ Indeed, God’s creation speaks, but there is a limit to what creation can say and about what it can speak. Therefore, what does creation say?  Why does creation say it?

“The answers to these questions is what Christians call the biblical doctrine of general revelation. Though God’s revealing himself through creation has limits—it does not show salvation through Jesus Christ—it points humans to God and reveals parts of God’s attributes and character. …

“For children, who haven’t yet seen fully the effects of sin on the world and throughout humanity, to grasp the goodness of God in what he has made is a strong foundation upon which they can build their faith as they grow.”