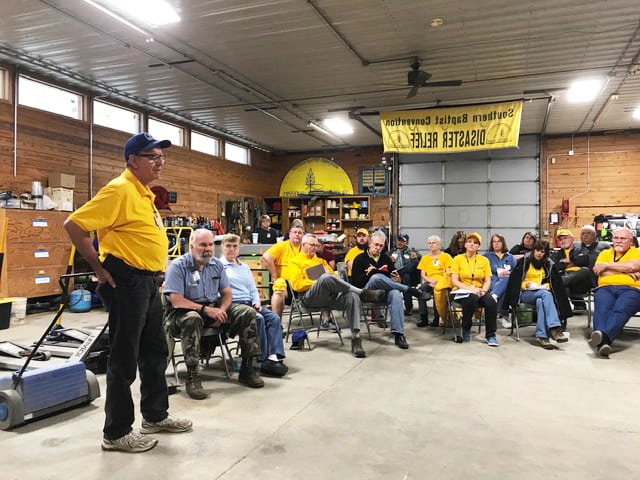 JEFFERSON CITY – The MBC Disaster Relief (DR) communications team prepared for a simulation exercise in the High Point DR readiness facility on a Saturday morning in late April. Here Jerry Palmer, the leader of the communications team speaks to members of the team along with DR leaders who are trained in Incident Management as they prepare for the simulation. (Pathway photo by Richard Nations)

JEFFERSON CITY – What started out as a project of the MBC Disaster Relief (DR) communications team to practice how they would deploy in a disaster situation, morphed into a full-scale disaster drill on a recent April weekend in Jefferson City.

Jerry Palmer, the coordinator of the MBC DR communications unit asked for volunteers to come together for a training session at the MBC Disaster Relief Readiness building outside of Jefferson City.  He said he expected a dozen to sign up.  Instead about 40 volunteers responded, including several who are on the central leadership of MBC DR and who are involved in the Incident Management Team (IMT).

So they planned a disaster drill to be conducted in the large readiness building/warehouse which is also known as the High Point Road building.  They organized the group with a drill which was based on the scenarios of the 2017 floods in several southern Missouri communities.

A central IMT team was formed to be the statewide command center.  Five other IMT teams were “deployed” to the five “communities.”

An IMT team consists of: a “white hat” or incident commander as well as a logistics, operations, planning and administrative chiefs. And sometimes it has a chaplain, safety, liaison and public information officers.  In this drill a communications team member was attached to this IMT group.

The groups had to go to different parts of the DR readiness center and set up as if they were deployed in a disaster situation.  They created a coordination grid on a white board and they established lines of communication between the five Missouri communities and the statewide IMT group.  In some cases they were able to do this with phone or email contact and in other cases they relied on radio contacts.

There were some technical glitches encountered and there was some frustration with the linking up of the various teams and obtaining sign in credentials for the various computer networks needed to be connected. The groups tried various “work arounds” to overcome the technical problems they were experiencing.

Palmer said they were able to simulate getting the IMT groups established and functioning along with receiving work orders and deploying volunteers.  Communication and computer problems were identified.  In some of the “communities” there was no phone communication available so other solutions were being identified.

He said there is a need for more people on the team who understand and can work with IT (information technology) as more and more computers and devices need to be linked together during DR deployments.

One of the volunteers, John Gladden of Charrette Baptist Church, Marthasville said he is a retired engineer from the Boeing Corporation.  He has IT skills and sees that as a growing need for communications team volunteers.

Gladden has been involved in DR ministry since 1993, getting involved with the floods that year in the St. Louis region.

Wesley Hammond, a DR volunteer who trains the IMT teams for MBC DR said  he thought it was a very successful event. “Our trainees were engaged at a new level and have shown flexibility and proficiency.  Most of our people got thrown into a new situation.”  Hammond is pastor of First Baptist Church, Paris.

MBC DR Director, Gaylon Moss observed the simulation and remarked “The communication and IMT advanced training continues to position us to have a readiness posture.  We are grateful for the humility and teachability of the volunteers as they seek to serve the Lord through MBC DR.”

Persons interested in serving in DR or getting involved in the more specialized communications and IMT teams should check the requirements for those responsibilities at the MBC DR website: www.mobaptist.org/DR.  Some previous experience in DR is required for the IMT groups.