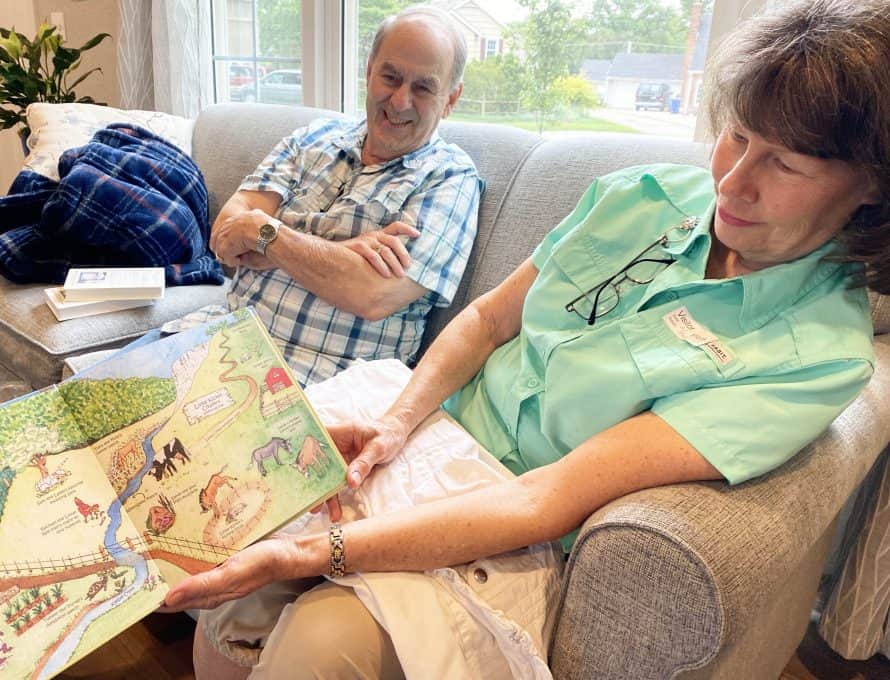 HERMITAGE – Sandy Sprott (right) and her husband Sam (left) look at one of the children’s books in her Little Kicker series. (Pathway photo by Brian Koonce)

HERMITAGE – In the late 1980s, Sandy Sprott, who now attends Wheatland Baptist Church, had an idea she just couldn’t shake. It was a book about a little donkey, named Little Kicker.

Actually, to be more precise, it was eight books about a little donkey named Little Kicker.

But Sprott was busy, happily following the path that God had set her on ministering to children and teaching others how to show kids God’s love. She didn’t have the time or mental energy to work on a new project. God, however, knew what was coming up a few chapters later in her life and left Little Kicker kicking around in her head as she went on about her life.

“I got the stories written in two weeks,” she said.

Five printings later, Little Kicker is now teaching children with his Bible-based adventures around the farm alongside Emma Cow, Rachel the Little Red Hen, Becky the Bunny and Tony the Pony.

“The first one – A Prayer for Little Kicker – is the best seller,” she said.

That book, which came out in 2011, is often used for baby dedications, Sprott said. Mama and Daddy Donkey gather all the critters of the farm together to pray over their newest addition, each one asking God’s blessing on Little Kicker. The story invites the grownups reading the book to pray over the child listening. Little Kicker grows in subsequent books and learns lessons along the way, each time learning a new biblical principal. The latter three stories are simple chapter books, letting children grow up with the series.

“They teach spiritual concepts and biblical values without being preachy,” she said.

Getting all eight stories on paper was easy – those ideas had been floating around in her head for a long time. But when it came to illustrating the series, Sprott faced a new issue altogether.

So Sprott, who already enjoyed painting with water colors, decided to learn to illustrate herself.

“I could draw something I could look at, but how do you create a figure? How do you make Emma Cow look like Emma Cow from the right, the left, the front, the back, leaning down, eating, and standing up?”

The answer is practice, practice and more practice.

“It took me four years, but I finally figured it out,” she said. “I’d get to the end of painting Book 1, and the figures were so superior to the figures at the beginning that I had to start all over again. “After four times through book 1, the paintings at the end looked like they did at the beginning and I knew I was done.”

Now, Sprott and her husband, Sam, travel the country selling the Little Kicker series and a matching plush Little Kicker at craft fairs. She said she gets two frequent questions from buyers of the books at those events: “She grew up on a farm… did she know a real-life Little Kicker?” and “Are there any more Little Kicker adventures in her head?”

The answer to the first question is no. They had everything else, but no donkeys. As for the second?

For more information about the series or to contact Sprott, go to www.littlekicker.com.